I won a copy of Ta-Nehisi Coates‘ We Were Eight Years in Power a while back. But it has been sitting on my shelf for too long. I read it now in my ongoing attempt to further educate myself.

“We were eight years in power” was the lament of Reconstruction-era black politicians as the American experiment in multiracial democracy ended with the return of white supremacist rule in the South. Now Ta-Nehisi Coates explores the tragic echoes of that history in our own time: the unprecedented election of a black president followed by a vicious backlash that fueled the election of the man Coates argues is America’s “first white president.”

But the story of these present-day eight years is not just about presidential politics. This book also examines the new voices, ideas, and movements for justice that emerged over this period–and the effects of the persistent, haunting shadow of our nation’s old and unreconciled history. Coates powerfully examines the events of the Obama era from his intimate and revealing perspective–the point of view of a young writer who begins the journey in an unemployment office in Harlem and ends it in the Oval Office, interviewing a president.

We Were Eight Years in Power features Coates’s iconic essays first published in The Atlantic, including Fear of a Black President, The Case for Reparations and The Black Family in the Age of Mass Incarceration, along with eight fresh essays that revisit each year of the Obama administration through Coates’s own experiences, observations, and intellectual development, capped by a bracingly original assessment of the election that fully illuminated the tragedy of the Obama era. We Were Eight Years in Power is a vital account of modern America, from one of the definitive voices of this historic moment.

Sooooo, I basically think every American should read this book. It’s eminently more engageable than I’d expected and I learned quite a lot. It’s not that I’d never encountered aspects of what Coates covered, many of the topics I’d studied in college 9at least shallowly). But that was a long time ago. He prompted me to think about things from angles I hadn’t before and does it all while centering it in and around his own experiences as a Black man in America. Which humanizes and relevantizes some of the histories that can feel out of reach due to the distance of time.

Admittedly, as Coates himself admits, he falls between an essayist and a memoirist (his own). So, the book doesn’t touch on intersectionalities of gender and race. Which is a shame, considering several of the essays touch on the politics around the dissolution of the family unit (or the fear, politicization, paternalism of it) and resulting female-led households. But I still think the book accomplishes what it set out to do. Absolutely, especially given current events, pick this one up people. 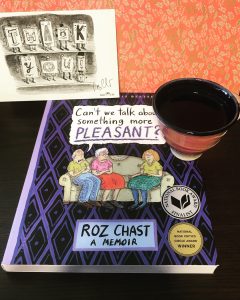 I won a signed copy of Roz Chast‘s Can’t We Talk about Something More Pleasant?

some time ago and then it got hurried on my book shelves. I finally rediscovered it.

Description from Goodreads:
In her first memoir, Roz Chast brings her signature wit to the topic of aging parents. Spanning the last several years of their lives and told through four-color cartoons, family photos, and documents, and a narrative as rife with laughs as it is with tears, Chast’s memoir is both comfort and comic relief for anyone experiencing the life-altering loss of elderly parents.

When it came to her elderly mother and father, Roz held to the practices of denial, avoidance, and distraction. But when Elizabeth Chast climbed a ladder to locate an old souvenir from the “crazy closet”—with predictable results—the tools that had served Roz well through her parents’ seventies, eighties, and into their early nineties could no longer be deployed.

While the particulars are Chast-ian in their idiosyncrasies—an anxious father who had relied heavily on his wife for stability as he slipped into dementia and a former assistant principal mother whose overbearing personality had sidelined Roz for decades—the themes are universal: adult children accepting a parental role; aging and unstable parents leaving a family home for an institution; dealing with uncomfortable physical intimacies; managing logistics; and hiring strangers to provide the most personal care.

Review:
It’s really a shame it took me so long to read this because I…well, I was going to say really enjoyed it, but that’s not the right way to phrase what I mean. One doesn’t enjoy a heart-wrenching story of a woman trying to deal with the death of her parents. But I could relate to it. There is a certain raw, scraped bare quality to the book that I didn’t expect, especially from a graphic memoir. The reader really feels Chast’s pain at the loss of her father and her disconcertion when dealing with her mother. Plus, Chast admits to feels a lot of us have probably had about their parents, but would rather hide the deep recesses of our mind and deny exist. All in all, a good read. 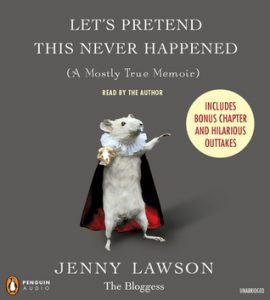 I borrowed the audio version of Let’s Pretend This Never Happened, by Jenny Lawson from the library.

Description from Goodreads:
When Jenny Lawson was little, all she ever wanted was to fit in. That dream was cut short by her fantastically unbalanced father (a professional taxidermist who created dead-animal hand puppets) and a childhood of wearing winter shoes made out of used bread sacks. It did, however, open up an opportunity for Lawson to find the humor in the strange shame spiral that is her life, and we are all the better for it.

Lawson’s long-suffering husband and sweet daughter are the perfect comedic foils to her absurdities, and help her to uncover the surprising discovery that the most terribly human moments-the ones we want to pretend never happened-are the very same moments that make us the people we are today.

Let’s Pretend This Never Happened is a poignantly disturbing, yet darkly hysterical tome for every intellectual misfit who thought they were the only ones to think the things that Lawson dares to say out loud. Like laughing at a funeral, this book is both irreverent and impossible to hold back once you get started.

Review:
I’ve loosely followed Jenny Lawson online for the last couple of years, generally since Beyonce the chicken went viral. So, I knew who she was going in. But honestly I only picked the book up because my book club chose it for the read this month. I opted for the audio version because I didn’t know that I would really feel invested in it otherwise. I don’t know if that would have been true or not, but I’m awful glad I got the audio. I think I got a lot more enjoyment out of hearing her tell her stories than I would have from reading them. Don’t get me wrong, she has a really recognizable voice, even when writing, but I’m glad I made the choice I did. I can always look at the pictures later. Surely someone will bring the actual book to our meeting next month.

I very much like the way Lawson set herself and her husband Viktor up as a double act or, what the Japanese would call Manzai. He’s the straight man, all reasonable and level headed and she’s the silly one, the funny (wo)man. Of course, it’s all from her perspective and a lot of her humor is at the expense of her own mental health, but it is still funny and endearing, as the affection for him (and eventually her daughter) definitely comes across.

In the beginning I was a little put off as the entries felt random. They were funny, but not much more. But eventually Lawson started pulling themes and life advice from the stories, which I thought went a long way toward making it feel less erratic. At times, the humor felt a bit contrived, like someone desperately seeking attention. But overall I enjoyed it.

All in all, good job book club. I wouldn’t have chosen it on my own, but I enjoyed it all the same.