I won a copy of A Trail of Pearls in an Instagram giveaway run by the author, D. M. George. 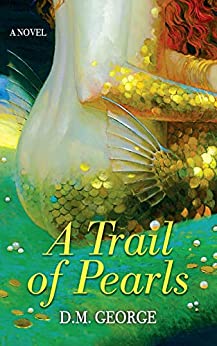 It was actually kind of perfect. My mom had a total knee replacement and I’d spent the week at her house helping her post-surgery. Her house is on a bit of a bay in Florida. She doesn’t live ‘on the water’ as in ocean views and million dollar price tags. But she does live on water. So, I’d spent a week smelling salty air and feeling sea breezes. Then I got home to a mermaid themed book and prize pack.

Fifty-five, frumpy, and flung to the curb like an old floral sofa…

Losing her Silicon Valley job to a younger woman was bad enough. Catching her husband in the arms of one is the final straw. Something’s gotta give, like the last threads of Perla Palazzo’s sanity.

Then, a plan so wild and reckless it’s just an inch to the left of self-destruction.

With a bank foreclosure hanging over her head and staring at the last of her savings, Perla books a trip to the Amalfi Coast in the hope of fulfilling her dreams to become a travel writer. But Capri’s deep azure waters are home to more than old wrecks and lost sailors, like Parthenope, an embittered, hard-drinking mermaid who believes the only way to enjoy men is crudo, with a sprinkle of salt and a generous squeeze of lemon.

When Parthenope gives Perla an enchanted cameo just days before she meets a dashing Italian tour guide, it seems the divorcée’s fortunes have turned. Timeless beauty, self-confidence—perhaps even love—are suddenly within tantalizing reach. But the siren’s song is both seductive and deadly, and a moment of weakness will leave Perla facing unthinkable consequences.

I really wanted to liked this book and really expected to. A frumpy 55yo is someone I thought I could relate to. But it became evident very early on that this wasn’t going to be the case. Which disappointed me, because the author sent me a copy along with a really lovely prize package. Look, I’m even using the coaster that came with it as I sit her writing this. And I hate to repay that with a shitty review. But, the honest truth is that I had to finish this by gritting my teeth. Though a lot of the reasons might not irritate others as much as me.

When I started writing this review, I was composing in my head and thought, “I could have liked it, except for one big issue.” Then I thought, “Well, two issues…um, maybe three…” This reluctant realization is what finally made me admit that I didn’t find a lot to actually like.

That first big issue to come to mind was that I simply did not like Perla. She’s self-absorbed, whiny, and shallow. And while I know this is the area she was meant to have personal growth in, she is like this all the way until almost the end. And, if I’m honest, I don’t see that she would have made the self improvements if not forced to. For most of the book she just feels like someone with…pretensions of Karen, I think is how I want to phrase it.

I was also annoyed that she was constantly moaning about being broke, but flew to Italy, booked a hotel, eats out, travels and shops constantly. If that’s what it feels like to be broke, maybe sign me up.

The second big thing for me (which could honestly top the first, except that it did tapper off past the halfway mark) is how often men are presented as predators. When I was on page 80 I made this comment on Goodreads:

I’m not sure I’ll b able to finish this.

I’m constantly having to read braced for the next indignity.

This easy use of rape and the pervasive idea that women are constantly in danger as mere plot devices is one of my biggest pet peeves. And once I’d encountered references to it several times before even the 100 page mark I literally read the whole rest of the book tensed for the next slap in the face. It gets hard to enjoy anything around that.

Third, there are some heavy themes addressed in this book. But in the end George solved everyone’s problem with a boyfriend. So, you have this book ostensibly about finding your own self-confidence and being strong older women, but the solution is to….*checks notes* find a man. Talk about taking the easy, cliched out. And that without addressing how fast these guarded,  jaded people fell in love.

The writing is on the pedestrian side , but there’s nothing wrong with it. It’s quite readable and the editing is clean. Plus, look at that cover; it’s gorgeous! I also appreciate the moral of the story and really liked the descriptions of Sorrento. I’ve been there, it felt very true to my memory. So, I think this is a serious case of ‘you’re mileage may vary.’ Give it a try instead of just taking my word for it. 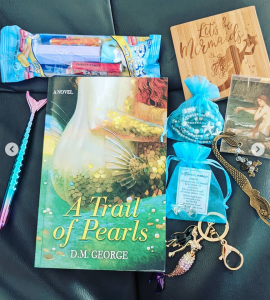 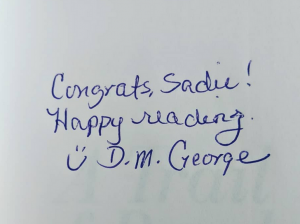 Review: A Trail of Pearls (ARC)

A Trail of Pearls

I borrowed an audio copy of Mira Grant‘s Into the Drowning Deep through Hoopla.

The ocean is home to many myths,
But some are deadly…

Seven years ago the Atargatis set off on a voyage to the Mariana Trench to film a mockumentary bringing to life ancient sea creatures of legend. It was lost at sea with all hands. Some have called it a hoax; others have called it a tragedy.

Now a new crew has been assembled. But this time they’re not out to entertain. Some seek to validate their life’s work. Some seek the greatest hunt of all. Some seek the truth. But for the ambitious young scientist Victoria Stewart this is a voyage to uncover the fate of the sister she lost.

Whatever the truth may be, it will only be found below the waves.

But the secrets of the deep come with a price.

These are mermaids of the old stories, the mermaids of nightmares, the mermaids closer to sirens that Ariel. And I loved them. Or well, not them, but the story around them. Yes, as others have commented, the book is on the slow side. Keeping the suspense high at the expense of pace. But I appreciated that. I also appreciated the love in various forms (familial, platonic, queer, straight, and strained). I liked that an autistic character got to be a hero and that somehow Mira Grant made me feel sorry for an endangered species hunting psychopath (that couldn’t have been easy). All in all, I really quite enjoyed this.