Moon Scorned, by Marty Mayberry was featured over and Sadie’s Spotlight and I was so taken with the cover that I picked it up for review from R&R Tours.

I fell hard and fast for the alpha of an elite pack.

Then he rejected me.

Asher took off when I needed him most, rejecting me and my inner wolf. Then my half-sister is murdered at an exclusive college that’s enshrouded in magic and secrets. When the school offers me a scholarship, I accept and move onto campus. I’m going to find out who killed her, then rip them apart. And if I run into Asher while I’m there? He’ll learn I’m no longer his sweet little thing. He’s about to taste the fury of a wolf shifter scorned.

Everly’s everything to me, but to protect her, I had to shove her away. If I go near her, the Drudge Pack will discover who she truly is. My father—their enforcer—will kill her. But when she shows up at Ravenmire College, my inner wolf hungers. I’ll do anything to keep her safe—even if that means sacrificing myself and betraying my dangerous family.

I think that this book will appeal to a lot of readers. It’s not a bad book at all. Everly is admirably willing to stand up for herself and shrug off mean-girl BS. Asher is sweet in his desperate desire to do the right thing, even as it hurts and he’s scorned for it. There’s an interesting world here and the writing is quite readable.

However, the book also starts out feeling as if there must be a previous book and then ends on a cliffhanger with absolutely nothing concluded. Here’s my feeling on cliffies. It’s one thing to wrap-up part of a story and leave some threads open for continuation of a story. The reader finishs the book with at least some sense of completion. It’s another to publish part of a story, ending it with nothing concluded. Those are not the same thing. I have no interest in further committing myself to series that do the latter, because I just assume the next book and then the next book and the next will end the same and I have no faith in ever actually getting an ending.

However, none of this is uncommon and I doubt everyone is as annoyed by this as I am (since it’s become a pet peeve of mine). If this doesn’t bother you and you’re looking for a familiar feeling academy(ish) YA/NA paranormal read this one is probably worth your time to pick up. 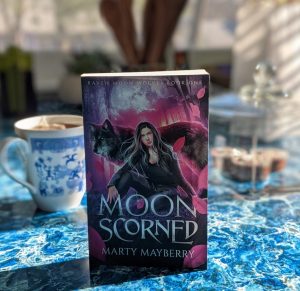 Win a copy of the prequel novella, Moon Hunted.

I purchased a monthly Supernatural Book Crate subscription and The Cursed Crown (by May Sage and Alexi Blake) was included. 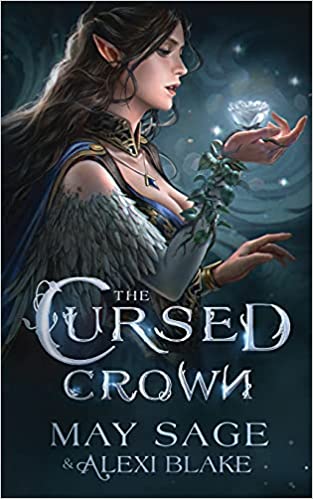 No one was ever born less suited to ruling than Rissa, the thorn of the seelie realm-a half-fae so wild she’s spent the better part of a hundred years in the woods.

For all her flaws, she’s the last of the high court bloodline, and the southern king seems to think that’s reason enough to slap a crown on her feathered head. He needs her to unify the seelie forces. She needs him to forget about that nonsense.

In an effort to aid her people without condemning herself to a lifetime of misery, she sets off on a journey to find the one person with a stronger claim to the throne than hers: the cursed prince.

Sealed in the mountains of the Wilderness, under many spells, the heir of the first seelie queen is the only royal strong enough to protect the fae lands from their immortal invaders.

Surviving the untamed tribes and awakening a thousand-year-old prince seem a lot easier than ruling an entire kingdom where everyone hates her very nature.

And her choices won’t come without consequences.

I generally enjoyed this. I liked that Rissa stood up for herself, even when intimidated or overwhelmed. I liked that Rydekar let her make her own decisions, even when he disagreed with them. (By ‘let’ I mean he didn’t try to stand in her way, not that he gave her permission. She neither needed nor sought it.) I liked the world and that the romance is fairly slow burn considering the whole fated mates angle.

Like so, so, so many such books Rissa is strong and capable. She’s the heroine of this book and it’s implied she and Rydekar end on equal footing. But up until that point, she’s the younger, less informed, less capable of the two and wouldn’t have achieved her greatness without his intercession. There always seems to be a point when the female character says or does something she later apologizes for, in such books, and there’s almost always a point when she realized the male character was right all along. The author(s) may make him more or less smug about it, depending on how much of an alpha a-hole they are or aren’t writing. But this plotting is so, so, so common. And it grates a little that this is the story we women tell ourselves so often. And The Cursed Crown is as guilty of this as any other. I’m noting it because it’s on my mind, not so much because it’s something to denigrate the book for. It is super common after all, even if I wish it wasn’t. *shrug*

I did think the pre-epilogue ending was a bit anticlimactic and the epilogue felt tacked on and unnecessary. All in all, however, I’d be happy to return for more of Sage & Blake’s books.

BOOK REVIEW: The Cursed Crown (The Darker Woods) by May Sage as Alexi Blake #EpicFantasy

I borrowed a copy of Sara Snow‘s Luna Rising through Amazon’s Prime Reading. I’ve been avoiding new adult and young adult books lately. So, I’m not entirely sure why I borrowed this. But I assume I had a reason at the time. *shrug* 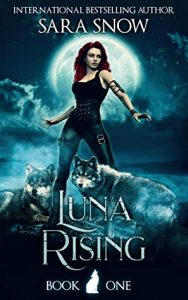 Xavier Blackwood is the man every girl at my college dreams about at night, myself included, but I’d never let anyone know that.

Standing at 6’8 with steel grey eyes, he’s a walking dream, but he’s also a world-renowned jerk.

Who would have thought that one night, after dragging myself home after doing double shifts at the diner, I’d be jumped by three men…only to have Xavier come to my rescue.

Oh yes, Xavier bloody Blackwood saved my life…but the thing I saw, the CREATURE that ripped those men to shreds wasn’t the Xavier everyone knows.

He was a wolf, a demon, a creature from myths, and it was the most amazing thing I’ve ever seen until he attacked me too and knocked me out.

Humans that learn about the existence of werewolves have to die.

…There are NO exceptions.

The Werewolf Xavier saved me, but now I am condemned to death

To make things worse, both Xavier and Axel claim I am their mate

…this can’t be good.

You know, when it comes to Fated Mates shifter books we’ve read it all before. There is nothing new under the sun. But seeing the combination of circumstances (even familiar ones) the author puts the mates in and getting to know them is what makes the trope fun to read. And this is where Snow fails with Luna Rising. We don’t get any of that. There is almost no world-building. We’re given very little meat plot-wise. We only get to know Ruby a little bit (and only because so much of the book is her navel gazing…or waking up, she sleeps A LOT), Xavier almost none, and Axel absolutely none at all. And then the book ends before anything really begins. This almost feels more like and extended outline than an actual fleshed out book. There isn’t even enough her to feel connected to anything or anyone. The writing is pedestrian but fine. I don’t think I’ll bother with the rest of the series though. But if anyone wants a taste of the series, there is apparently a prequel available here.