Somewhere along the way I picked up a freebie code for an Audible copy of The Demon of Mansfeld Manor, by S. A. Jacobs. 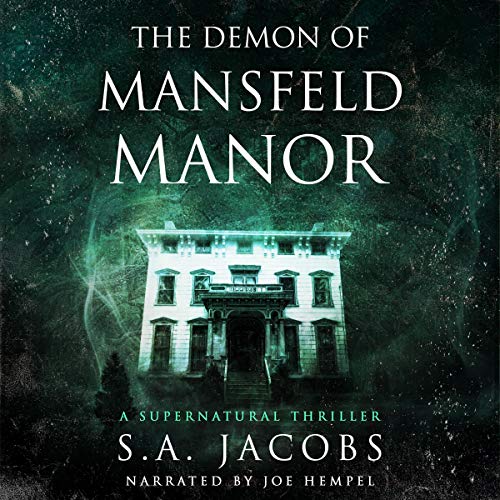 An unexpected inheritance. A stately manor. A place of evil.

Jim Bauer is shocked when he inherits a large sum of money and a historic mansion. The mysterious gift comes with a stipulation, however; he must use the funds to restore Mansfeld Manor to its original condition.

What Jim doesn’t know is that this home has a terrible history. As he works to restore the manor, he begins to learn the terrifying secrets of its past. He discovers tales of missing persons, rumors of occult rituals, and sightings of a ghostly wolf on the grounds.

And now the evil has begun once again.

Even with the help of a paranormal investigator and a woman with ties to the manor’s history, Jim is left to answer the biggest questions of all: Why was he chosen to inherit the manor? And what does the evil want from him?

I thought this was a fine supernatural or paranormal mystery, though not excellent. It held my attention and the characters were likeable enough. But I never felt particularly attached to them. I never truly felt the threat the demon at the manor posed. The villain is evil for boring, unoriginal reasons. There seemed to be an unexplained shift in Jim’s attitude toward the investigator toward the end. The twist wasn’t particularly shocking, etc. But the writing is pretty clean and the narrator did a good job with it. So, I’m calling it fine, even if it’s not topping any favorites list for me.

I received an Audible code for a copy fo Laura Greenwood‘s Spell Caster.

Can magic and science come together to catch a murderer?

Cassie’s world is turned upside down when she’s given an unusual blood sample to test. And when a mysterious man shows up at her lab telling her he has the answers she’s looking for, she’s pulled into a world of murder, investigations, and intrigue.

Finally able to explore the connection between her powers as a witch and her expertise as a scientist to uncover why paranormals keep turning up dead.
–
Spell Caster is a reverse harem paranormal mystery set in the Paranormal Council Universe.

But most importantly, how this four-way mating might work isn’t addressed at all. It’s clarified that each man is her mate and they aren’t each others mates (no menage). But I have a hard time believing that will work with no jealousy. Why would these guys share a mate?

The book would have simply been IMMENSELY improved if the author had left the mate element out and let the book be about Cassie getting a new job and earning her spot on the Paranormal Crimes Investigation team. And I honestly think the author would only have had to cut about 2% of the text to make this true. I cannot emphasize enough how underdeveloped the mate aspect is. It’s so underdeveloped that it’s just a distraction and detraction in the plot. I think I’d have really liked the book if it was just a paranormal mystery. As it is, I was just disappointed.

Edit: On a side note, the title is Spell Caster, but Cassie doesn’t cast a single spell in the book. She uses magic, but never an actual spell. Just saying.