Carla Rehse‘s The Accidental Gatekeeper was promoed on Sadie’s Spotlight. While I didn’t agree to review it as part of the tour, I did receive a free copy for participating. And since Paranormal Women’s Fiction is a genre I’m loving right now, I gave it a read. 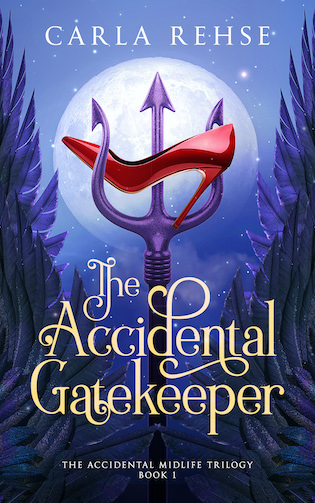 Turning the big four-five isn’t a problem for Everly Popa—it’s everything else in her life that’s gone to hell in a handbasket.

It’s bad enough that Everly’s drug-selling husband is in jail and her adult daughter blames her for the situation. But now the FBI wants her to turn witness, while her husband’s criminal friends want to keep her permanently silent. With no other safe haven, Everly returns to her hometown. A place she hasn’t visited in twenty-seven years. And didn’t leave under the best of circumstances.

It’s not that Everly has a problem with her hometown, exactly, but since it sits next to Hell’s Gate, there’s bound to be a few issues. Like the archaic rules set by the angels who run the town. Or the fact that the townsfolk feel Everly abandoned her duties as one of the members of the town’s founding families. But between celestial politics or getting gunned down by a drug cartel, Everly decides to chance finding sanctuary back home.

After a little good-versus-evil stunt at the town’s border, Everly is let back in and for the first five minutes, things are great. However, soon all hell breaks loose!

Before Everly can take a deep breath and figure a way out of the mess she’s gotten into, an angel gets killed, humans go missing and the town shuts its magical borders. Now Everly is trapped inside with dying angels, rampaging demons, and a witch with a murderous agenda. The only way out is for Everly to learn how to use her newly acquired Gatekeeper powers. But with no handbook provided, there’s a snowball’s chance in hell she’ll figure it out in time.

I feel pretty middle-of-the-road about this book. I didn’t actually dislike it, but I also didn’t finish if feeling bereft for having come to the end. I appreciate that Everly is a 45yo heroine and that she’s trying to do her best in a difficult situation (having not done so in the past). But I also feel like the book is go, go, go from start to finish, which gives the reader no time to rest or to get to know any of the character. I finished the book having developed no attachment to anyone, not feeling what might have been a romantic sub-thread (I’m not even sure), or not particularly invested in the mystery.

The writing is perfectly readable and the editing seemed pretty clean. I personally hate the pretend cursing. Either let a character curse or keep it clean, but don’t half-ass it with, “How, at forty-five f-bomb years old….?” But that’s a personal preference. I also thought that the “I gotta protect my daughter” was over played. What I love about so many PWF books is that they show women over 40 as having selves outside of their husband and family. I thought Rehse’s focus on Everly’s motivation being her daughter dimmed this aspect of the genre significantly. Of course she wants to protect her daughter, but what else is there of interest about her?

I think others who enjoy PWF will like this book. As I said, I didn’t dislike it. It’s just not the best I’ve read. 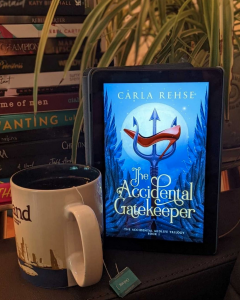 I initially picked up a copy of Renee George‘s Sense and Scent Ability as an Amazon freebie. But then I ended up borrowing an audio copy of it from Hoopla instead, so that I could listen to it as I did chores. 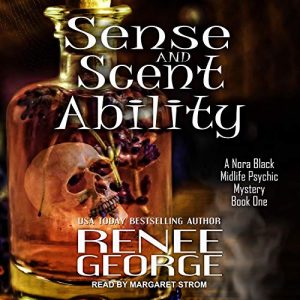 My name is Nora Black, and I’m fifty-one-years young. At least that’s what I tell myself, when I’m not having hot flashes, my knees don’t hurt, and I can find my reading glasses.

I’m also the proud owner of a salon called Scents & Scentsability in the small resort town of Garden Cove, where I make a cozy living selling handmade bath and beauty products. All in all, my life is pretty good.

Except for one little glitch…

Since my recent hysterectomy, where I died on the operating table, I’ve been experiencing what some might call paranormal activity. No, I don’t see dead people, but quite suddenly I’m triggered by scents that, in their wake, leave behind these vividly intense memories. Sometimes they’re unfocused and hazy, but there’s no doubt, they are very, very real.
Know what else? They’re not my memories. It seems I’ve lost a uterus and gained a psychic gift.

When my best friend’s abusive boyfriend ends up dead after a fire, and she becomes the prime suspect, I end up a babysitter to her two teenagers while she’s locked up in the clink. Add to that the handsome detective determined to stand in my way, my super sniffer’s newly acquired abilities and a rash of memories connected to the real criminal, and I find myself in a race to catch a killer before my best friend is tried for murder.

I thought this was a fine, middle of the road story and the narrator did a fine (if inconsistent) job with the audio. I liked Nora. I liked the decisions to let her be a 50+ year old woman who decided not to have children and that not be a point of contention in the novel. I liked the younger potential romantic partner. I liked the female friendships and that there isn’t any jealous among them.

I did think Nora (who’s 51) feels too infirm for the age. Sure, as the body gets older, there’s the occasional ache or pain. But she sounds like she’s far older, if her failing body is anything to go by. Sometimes I feel like aches, pains, and a leaky bladder are the only things authors can think of to signal a middle-aged or above woman. And as Nora hasn’t had children the bladder is off the table as an option. So, I guess George had no other option than to focus on her achy knees…or something.

All in all, the book did the job of keeping me distracted and I’d read another one. 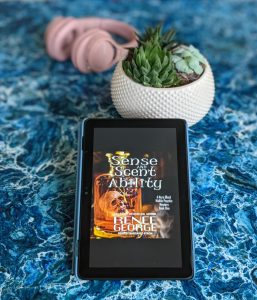 I borrowed a copy of Elizabeth Hunter‘s Suddenly Psychic through Amazon Prime. 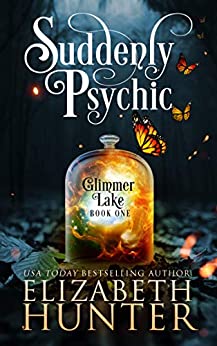 Every woman goes through changes in their forties.
Just not… these changes.

Robin Brannon was a normal wife, mom, and antique shop owner until a brush with death turned her day-to-day life upside down. Now she and her two best friends are seeing things that belong in a fantasy novel. Ghosts. Visions. Omens of doom. Nothing that belongs in the peaceful mountain town they call home.

Added to that, Robin’s marriage is on the rocks, her grandmother’s health is failing, her mother is driving away the customers at her shop, her teenage daughter refuses to get her drivers’ license, and her left knee aches every darn morning.

Robin doesn’t have the time, energy, or knees to unearth the secrets buried at the bottom of Glimmer Lake, but fate doesn’t seem to care. Some secrets are just dying to be exposed.

Paranormal Women’s Fiction has become one of my favorite genres. But I fully admit that, of those I’ve read, some authors are more successful writing 40+ year old heroines than others. A lot of them feel 20 but the reader is told they’re 40 and that’s about that. But Hunter hit a home run here.

I related to so much of Robin’s character. She wasn’t overly cutesy in some warped attempt to be relevant. Her age-related struggles felt real, not just painted on or cliched. Aching knees or twitchy bladder alone does not a middle aged women make. Robin and her best friends feel like real women in their mid-40s. And I cannot tell you how much I appreciate that.

Similarly, her romantic struggles were a departure from the norm. I swear something like 85% of PWF books start with a divorce. (I made that number up, but it’s a lot.) That Robin is trying to save the marriage that is wounded but so clearly not dead was a breath of fresh air. Her husband was marvelous, but not a Gary Stu.

I also liked that the women’s sudden exposure to the psychic wasn’t over the top and was, therefore, a lot easier to swallow. I did think they discovered, discussed and accepted the situation a little too easily. But a story does need to move along. Lastly, with all the parents, siblings, spouses, ex-spouses, children and towns people, I did lose track of who was who on occasion.

Despite those few complaints I’m hoping to get my hands on book 2 and continue the series. 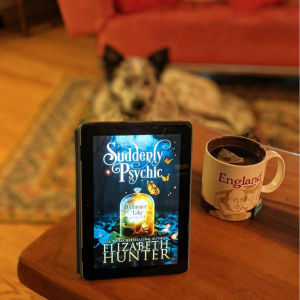