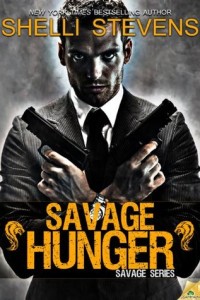 I grabbed a copy of Shelli Stevens‘ novel, Savage Hunger from the Amazon free list. At the time of posting, it was still free.

Description from Goodreads:
Being the daughter of a world-renowned scientist, Sienna Peters has struggled to carve out her own career in the field. But her world is sent spinning when she discovers a secret species being held in the lab where she works, and the horrible things being done to them. Compelled to do more than hand off an information-packed jump drive to her father, she sets out to free the creatures.The minute his team enters the compound, federal agent Warrick Donovan knows their mission will have more trouble than they bargained on. Unfortunately, trouble comes in the form of Sienna Peters, the younger sister of his close friend. Now not only does he need to save her pretty ass, he needs to discover just how involved she is with the imprisonment of the shifters.Sienna knows she should trust no one–not even the man she might still love. But as the danger escalates and past passion ignites, her heart has other ideas. Even when the shroud of mystery is ripped off more than one stunning truth…The man who vows to protect her may be her biggest threat.

Review:
This book has a cool cover (that really doesn’t represent the book at all), but that’s about it. I suppose a lot of it comes down to personal preferences in the books we read, but this one made me grind my teeth. Everything from odd uses male and feminine as descriptors. For example: “…but instead a surge of confidence at the feminine awareness in her eyes.” What the hell is “feminine awareness?” Or when the characters say, “I love the way you feel,” she murmured. “So hard. So…male.” Which was why they worked well together. Why, because he’s a man and she’s a woman? Is that really all it takes to fit together? Remind me to grab the next man that passes me on the street, then. To the fact that as soon as they had sexy-time for the first time Warrick was all of a sudden “baby” this and “baby” that was annoying. But mostly I didn’t like the fact that I was bored silly for most of the book. Seriously, it was a fairly consistent pattern of 5-6 pages (or some similarly long time) of angsty, “I want him/her, but can’t have her/him bla, bla, bla,” a paragraph or two of plot related action, another series of pages about how sexy Sierra is or Warrick is or how they wished they could be together or not. All multiplied by about a million. Plus, there’s just no joy here. Every-time the characters engage in anything that should be a moment of bliss–sex or cuddles or basic kindness–it is immediately followed a fight, anger and mooooore angst (mostly because Warrick is a total jerk). This left no light moments. Also the plot is really pretty week in general. I mean Sierra is hunted by the organisation for having a jump drive that proves their nefarious deeds (and “jump drive” is used about a 1,000 times, BTW). Sure, OK. But then it turns out the whole thing is legal–contracts are signed, etc. So, why hunter her down at all? What’s more, the big-bad-guy is just some random person who plays no real role in the book, you never get to know and whose motives are never disclosed. Meh. Plus, everyone acts like Sierra is soooo stubborn to not give up the information she has. But a highly trained, hardened para-military group pretty much just politely asked her to tell them and then backed off when she said, “no.” What? Really? So unbelievable. Lastly, and just as important as the boredom is the basic predictability of it all. At 50% through, I posted a status update that said, “So, we all know how this is going to wrap up and end, right? Right.” And I did. Everything worked out just the way I expected it to. For those readers who love a story that is almost entirely based on two people working their angsty out, drooling over one another and moving toward sex this is a good book for you. For those who need a little more plot or who have a low BS tolerance, maybe not. The mechanical writing and editing was all fine, one way or the other though.