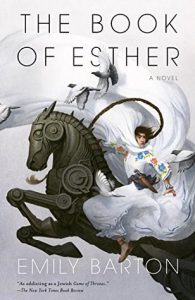 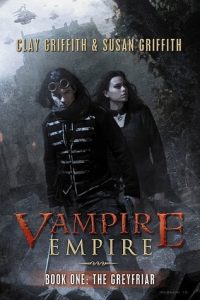 I borrowed a copy of Clay and Susan Griffith‘s The Greyfriar from my local library.

Description from Goodreads:
In the year 1870, a horrible plague of vampires swept over the northern regions of the world. It is now 2020 and a bloody reckoning is coming. Princess Adele is heir to the Empire of Equatoria, a remnant of the old tropical British Empire. When she becomes the target of a merciless vampire clan, her only protector is the Greyfriar, a mysterious hero who fights the vampires from deep within their territory. Their dangerous relationship plays out against an approaching war to the death between humankind and the vampire clans.

The first book in a trilogy of high adventure and alternate history. Combining rousing pulp action with steampunk style, the Vampire Empire series brings epic political themes to life within a story of heartbreaking romance, sacrifice, and heroism.

Review:
I’m going to call this an OK read. I didn’t love it, but I didn’t dislike it either. I liked that Adele was self assured and self-confident, but also willing to accept help. Plus, she never threw a strop and ran of to do anything TSTL. I can appreciate that. And I admit, I thought Gareth was just adorable. I liked the writing and it’s well edited. But I had one major personal niggle.

The whole premise of the plot hinges on a subtle supremacy of the human race. Gareth not only appreciated humanity in a way no other vampire does, he actively want to be human and is willing to risk his whole race for the desire. I’ll grant that the vampire culture seems to be in some decline in this book. But I am never comfortable with books that present two competing cultures and make one more morally desirable than the other. Especially when this is done subtly, such that the reader is gently nudged to see one race as superior to the other.

See, I’m uncomfortable with it in the same way I am uncomfortable with that last sentence when used just for humans, when one race is presented as superior to another. Nope, I’m out. I realize this isn’t necessarily something that was intended and it’s totally superimposing reality on fiction, but it’s something I’m almost always sketchy about. 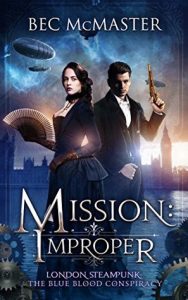 I snagged a copy of Bec McMaster‘s Mission: Improper from Amazon.

Description from Goodreads:
Three years ago, London society changed forever, with a revolution placing the widowed Queen firmly on the throne her blue blood husband tried to take from her. Humans, verwulfen and mechs are no longer considered the lesser classes, but not everybody is happy with the new order…

Entire families have gone missing in the East End. When Caleb Byrnes receives an invitation to join the Company of Rogues as an undercover agent pledged to protect the crown, he jumps at the chance to find out who, or what, is behind the disappearances. Hunting criminals is what the darkly driven blue blood does best, and though he prefers to work alone, the opportunity is too good to resist.

The problem? He’s partnered with Ingrid Miller, the fiery and passionate verwulfen woman who won a private bet against him a year ago. Byrnes has a score to settle, but one stolen kiss and suddenly the killer is not the only thing Byrnes is interested in hunting.

Soon they’re chasing whispered rumours of a secret project gone wrong, and a monster that just might be more dangerous than either of them combined. The only way to find out more is to go undercover among the blue blood elite… But when their hunt uncovers a mysterious conspiracy, Byrnes and Ingrid must set aside their age-old rivalry if they have any chance at surviving a treacherous plot.

Review:
This was ok, not great for me, but not too bad either. It’s the sort of book that tempts me, but generally disappoints me in the end. It presents a strong-willed, self-reliant woman, one that even takes charge in the bedroom. But then always somehow turns the plotting just so, leaving her waiting passively to be claimed by the man. So close to something I love, just to turn into something that annoys me.

But I still might have enjoyed this a lot, McMaster’s can write well, except for a SERIOUS PET PEEVE. Some authors and/or publishers have this infuriating habit of looking at a running series and, I don’t know, deciding not enough people will but a sixth book in a series. So, they go, “Hey, let’s just make it a spinoff series and then we can call it book 1 and people who haven’t read the previous 5 books will still buy it.” Yay, sounds great. NO.

You see, Mission: Improper is labeled book 1. But it is book 6. Sure, I could follow the plot. But I could definitely feel I was missing a lot. All the characters knew one another. They had and discussed history that I’m fairly sure was the plot of past books in the London Steampunk series. I never felt I got to know the main characters, because they had already met before the start of this book. It’s a continuation of something. While technically this book stands on its own, you feel the lack of past books A LOT. And that’s seriously annoying when you are reading a ‘BOOK 1.’