I borrowed an audio version of Melinda Chase‘s Forty, Fabulous and…Fae? through Hoopla. 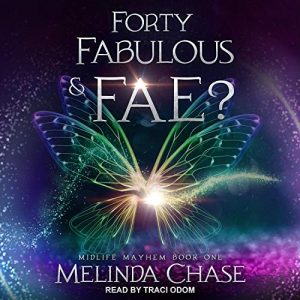 No one expects their happily-ever-after to end at forty—but here I am one Prince Charming short of a fairytale.

Living back at Mom’s place with her and Gram is not how this ex district attorney intended to start the next chapter of her life, but I shouldn’t be surprised it’s where I ended up.

You see, my family is cursed. Literally.

At least that’s what both Gram and Mom claim. I’ve never given much thought to their ridiculous superstitions, but when three local patrons from my mom’s occult shop end up dead, even I’m a bit unnerved.

So, I decide to dive right into the crazy headfirst. And what I thought would be the end of my journey…may only be the beginning.

Meh, this wasn’t bad, but it wasn’t fabulous either. I think it just needed another 100 pages—taking it from a novella to a novel—to carry it off. As it is, everything feels a little sketched out, none of the characters feel particularly well-fleshed, and the plot barely starts before the book ends on a cliffhanger.

I liked Shanna well enough, but she’s the only character you get to know, and barely even her. And notably, since this is supposed to be PWF, nothing about her or her situation feels 40+ years old. She could have been 25 and the book would have felt exactly the same. Her being a DA is literally extraneous to the plot. What’s more, I think given the lack of age-defining characteristics, mid-twenties would have fit the plot better. (I always wonder in such scenarios if the author just aged the character up to catch the PWF wave, but of course I don’t actually know.) Everyone else is either just a name or a card-board cutout not worth mentioning.

The writing is quite readable, though, the narrative has an appreciable tone, and the audiobook narrator did a good job. But I’m still pretty meh on the whole thing. I don’t think I’d bother with the next book. I’m just not invested enough to really care what happens. 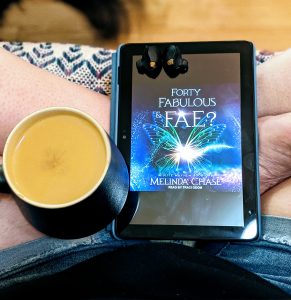 I borrowed an audio copy of Megan Lindholm‘s Wizard of the Pigeons through Hoopla. 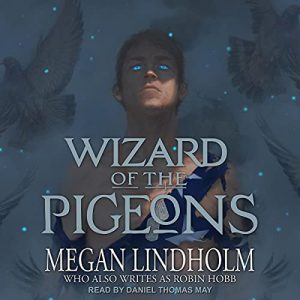 Seattle: a place as magical as the Emerald City.

Seattle: a place as magical as the Emerald City. Subtle magic seeps through the cracks in the paving stones of the sprawling metropolis. But only the inhabitants who possess special gifts are open to the city’s consciousness; finding portents in the graffiti, reading messages in the rubbish or listening to warnings in the skipping-rope chants of children. Wizard is bound to Seattle and her magic. His gift is the Knowing — a powerful enchantment allowing him to know the truth of things; to hear the life-stories of ancient mummies locked behind glass cabinets, to receive true fortunes from the carnival machines, to reveal to ordinary people the answers to their troubles and to safeguard the city’s equilibrium. The magic has its price; Wizard must never have more than a dollar in his pocket, must remain celibate, and he must feed and protect the pigeons. But a threat to Seattle has begun to emerge in the portents. A malevolent force born of Wizard’s forgotten past has returned to prey upon his power and taunt him with images of his obscure history; and he is the only wizard in Seattle who can face the evil and save the city, his friends and himself.

I picked Wizard of the Pigeons up through Hoopla, from the ‘newly added’ shelf. So, I assumed it was a new book. However, about halfway through I stopped by Goodreads to drop a quick status update and learned two things. One, i didn’t have a new book, but a new edition of an older book—the 35th anniversary edition, as fate would have it. And two, Megan Lindholm is the same author who writes as Robin Hobb. Neither of these things changed anything about the book, but I did look at it a little differently.

I’d call this book more interesting than enjoyable. But the way Lindholm leaves the reader to decide where the lines lay between reality, Wizard’s wizardry, and his history as a Vietnam veteran and the resulting trauma is intriguing. So is characters supposition about what causes them each to become wizards. The book really is a wonderful tribute to veterans and their struggles. It focuses on Vietnam vets, probably due to when it was written, but would work just as well for returning soldiers of more recent conflicts. Though one might quibble about whether the ending is the happiest outcome or not.  I can see people having differing opinions on the question.

I liked Wizard and the rest…except Linda (who you’re not supposed to like). The writing is good and the audio version is a pleasure to listen to. The book is slow at times, but I don’t think I minded that too much. All in all, a success for me. 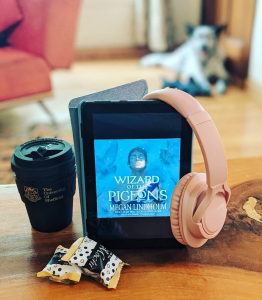 Wizard of the Pigeons: A novel with many layers

I borrowed audio versions of New Witch on the Block and Jealousy’s a Witch (Midlife in Mosswood #1 & 2), by Louisa West through Hoopla. 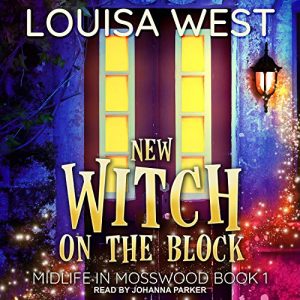 She thought she was running away from her past, not catching up with it.

Rosemary Bell just wants to live a quiet, happy life and raise her daughter as far away from her toxic ex-husband as she can get. But when they move into a decrepit cottage in the woods of Mosswood, Georgia, Rosie realises her life will never be simple.

A gang of meddling neighborhood do-gooders want to run her out of town. The vicious laundromat machines keep eating her spare change. Not to mention her buff Irish stalker who insists that he’s a Witch King and that it’s her royal destiny to be his Queen.

And to top it all off, strange things keep happening around Rosie when she least expects it…

She could deal with it all, but her ex won’t rest until he tracks her down. When her ability to protect her daughter is threatened, Rosie shows them all that nobody messes with the new witch on the block.

I generally liked this. I appreciated a heroine who had made mistakes because of youth and inexperience, but had grown and gotten herself out of a difficult situation. I like that the love interest is sexy to her, but isn’t described as uber handsome.

The plot is fairly simple and it takes a while for the magic to be introduced, but it’s enjoyable. I did think being the ‘Witch Queen’ as opposed to just a witch, even a powerful witch, was too much. It felt like the author just had to make her that extra little bit special.

The writing is perfectly readable and, as far as I could tell in audio (it is well narrated) the editing is clean. However, the book ends very abruptly with nothing concluded or wrapped up. 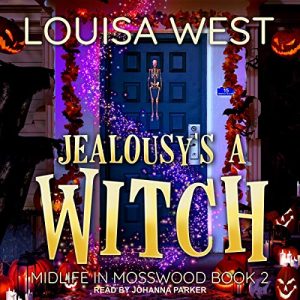 She thought that her life couldn’t get any stranger. Boy, was she wrong.

Rosemary Bell’s ex-husband is now a turtle, she’s suddenly witch royalty, her daughter Maggie’s new best friend is an imaginary kangaroo hopping around the forests of Mosswood, Georgia, and her Witch King, Declan, isn’t making her life or her couch’s throw pillows any cushier.

Just as she’s starting to fall for Declan, a shocking confession leaves her reeling and Rosie wonders whether she is really meant to be the queen of anything. When a sexy bombshell arrives in town with her eyes set on Rosie’s King and crown, she will have to decide for herself what her destiny is – and soon.

Struggling between caring for Declan and caring for herself and Maggie, Rosie does her best to rise above the woman’s provocation. But when Maggie is kidnapped on All Hallow’s Eve, Rosie has no choice but to trust Declan and work together to get her daughter back. After an intense magical ritual brings her new powers full circle, Rosie finds out that jealousy’s a witch – literally!

I still liked Rosie here in Jealousy’s a Witch, and I liked the addition of Maggie as a character. But I didn’t like this plot as much as the previous book. I think the jealous ex girlfriend/wife/etc as the villain is super over-used and cliched.

All in all, I’m enjoying the series and will likely continue it at some point. But I think I’ve had enough for the moment. 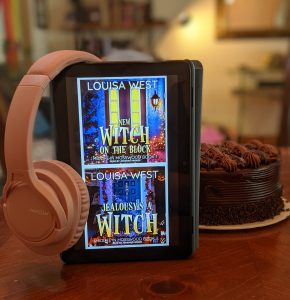