You guys, I promised myself that this year I wouldn’t find myself in mid-December scrambling to find the last few books for my yearly Author Alphabet Challenge. I was gonna have read a book by an author for every letter of the alphabet early this year. And I was on target to do it too. I had read everything except X and maybe U by about August. But man that X-author just kept right out of reach and here it is December 16th and I’ve just now made a desperate grab for an X-authored book, just like every year. Thus I read Eternal: Micah’s Mate, by Tianna Xander. I’m happy to be able to say it completes my challenge, but disappointed that I let it get this far into the year again. Maybe next year will be the year I get it complete early. 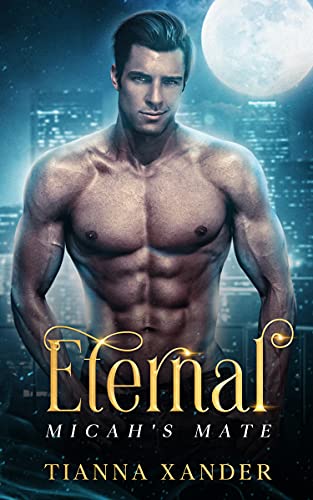 It feels like the whole world is against her – but that doesn’t mean there’s no time for love.

I was sure I’d end up alone forever. But as soon as I bumped into six-foot-six of tall, dark, and handsome male vampire perfection, my plans were thrown on their head. Being wanted for murder sucks – but after meeting Micah, things suddenly don’t seem so bad after all…

Micah swore to protect my father’s interests… even if that means babysitting his sassy and snarky daughter. He knows I have an attitude – but he’s still drawn to me. And between his skills and my interdimensional magic, we might just be able to make it out of this in one piece…

This simply isn’t very good. The mechanical writing and editing seems fine, but the plotting and story are a mess. In fact, I’d go so far as to say that this isn’t a story. It’s a series of random events connected only in that the main character is there for all of them. There is no story to become invested in because there is no story to follow. It’s just what random thing will happen next with no foreshadowing, buildup, or explanation before falling instantly into irrelevance. New characters are being introduced all the way until the end, which means the reader has no connection of care for them. Nothing has any emotional impact, because nothing is given any time to develop. There is very little world-building and a ton of inconsistencies even in what there is. Honestly, if I hadn’t needed an X-author for my yearly Author Alphabet Challenge I’d have DNFed this pretty early on.

I received a signed paperback copy of Kayleigh King’s Bloody Kingdom in a Supernatural Book Crate book box I purchased. I think it was maybe the August one. This isn’t a fairytale.
I dethroned Prince Charming long ago.
They call me the King of darkness and death.
Ruler of the underworld.
My reign is ruthless, my word is the law.
If I want it, I take it, regardless of the bloodshed.
But then she walks into my life.
I don’t want her, I need her.
She can fight, she can beg, but her fate is sealed.
Until her debt is paid, she’s mine.
She ran from her old life, but she can’t outrun me.

This is a fine Beauty and the Beast retelling. Though I don’t know why authors insist on trying to tie every damned story into a retelling. Why can’t a story just be a story? I digress. This is a fine Beauty and the Beast retelling. But it does not live up to the blurb at all. I expected this to be dark vampire romance, maybe even erotica. Instead it really isn’t particularly dark and there isn’t even a sex scene until around page 225. It’s a fine sex scene, but it’s not especially impressive or dark. And there’s not even very much sexual tension up until that point. So, that blurb makes promises the book does not deliver on. Hell, the story isn’t even particularly bloody. So, even the title is misleading in that regard.

Having said all of that, once I let go of the expectations the title and blurb set up, I enjoyed it well enough. It was entertaining. The love was basically insta-lust that morphs mysteriously into insta-love and the whole thing ended on a cliffhanger. So, admittedly, it’s not super satisfying. But I did enjoy the time I spent reading it. I’d be winning to read book two, if I could get it at the library or as a freebie. But I don’t think I’d be willing to pay for it. (That’s kind of my go-to system of deciding how much I like or dislike a series; would I pay for more of it?) 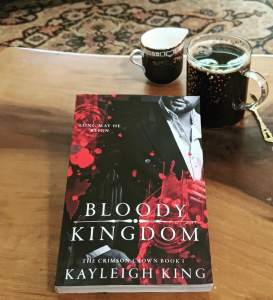 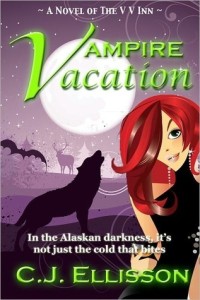 Description from Goodreads:
Meet Vivian. She’s a 580-year-old vampire who exudes sex, has a talent for drama, and is passionate about two things: her human husband, Rafe, and their resort for the undead. Her ability to project physical illusions has created the perfect vacation spot-a dark, isolated Alaskan hideaway where visitors can have their wildest fantasies come true.

Vivian knows the best performance requires perfect timing, but the powerful vamp is put to the test when she discovers a corpse in a locked guestroom minutes before the next arrivals. Always cool-headed, Rafe hides the body, convinced he and Vivian can find the culprit without disturbing their guests. Juggling the increasingly outrageous demands of their customers while tracking a killer isn’t easy.

Will their poking and prodding give them the answers they need, or will it uncover secrets Vivian would kill to protect?

Review:
I moved this up my TBR after coming across a one-star Amazon review that was getting slammed with negative votes and derisive comments (198 at last count). I wanted to see what all the hubbub was about. (This, BTW, is a perfect example of a bad review gaining a book a reader. Just goes to show, bad reviews aren’t always bad for a book.)

My opinion? I wouldn’t call it one star worthy, but it’s not any great piece of literature either. Granted, it’s paranormal erotica, so who would expect great literature? But even for the genre it’s just fluff. Now, I enjoy a little fluff now and again. I do. So I’m not disparaging the book for this. But I will have to admit that it’s a pretty weak offering.

That’s generally how the book felt. It was so cluttered with unnecessary and unrealistic sex (apparently no-one needs or expects foreplay, there isn’t any to be found) that the plot is forced to the side. I could almost see the poor thing trying to push itself to the surface on occasion, like a drowning victim in high seas. It would manage to peak out for a moment, only to be overcome by some ridiculous sexual foray, usually between Viv and Rafe but occasionally between a secondary character and Viv’s imagination. It was just a constant barrage on one sex-related activity, fantasy, comment, imagining, etc after another. The VV Inn felt very much like a bordello or a sex-retreat (do these have names?), but all of the guests felt too innocent to be there.

Then there is Viv, herself. I’m putting her in the too stupid to live category. She’s presented as if she’s unusually clever and strong, but she creates one ridiculous situation after another. Each time there is an excuse—I was so distracted by the blood I couldn’t think straight or I was so hopped up on werewolf blood I was distracted, etc—but after a while the excuses start to feel like just that, an excuse to cover her obvious lack of intelligence.

Though it was a bit heavy handed (we’re told about a million times how much they love/desire one another), I did appreciate the obvious affection between Viv and Rafe. It was nice to see a solid, loyal married couple with no desire to give in to the temptation to wander.

The writing itself was simplistic but fine, though names did crop up a bit too often to read smoothly. It’s in first person, present tense (which I HATE, hate, hate) but it’s not too badly edited and there aren’t too many cringe-worthy passages. All in all, it’s a little on the cheesed up side, Vivian being too focused on her own sexual prowess (teaching the guest SMBD, for example) to feel serious about much of anything else. She felt self-centred and conceited. I loved Rafe, Jon and Asa but not Viv, if I’m honest. If I found the rest of the series free, I’d read it. But I’m not racing out to put my money on the table for it.