According to Amazon, I bought this copy of Kate Chopin’s classic The Awakening on my birthday in 2013. So, it’s sat in my Kindle Cloud for a little while, awaiting some attention. I read it now as part of my Awakening Challenge, in which I set out to read eight books titled Awakening/The Awakening. 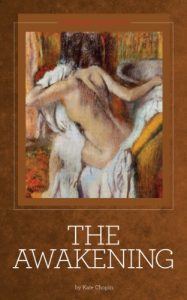 The Awakening by Kate Chopin is a novel set in New Orleans and the Louisiana coast at the end of the nineteenth century. The story centers around Edna Pontellier and her struggle to reconcile her unorthodox views on femininity and motherhood with the prevailing social attitudes of the South.

Meh, I expected a lot more. I intensely related to her feelings on children and motherhood. I also appreciate, that as a woman of the time, she was constrained in a myriad of ways. But I didn’t find in the story the deep, meaningfulness I thought I would. I, instead, found a dissatisfied woman looking to have an affair…or leave her husband for another man. I don’t find that particularly feminist or radical. Her desire to be alone (in the absence of Robert) felt a lot more interesting and I would have rathered that have been the focus.

Having said all that, I do acknowledge that the book was published in 1899. My reaction could be a modern woman’s reading of the text, instead of a true consideration of how it might have been received at the time it was written. I fully accept that if I’d read this with an eye toward critical analysis (like I would have at university), I’d probably say different, more contextual things about the book. As it is, I simply read it as a reader, with little complex consideration. But here’s an essayist from the New York Times doing a far better job of it that I ever could have. And don’t I feel a burke, having missed so much.