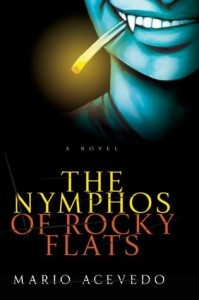 I bought a copy of The Nymphos of Rocky Flats, by Mario Acevedo.

Description from Goodreads:
The first and only vampire book to be declassified by the federal government . . .

Felix Gomez went to Iraq a soldier. He came back a vampire.

Skewering sexual myths, conspiracy fables, and government bureaucracy, The Nymphos of Rocky Flats reveals the bizarre world of the undead with a humorous slant and a fresh twist.

Review:
This book had an interesting premise and with its protagonist who’s seeking redemption, it could have been a really good read. Unfortunately, it took the ridiculous and salacious track instead of the serious one. There was, for example, no reason for the outbreak to be nymphomania other than to be lascivious and hardi-har-har, like a teenage boy. When someone pushed a button causing a periscope to drop into his office, I pretty much just gave up on this one. I finished it, but just to finish it at that point. I think I would have preferred the nymphos to be straight up erotic over the poking fun angle it took.

Despite being an unimpressive hero, every woman in the book came on to him. His internal monologue was annoying. The plot was scattered and disjointed and none of the characters were particularly well developed.

It’s not horrible. The army bit in the beginning was very good. I appreciated that Felix was a POC and that not everyone was rigidly straight, but I wasn’t all that impressed either.