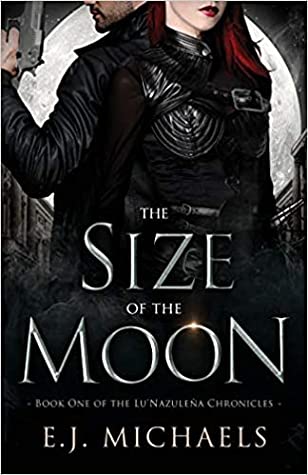 I won an e-copy of The Size of the Moon, by E.J. Michaels, through Goodreads.

Marcus used to ignore the things that went bump in the night. It cost him dearly. Now he helps Autumn track down these dark creatures, letting her do all the destroying…until the high-riser elves threaten his son.

Autumn is a warrior living in a time when warriors aren’t needed, except to dispatch the occasional strig – a deadly creature that feeds off the living. Part elf and part human, she’s been seemingly content for hundreds of years. Things change when she discovers she has deep affection for Marcus…a human. And now his life is threatened by the rogue elf that destroyed her family.

Vowing revenge, Autumn once again takes up the sword to hunt her old prey. Though the elves despise humans, they fear Autumn and unleash a fearsome hoard of predators to stop her. Yet the elves are about to discover how dangerous an enemy Marcus can be. He’s prepared to go through man, beast and elf to keep from losing those he loves again…regardless of the consequences.

I have so many thought about this book, it’s difficult to synthesize them into something cogent. But the one in the absolute forefront is, “Thank freakin’ god, I’m finally finished!” This book is WAY too long. I mean like 2, if not 3 hundred pages longer than it should be.

After that is to wonder if, despite Michael’s author picture, if the book wasn’t really written by a 15-year-old boy—full of hormones, and fatally obsessed with guns and boobs. No? Are you certain? It sure felt like it. I think half the book is dedicated to describing different aspects of the female body—what it looks like, what it’s wearing (miniskirts were very popular), how it’s walking or standing or kissing or pressing its boobs against someone…again. It wasn’t always about sex, but the female anatomy was practically a character on its own. And every single one of those female characters played to the exact same note. They all sounded the same, acted the same, dressed the same (again, the miniskirts), etc. Every single one, from the teenage human ingenue trying to seduce the hero to the 4,000-year-old warrior elf who successfully seduces him, were 100% interchangeable!

And I’d just gripe that Michaels simply can’t write women, but his male characters are all cardboard cutouts too. Granted, he wasn’t so determined they ALL throw themselves at the hero as the women, but they weren’t exactly paragons of depth themselves. The hero especially. I basically hated the hero.

Here’s the thing, he was a likeable fellow, loyal and brave and theoretically badass. So, it wasn’t really him I hated. But it felt so much like Michaels couldn’t imagine anyone but the white, American Male as the hero that he convoluted the whole plot (set in Romania, among Romanians) to center on the least interesting person in the book. And I know some are reading this like, “what does him being a white American male have to do with anything?” I just mean that it’s so often the default, and this book feels very much like it is focused on The Default because it’s the default, not because of any considered reason.

At one point the hero leaves everyone he cares about behind to go off and fight by himself, thinking “this is my war.” I thought it a great parallel to my experience reading the book. Because it very clearly wasn’t his war. It was a war that started before he was born and would likely continue after his blip of a human life ended. And, while that could have been a really interesting theme to explore (American men’s tendency to assume and act as if everything proximate to them centers around them), that wasn’t the case. It was just Michaels forcibly centering the book on the American man, when the book felt like it would have been better served to focus on…hell, almost any of the other characters, but especially the 4,000-yearold warrior elf. Instead, she was supposed to be the most badass, dangerous elf in existence and Michaels immediately reduced her to a simpering, injured, sex-kitten in need of oh-so-important male protection on meeting the main character. Yeah, miss me with that caca.

Which brings me to a simple irritant. If you want your characters to cuss, then let them cuss. I got so tired of all the foreign words whenever a character cursed. I have no idea if it was an actual language or a made up one, but I hated it. It made the already stilted and barely tolerable dialogue even worse. That language was also really inconsistent. Sometimes the elves/dwarfs/etc talked in an old-fashioned manner and didn’t understand sarcasm or a joke, and other times they spoke like modern teenagers.

Speaking of inconsistencies, Michaels had a habit of setting up dictates of the world (elves can only have one child each, mating is forever, whatever) and then breaking them. It made the world, and thus the plot hinging, on it untrustworthy.

All in all, while the ideas in this book aren’t bad ones, it’s not a good read. It’s an especially poor read for any woman even remotely perceptive to the treatment of female characters or gender roles in fantasy. Perhaps Michaels thought giving women swords and telling us they are skilled would offset the cliched treatment, I don’t know. I’ll grant that Michaels allows no on-page rape (though it’s insinuated that it happened in the past), there are some humorous moments (though not usually the passages played for a laugh, those were usually just too ridiculous to be amusing), and the book does have an awesome cover.