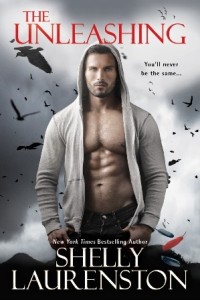 I received an ecopy of The Unleashing, by Shelly Laurenston from Netgalley.

Description from Goodreads:
Kera Watson never expected to face death behind a Los Angeles coffee shop. Not after surviving two tours lugging an M16 around the Middle East. If it wasn’t for her hot Viking customer showing up too late to help, nobody would even see her die.

In uncountable years of service to the Allfather Odin, Ludvig “Vig” Rundstrom has never seen anyone kick ass with quite as much style as Kera. He knows one way to save her life—but she might not like it. Signing up with the Crows will get Kera a new set of battle buddies: cackling, gossiping, squabbling, party-hearty women. With wings. So not the Marines.

But Vig can’t give up on someone as special as Kera. With a storm of oh-crap magic speeding straight for L.A., survival will depend on combining their strengths: Kera’s discipline, Vig’s loyalty… and the Crows’ sheer love of battle. Boy, are they in trouble.

INTERESTING CHARACTERS SEEKING PLOT TO PERFORM IN
Must be action packed and accepting of humour, violence and dogs.

This book is a mess. It has so much potential though. The idea is interesting. The characters, though shallow and undeveloped, are funny. The world, though inconsistent, could support a series. The first chapter sets the book on the right path, even if it does deviate immediately. There is material here to make something great.

Despite all of this, the book is a dud. Why? Because the closest thing it has to a plot, beyond ‘hey, here is a woman and here are a lot of volatile, hostile, RANDOM people she meets one day,’ comes out at 88% and is only introduced before the book ends on a cliffhanger. In other words, this whole 400-page book is essentially a prologue and not even a very good one.

In the introduction, the author states

…The first book in my new series, Call of the Crows, and right off the bad, I want you to understand that this is not a rewrite of an old book nor is it a fleshing out of an old book. The Unleashing is a brand-new book and series, with brand-new characters, brand-new locale, and brand-new trouble. Although my book Hunting Season, which has been out since 2005, was the start of this idea…The Unleashing is me taking the whole thing to the next level, and it’s a definite stand-alone.

Here is an example. At one point two Crows are discussing their wings. One (Annalisa) states it took her wing 6 months to come out. The second (Maeve) said her’s took a year. Kera has been with the Crows 2 or 3 days, but someone decides her wings need to come out now. So, she arranges for the man Kera likes to accidentally walk in on her without a shirt on, somehow thereby forcing the wings to emerge.

But I sat there wondering how that worked. If one character waited 6 months and another a year, then is there something biological that needs to be waited on to develop wings? If not, if it’s just the odd hunching movement a woman would make to cover her breasts when walked in on that forces ones’ wings out, then why would other characters wait so long instead of just being taught how to get their wings? It makes no sense and isn’t explained at all. I mean this in the sense that the author doesn’t even try to explain it and as a reader I had no idea why or how a Crow’s wings come into existence. I was left wondering if it’s explained in The Hunting. I wondered this on several occasions.

This lack of teaching was a constant irritant to me. I understood that the Crows were supposed to be wildcards that didn’t do well with too much structure. But how is a 1,300-year-old institution supposed to survive if newcomers are treated with such open hostility, told NOTHING about their situation and literally expected to be able to fly without a word of instruction? (Especially when also being told repeatedly, “You can always trust a fellow Crow.” Um, pretty sure I saw no evidence of that.) It felt very much like all of the slapstick results of Kera’s lack of appropriate mentoring were only there for the laugh. Like, “Oh, look a topless woman is having a cat fight. Ha, ha, ha…” (And this after she already kicked some serious ass while naked.) Meh.

The book also starts with Kera waking up and being an awesome asskicker. I had such high hopes for the book at this point. That asskicker doesn’t show back up until around 85%. The whole rest of the time Kera just wonders around meeting random, vapid Crows more concerned with the thickness of Kera’s thighs than fighting, doing completely random things and falling gracelessly in love with Vig. And while there was a lot of humour in these women’s shallow comments and ridiculous antics, it’s all POINTLESS and often over played.

It was kind of like seeing Kera join a homicidal sorority (of the Legally Blond variety). And with the Ravens having conversations like this:

“Is pussy really worth what you’re about to do?” the Raven leader asked.
Vig’s brow furrowed as he immediately replied, “Yes, it is.”
“He’s right,” Stieg agreed. “It is.”
“Totally worth it, dude.”
“He’s right, bruh. It’s absolutely worth it.”
“I can’t believe you’re actually asking the question.”

the Raven’s feel disturbingly like a gang of marauding frat boys. (And you’re guess is as good as mine about how many people are involved in that discussion. It’s no clearer in context than in a floating quote.)

Then there is Vig, the love interest de jur and another inconsistent character. He’s said to be scary and dangerous. But we’re shown a quiet, introverted, nice guy. Don’t get me wrong, I liked him. He’s cute. But despite everyone saying how frightening he is, no one, not one single person, shows any fear of him and not once does he do anything to support this assertion.

There are also about a million faceless Crows. You are constantly meeting new ones and losing track of others. And in this endless flow of Crows you get a barrage of wealthy, successful, famous people. After a while it became cheesy (and not the good kind), as if each new famous face is only there for the effect instead of any importance.

All in all, I found this a weak, plotless Urban Fantasy that leans far too heavily on its attempt to be sharp and witty. Its effort is too apparent. It’s trying too damned hard and therefore fails miserably. The writing itself is fine (except for the constant head-hopping), the editing passed muster, and I appreciated having a POC as a main character (as well as most of the female side characters) but I have no desire at all to continue the series.

A note on the cover: I have to ask, considering the book is about a woman (Kera) as she joins and adjusts to an all female fighting unit, why is there a man on the cover? I assume it’s mean to be Vig, but he’s not the main character, so why does he get to be on the cover? It seems to be putting the emphasis on the wrong character.

1 thought on “Review of The Unleashing, by Shelly Laurenston”