I picked up freebie Audible codes for Rachel Ford‘s Tribari Freedom Chronicles somewhere around the internet. 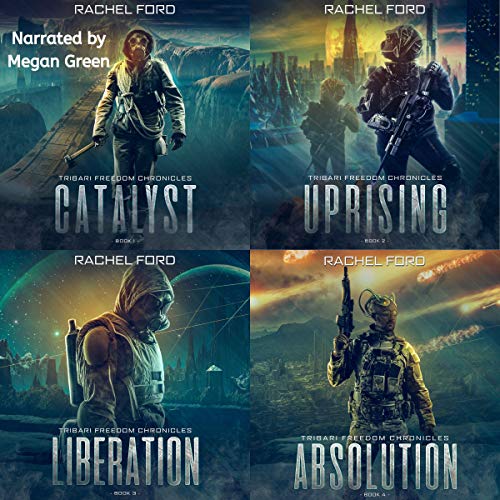 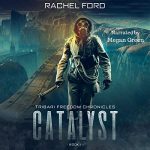 Catalyst: For a week, Brek Trigan has left behind the frigid nights and icy days of life on the mining colony he calls home. He’s on holiday to his ancestral planet, and he finds a sparkling, welcoming world of riches and warmth.

But the longer he remains, the more he begins to see cracks in the glistening façade. When civil unrest erupts, Brek’s plans for a peaceful getaway are dashed. Suddenly he’s drawn into a conflict that will change the fate of his people, whether he wants to be or no

An easily readable, but fairly predictable short story illustrating the evils of capitalism and corporatism. When I finished it, I was curious if it would tie into the rest of the series or if it would be a stand-alone. As it turns out, it does tie it, FYI. 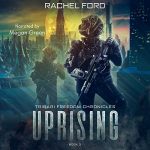 Uprising: A daughter of Grand Contributors. The wife of a reformer. A woman caught between worlds.

Nikia Idan was raised in the glimmering spheres of society’s elite, but she traded it all for the love of a man who wants to change the Tribari empire. Her new reality is harsher than she ever imagined it could be.

When her husband’s push for reform is met with brutal violence, her worlds will collide with a force that will either break her – or the system that brought her to the point of breaking.

Soooooo, this is basically Black Lives Matter in space. As I see it, the Tribari represent black Americans, Grel the protest organizers, Nikia and her parents the ‘nice white people,’ her brother and the other Contributors the rest of white America, the Protectors the police, Elgan and his crew the National Guard (or the ones we wish we had). And while one could argue this represents the generalized fight for social justice and reform, rather than a specific set of events, written in 2019 I can only truly believe the book’s plot is drawn from widely the reported  Black Lives Matter movements. The events of the book aren’t just about oppression and fighting against it, they could literally have been lifted from recent newspapers. It’s all very familiar.

Placing real events in fictional settings can often be an effective way to make a point, bringing people into the lesson. Make a parable of it, if you will. Ford certainly wouldn’t be the first to do it. But I also have to admit that I found it a little tactless to trawl something so recent (current), and that many are STILL hurting from to craft a story. Especially since the heroes here seem to be the ‘nice white lady’ and a national guardsman. (I mean, they’re not actually white. They’re blue-blooded, multi-colored eyed aliens on a distant planet. But they still represent recognizable factions.) So, it feels a little like white savior-ism to top it all off.

I went back and forwards about whether to make this point at all. I support the BLM movements and appreciate anything that might help readers understand the social situation in America. (And I acknowledge the possibility that I’m simply wrong in my assertion.) But it comes down to who gets to profit off of particular stories, if in fact this is based on the recent events in American policing and governance. I don’t feel I’m the person to make such a determination (that would be stepping far outside my own lane), but I also didn’t want to leave out what was, in fact, my primary impression while listening to the book (how familiar it all felt). So, all I’m doing here is noting the similarities between the book and recent(ish) events, and I’ll let others make their own judgement.

None of the above was helped by the fact that the Tribari are supposed to be aliens. They have their own gods and religions, humanoid but not human bodies (again, they’re blue, have blue blood and eyes that change colors depending on moods), different monetary systems, etc. But so much of the world building is just cut and paste from real life. Oil is still paramount, oligarchies still rule, oppression takes the same recognizable forms, public treatment of abortion and abortion clinics are identical, mores feel familiar, as does language. At one point someone yells “Amen” to agree with a speaker. So much familiarity in what is supposed to be alien only reinforced my feeling that this is a thinly veiled version of reality.

I’m hoping the next book moves closer to fiction and the source material a little less apparent. Outside that, I like the characters, the writing is fine and the narrator is doing a good job. 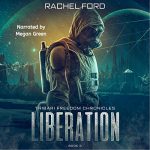 From the frozen prison planets to the glistening streets of Central, corruption and cruelty is tearing the Tribari Empire apart. Four unlikely heroes find themselves on a collision course as they work to save their worlds. If they can’t find a way to bridge their differences, there may be no empire left to protect.

I both liked this book better than the previous one and thought it naive in the extreme. I also felt my initial ‘this is just reality with a filter’ even more strongly than before. Here we moved away from the persecution of the people and on to the revolution. However, it has to be the most limpid revolution ever. The ‘nice white lady’ (as I deemed Nikia in my previous review) makes some rousing speeches, goes about being as pure and innocent as snow, and inspires everyone with her mere presence. Then, sets out to create a perfect socialist utopia that even Bernie Sanders would sign off on. Thus she saves all the poor oppressed people, while somehow still maintaining that her elitist ruling-class family is somehow innocent in it all. (It’s all very familiar.)

Do I sound like I’m rolling my eyes? I was rolling my eyes. I don’t know why it irritates me so much. I think it’s just that it feels discordant, close to real life, but off. Like it’s experienced a phase-shift or something. Or maybe it’s just that it feels like a rip off to see someone take the same social reforms many today would like to see enacted and paint them across science fiction as something new and original. How much creativity does that take?

Beyond my irritation at the mining of present day media for this fictional account, the writing is pretty solid. The editing seems strong (as well as I can tell in an audio book), and the narrator is still doing a good job. 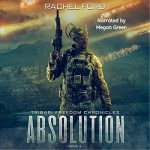 Absolution: New wars and old conflicts. An empire reborn from blood and ash.

Nikia Idan led an uprising that liberated the Tribari people. Brek Trigan saved his colony from starvation. Captain Drake Elgin protected the citizens of Central from loyalist forces. The worst was supposed to be behind them.

When a loyalist fleet appears in Tribari airspace, the tenuous alliance between military and parliament is strained to the point of breaking. Meanwhile, a rogue governor’s quest for independence will put the empire’s promise of freedom to the test.

The decisions of these few will change the fate of many.

I think this was my favorite of the series—all the different plot arcs coming together, a little light, sweet romance cropping up, and the social/political upheaval coming to it’s expected conclusion. I don’t think anyone will be surprised by the ending. Nor would they find it particularly exciting. But it is satisfying in it’s way. The writing was clean and readable (or listenable, since I had and audio version), as it has been throughout the series, and Megan Green did a good job with the narration.

I was still irritated by how close to the real world this alien culture is. Someone jokes about not running marathons, someone else gets on one knee with a ring to propose marriage, wives still take husbands names, etc. It’s all just so very familiar for what is supposed to be patently alien. I guess this could be humans far enough in the future to have genetically changed, but that’s not really even hinted at. There is a ‘original home planet,’ so I guess it’s possible. But the hints are pretty weak if that is supposed to be the case. All in all, I didn’t hate it, but I’m not disappointed to be finished either. 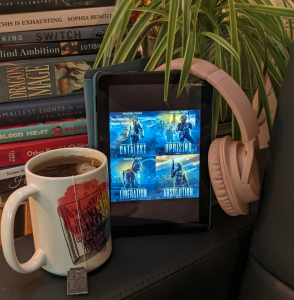