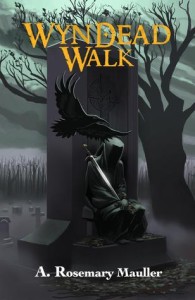 Two years ago today, I apparently downloaded a free copy of Wyn Dead Walk, by A. Rosemary Mauller, from Amazon. So, I suppose it qualifies for my TBR challenge.

Description from Goodreads:
As a practicing necromancer Terrwyn Harvey has seen things that most people only thought existed in nightmares…

and as Keeper of the Dead, supernatural sheriff of the underworld, it’s her job to keep them from discovering the truth.

An illegal spell used to raise the dead has resurfaced and Wyn must find the necromancer responsible before she loses her job or worse… her life.

Review:
This book was ok, amusing in its own way, but it was not a winner for me. I thought a lot of it just barely hung together, I found the main characters annoying and I figured out the bad guys before the 50% mark. Meh.

My biggest complaint comes down to the difference between what we’re told Wyn was and what we’re shown she was. We’re told that she’s the Keeper of the Dead, essentially the über necromancer, but we’re shown that she is utterly inept.

We’re told that she’s been training in necromancy since she was born and is a child genius (thus her high position at a mere 23-years-old), but in the book I remember her using magic twice. Once she needed help with something we’re told she’s an expert at and once as more of a relaxation technique than as a skill. Not once did she use it to defend herself when attacked.

We’re told she’s taken down vampires, demons, witches, warlocks, etc. But we’re also told that her training did not include combat teachings. A fact that makes no sense since her father was also fighting the supernatural, so it seems an odd thing to leave out. Especially since when she became Keeper of the Dead, she inherited a sword held by eight generations of Keepers, inferring that fighting is an expected skill set. What’s more, each and every-time she’s attacked she almost dies and has to be rescued, at one point by a 12-year-old boy. (Because apparently even he’s better than she is.) She swings her sword twice in the whole book, despite lugging it around all the time. She’s useless.

This all made the argument that she was special, stronger and/or skilled enough to be given the highest necromancer position available and be responsible policing all activities between the living and the dead and for training all future necromancers in the St. Louis area completely unbelievable.

The vast majority of the book is dedicated to her love life; or rather to the men she lusts after and who, of course, lust after her. First, there is her long-term, on again off again, live in boyfriend who despite seeming like a nice guy gets screwed in the book. Then there is the sexy vampire. Then there is the hunky werewolf, who she randomly invites out for a drink and kisses. I have no idea why. He played no role in the rest of the book. My guess is he’s a set up for another triangle in a future book. Meh.

The writing itself was fine. It flowed well enough and other than Wyn and Alex’s constant and annoying bickering the dialogue flowed well. The book needed a serious re-edit though.

All in all, the book was entertaining enough as long as you don’t look too deeply at the logic of it.