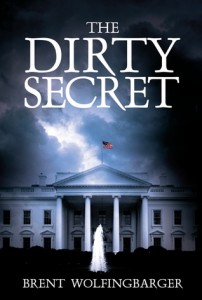 Author, Brent Wolfingbarger was kind enough to send me a copy of his book The Dirty Secret for review.

The difference between victory and defeat in the Electoral College comes down to 259 votes in West Virginia. A state senator desperately fights back against a lawsuit that is pushing his family’s company toward bankruptcy. A vice presidential candidate’s adulterous affair threatens to explode in his face and burst into the world’s headlines with devastating consequences. A ruthless billionaire will stop at nothing to avoid facing justice for his crimes. A small town prosecutor stumbles upon a plot to win the election by any means necessary: High-tech manipulation of electronic voting machines, creative interpretation of arcane election laws, bribery, blackmail and even murder.

And Rikki Gudivada and Dave Anderson – two star-crossed former lovers from opposite sides of the political fence – are drawn back together as the battle rages for West Virginia’s 5 electoral votes, racing to solve a murder that imperils the very heart of America’s constitutional system while each struggles over the same question: Is anything more important than winning the White House?

This is a fairly straight-forward political thriller. In the beginning there are a number of loosely connected characters following their own paths. It invites the reader to speculate how they might eventually intersect and when the proverbial fecal matter hits the proverbial rotating blades it isn’t in quite the way you expect. Which is a pleasant surprise.

The characters are nicely fleshed out and most are even likable. The language is sprinkled with the kind of colorful sayings that make me miss the American good ‘ol boys, some of it quite witty. You really find yourself invested in rooting for everyone.

There is quite a lot of legalese, or at least descriptions of how the laws around the electoral process works. I found some of it a bit like sitting through a civics class, but it really is necessary to understand how the attempted scams are meant to work. So though it causes the middle of the book to sag a little it is worth it. Additionally the whole tail end kind of hangs precariously on a number of convenient coincidences, but where would political thrillers be without coincidence? Plus, the purex measuring cup scene was pretty classic.

All-in-all The Dirty Secret is a nicely bundled and entertaining read that I would recommend for those who have an interest in politics.

I spend a lot of time of Goodreads. Partially because I have a book out and feel uncontrollably compelled to obsessively check for new reviews and/or comments. But also partly because I just love perusing the forum threads, pontificating on who knows what, and generally making an online spectacle of myself.

A thread that recently caught my attention questioned why Amazon reviews tend to be tougher than Goodreads reviews. To be honest this isn’t something I’ve noticed, but I trust that whomever started the thread had a reason (possibly personal) to ask the question.

Why do you suppose Goodreads reviewers are harsher than Amazon reviewers? It’s an interesting phenomenon. I wonder if Amazon filters out some of the bad ones in order to boost sales numbers….

Responders came up with a number of plausible reasons. It might be that readers are at least peripherally aware that a book could be someone’s livelihood and are cautious about being too critical in the selling environment. Come on, it’s possible. It could be the terms and conditions or one website being more willing to enforce them than the other. It could be that readers are more likely to have purchased the books they review on Amazon since Goodreads is a great place to find free reads.

Since the initial question wasn’t entirely clear whether it was referring to the actual review or the star ratings, my own contribution to the discussion centered on the later. Having thought a little more on the matter I think it is worth reviewing how each site classify 1, 2, 3, 4, and 5 stars.

I don’t know about the rest of you, but if someone says a book was OK I take that to mean the person didn’t dislike it and it is still worth reading. I don’t have the same feeling about a 2 stars rating. It is below the median (just as Barnes and Nobles clearly states) and feels like a bad rating. I say that even though I’m currently looking at the break down of the rating system. The end result is that I could read the same review on both sites and be pleased with one and disappointed with the other.

This is especially pertinent when one considers that a number of sites-Smashwords comes to mind-don’t dictate what their stars mean. It is up to the reviewer (and then the reader) to decide what they stand for. I suspect people have an innate sense of bad (1), good (3), better (5) and tend to not put too much thought into the ratings beyond that. But the next time you feel disappointed or put off by a review pause a moment and see what the number of stars is actually meant to mean. 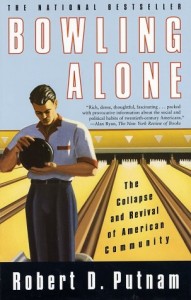 I am in the tail end of a Msc in Social Change. The program is essentially half social policy and half social statistics. Bowling Alone was unofficially required reading since Putnam was referenced in almost everything else we read.

Description from Goodreads:
In a groundbreaking bestseller based on vast new data, Putnam shows how we have become increasingly disconnected from family, friends, neighbors, and our democratic structures–and tells how we may reconnect.

If you have any sort of interest in social behavior you’ll want to read this book. It pulls a lot of threads together to make one concise and frightening point about modern Americans’ tendency to interact (or not). The idea not being that Americans no longer bowl, but that they no longer join leagues and bowl in groups. It’s something an idea we are all fairly familiar with, but Putnam pulls together a number of social surveys to illustrate the point.

The book isn’t perfect. Anything more than a perfunctory look at the statistics reveals some inconsistencies in the reporting of results. I’m not suggesting any type of falsehood, but the incline of a line on a graph with 10 year increments can appear far more dramatic than one with 1 year increments, for example, even if presenting the same information. Bowling alone is cleverly formated to always seems the most shocking.

Having said that, this book rocked my world. It managed to make a heavily statistical subject readable, made some interesting points, and provided a plausible (and largely blameless) reason for the decline in group interactions. I definitely recommend it.