I tend to pick up any of K.F. Breene‘s books that I see pop up as freebies. Some of the series are really big, though. So, I also have a tendency to pick the books up and then ignore them for a while, assuming I don’t have them all. I grabbed Born in Fire in 2018, then Raised in Fire, and Fused in Fire in 2021. 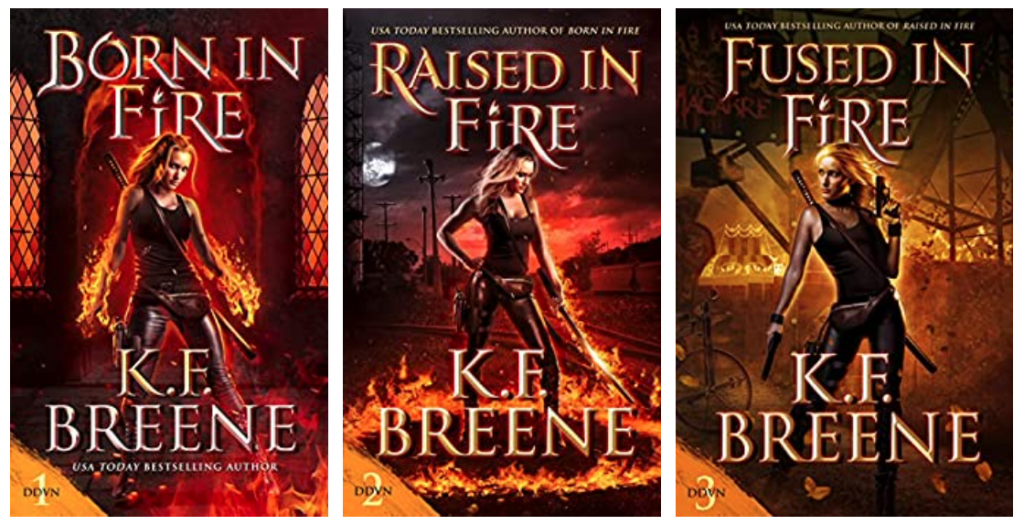 Supernatural Bounty Hunter isn’t the sort of thing you see on LinkedIn. But with a rare type of magic like mine, I don’t have many options.

So dangerous or not, the job is mine. And it was going fine, until an old as sin vampire stole my mark, and with it, my pay day.

Knowing I’m poor and desperate, he has offered me a job. I’ll have to work by his side to help solve a top secret case.

Everyone knows not to trust vampires. Especially a hot elder vampire. But without any other jobs coming up, I’m stuck. As I uncover a web of lies and treachery, revealing an enemy I didn’t know existed, the truth of my identity is threatened. I might make it out alive, only to end up in a gilded cage.

I suppose this series was OK. It definitely wasn’t a favorite of the Breene series I’ve read so far. I thought the world was interesting enough. And I liked the main character well enough. But I was just kind of underwhelming on the whole. Honestly, the side characters were my favorite part of the whole thing, and when the heroine and hero can so easily be outshone, there’s a problem of some sort.

So, all in all, I’d call this a middling read. It’s not bad enough that I regret reading it. But it’s also not good enough that I continued into the next part of the series (focusing on Penny), even though I have it.

I initially saw A.J. Lancaster‘s Stariel Quartet recommended on Tiktok. It was on my radar. So, when I saw book one, The Lord of Stariel, come up as a Kindle Freebie, I nabbed it. Then I bought the rest of the series (The Prince of Secrets, The Court of Mortals, The King of Faerie, and A Rake of His Own) one by one as I finished each preceding book.

Everyone knows who the magical estate will choose for its next ruler. Or do they?

Will it be the lord’s eldest son, who he despised?

His favourite nephew, with the strongest magical land-sense?

His scandalous daughter, who ran away from home years ago to study illusion?

Hetta knows it won’t be her, and she’s glad of it. Returning home for her father’s funeral, all Hetta has to do is survive the family drama and avoid entanglements with irritatingly attractive local men until the Choosing. Then she can leave.

But whoever Stariel chooses will have bigger problems than eccentric relatives to deal with.

For the first time in centuries, the fae are returning to the Mortal Realm, and only the Lord of Stariel can keep the estate safe.

I binged these books, reading them back to back with nary a breath between. So, I’m just going to go ahead and review them the same way. In a sentence, I adored this series. I will 100% be looking for more of Lancaster’s work.

I love a practical heroine, and Hetta is eminently practical. She’s also strong, loyal, brave, and witty. In fact, the whole cast (and the narrative itself) has a dry, witty character to it that I enjoyed. It startled more than one laugh out of me. I think it’s the narrative tone that I liked most about the books.

I also can’t tell you how much I loved the characters. Even the ones that I didn’t initially care for, such as Jack, I came to like in the end. (And the bonus book about Marius and Rake was a joy.) Family is important to each of them in their own way, and the reader feels this. I’d like to see a few other side characters get their happily-ever-afters.

The mystery was a little easy to predict, the villain overcome a tad too easily, and the pacing is a little off at times. But overall, I’m not sad to have read the series. In fact, I’ll miss it now that I’m finished.

I recently asked for recommendations for monster romance or PNR that stood alone. Jessica Marting‘s Magic & Mechanicals series was one that someone suggested. And as I happened to already own Wolf’s Lady (book one), I gave it a read. 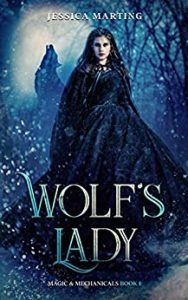 The only mistake Lady Adelle Thornber ever made turned into a scandal that rocked London and saw her banished to Scotland, the reluctant bride of a reclusive baron. But Lord Henry MacAulay isn’t what she was expecting: he cares deeply for his barony and for her.

As the sole heir to the Roseheath title and werewolf alpha, Henry knew that he had to take a mate someday. He just didn’t expect to find her in a disgraced noble’s daughter forced into marriage with him.

As he falls more deeply in love with Adelle, he can’t bring himself to tell her what he really is. But if he doesn’t, it may not be his werewolf nature that could tear them apart.

I thought this was a sweet, if predictable, shifter romance. I liked Adelle and Henry. I especially liked that they were plain-spoken and simply told each other what they wanted from the other. This meant that, outside the obvious deception mentioned in the blurb, there was very little angst in the development of the relationship. However, I also thought the villain was overblown and cliched. And the plotting is pretty shallow. There isn’t a lot to the story. But for a sweet, fluffy, easy read, it’s worth picking up. 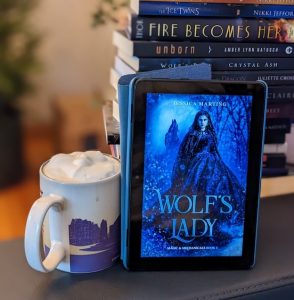