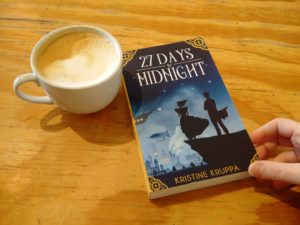 I won a copy of 27 Days to Midnight, by Kristine Kruppa, through Goodreads.

Description:
Everyone in Dahlia’s world knows when they’re going to die. Except her.

Her father has never shown her the pocket watch counting down the days she has left to live. When he sacrifices himself to save her from her scheduled death, Dahlia abandons her comfortable home and sets off after his murderer to uncover the secrets her father died to protect…and the time research that could bring him back to life.

Then she meets Farren Reed. She should hate him. He’s an enemy soldier, a cowardly deserter, and the most insufferable man Dahlia’s ever met. Still, she needs all the help she can get, and Farren is the only chance she has to find the man who murdered her father. But Farren has only twenty-seven days left on his watch.

In that time, Dahlia must recover her father’s time research, foil a psychotic general’s plot, and learn to survive in a world that will never be the same. But the research holds secrets more dangerous than she had ever imagined. She will have to choose what is most important: revenge, Farren’s life, or her own. And time is running out.

Review:
Thank goodness, I’m finally finished with this book. I feel like I’ve been reading it for eons….ok, a week, but still, forever. It wasn’t particularly bad, I was just a tad bored with it. The writing is lovely, editing clean and I love the cover. But it felt very much like most of the book is spent with Dahlia and Farren running around reacting to things and not really progressing the plot.  Several convenient things pop up to help them in their times of need, the motivation of the villain seems flimsy, at best, and I really need to know how human lives came to be attached to watches. I mean, how does a newborn get a watch? Do they come into existence magically on birth? Do parents have to order them? If so, how does the baby live until it arrived? What if no one buys them a watch? I needed this aspect of life dependent on an external device explained. But all in all, it was a fine book, an OK book.

What I’m drinking: A latte at a artsy, if somewhat grotty cafe called The Stone Spiral that I am quite fond of.