This isn’t a review. I’m stating that up front. But I’m going to take a moment and use this as launching point to have a little rant. As with other such rants, this is my opinion. I’m claiming no authority beyond that. But I am a reader, a voracious reader and when I encounter the same things irritating me over and over I need a place to vent. 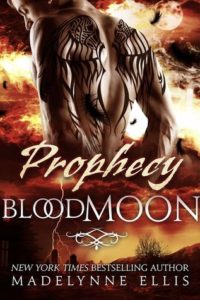 Madelynne Ellis‘ book Prophecy: Blood Moon was supposed to be the fifth book in my Blood Moon Reading Challenge.  It was the book I had the highest hopes for in the list of seven I planned to read. Which is saying something; I have found an imperfect, but perceptible correlation between books with common names and common, uninspiring stories. This means when I set out to read seven books with essentially the same title, I knew some would be flops. But I held out hope for this one.

And based on the writing, I may have been right. It seemed fine. Unfortunately, I only made it 15% in before I decided not to finish it. And if you knew how bad the last two Blood Moon books I read were, but still finished, you would understand this is not something I do easily or happily. So, if I’m willing to slog through poor plotting and bad writing to finish a challenge, why did I give up on this one? Because I had no idea what was happening.

Here’s the thing, this is very clearly labeled as book one, but it’s not the beginning of the story. There is a prequel called Broken Angel available in a compilation titled Possession. Anyone who has read many of my reviews has probably hit at least one in which I’ve stated loudly how much I hate this trend toward teaser prequels. I hate picking up a story and reaching the end without followed any sort of complete arc. It leaves me feeling cheated.

Here we have just the opposite problem. Apparently, Broken Angel, rather than being a little teaser about the characters, or an extra side story IS THE BEGINNING of the story being told in Prophecy. So, without having read Broken Angel I can only scramble along and try to keep up with the goings on of Prophecy, ignoring all references to things I don’t know. This makes for a very poor reading experience.

And it’s not just prequels that cause this problem. Anyone who has followed my twitter lately might think I’m a little obsessed with complaining about spin-off series.

Things I hate: Picking up #1 in a series, only 2 discover it’s #1 in a spin-off, thus really like #8 n the series & unfollowable. #resentful

What do I hate more? Having it happen twice in two days. This time my #1, was actually a #11 overall!

I felt burned because two books (No Boundaries and Dragon Fall) in a row, despite being labeled #1, first in a series, turned out to be the first in a spin-off series and neither stood alone well. You were very obviously meant to have read the books in the previous series to fully engage in the new series. As with the second tweet, how could that not be the case? No matter how conscientious the author is, there is simply no way to integrate the knowledge and information of 10 previous books into one new one.

So, I started thinking. Why do authors or publishers do this? I’m not in the publishing industry, as I said, I’m a reader. So, my guess may not be correct, but it will be indicative of what these actions on the part of authors and publishers feel like for readers. And here’s my guess, it’s all to trick you into buying more books.

The simple fact of the matter is that I can no longer go to the book store or library, scan the shelves, pick up something that’s numbered one, buy it and trust that I’ll be able to sit down and read it. These days there is a better than average chance that I’ll need to either also have bought a prequel or the previous series the book is based on.

Because let’s be logical. When a publisher puts out a book that is number eleven in a series, there is a limited audience: predominantly those who are following the series and read the previous ten books. I don’t think I’m the only one who would be wary about putting money out for a book ten volumes into a storyline. But, oh, if they call it a spin-off and label it number one, a certain number of uniformed buyers won’t realize it’s part of a larger series and buy the book when you wouldn’t if it was labeled (what I’d deem) more accurately. Make sense?

I feel the same way about prequels generally and the fact that they’re often free doesn’t negate the feeling of being manipulated for me. Often you read a prequel and it’s only part of a story. You have to buy the next book to finish it. Or in the case of Prophecy, you need to have bought the prequel in order to read book one in the series.

It’s not the spending of money that is an issue. I have a limited book budget, but I have no qualms supporting artists by paying for their work. It’s the attempt to entrap me, trick me, manipulate me into buying something I wouldn’t have otherwise that infuriates me. Not to mention that all of this is chipping away at my reading enjoyment. The number of books I’m reading that are unsatisfying because they are only part of a story that an author/publisher decided to break up or number in some artificial manner to make more money is steadily increasing.

It brings less-than-cordial utterances like these out of me. 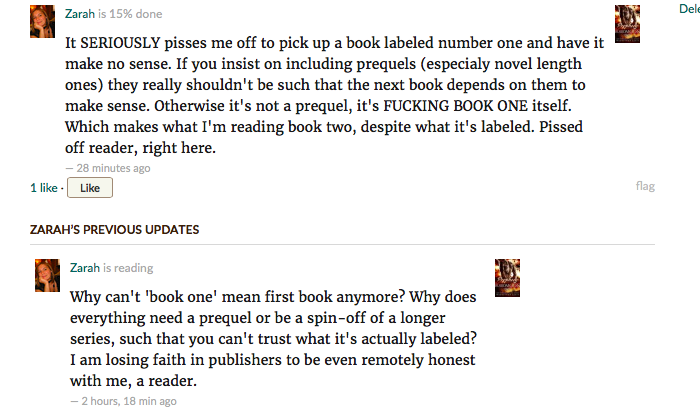 Tell me honestly authors; are those the emotions you want to be bringing out in your readers? I ask because, as the industry moves farther and farther in this direction, I feel like this more and more. I could fill pages with reviews in which I’ve been spitting mad about only reading part of a story and then expected to pay again to get the ending (or beginning).

And yes, I understand what a serial is. But they are OFTEN not accurately labeled as such and so readers are not fairly warned beforehand that they are in fact buying a serial. Take for example the review I wrote of Fated Nights: 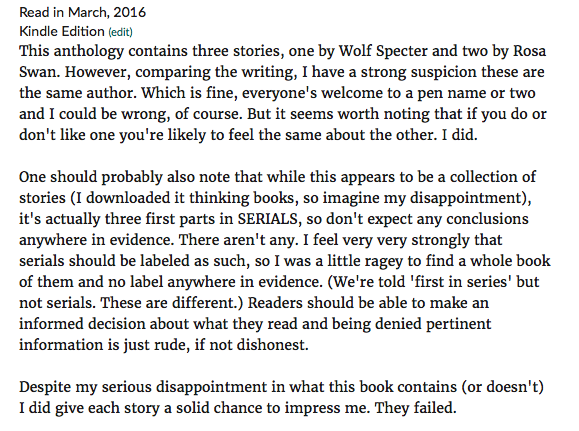 Three serial starters in one book and not one accurately labeled. Because to do so would discourage people form buying it. That’s not an allegation against any one author, but against the industry that’s making tricking the reader the new norm. And I am getting madder and madder.

I haven’t the slightest idea what to do about it. I’m just one reader and maybe I’m the only one so bothered by the situation. New readers probably don’t even remember a time when they could trust the label on a book to be accurate. But I thought I just might bust if I didn’t give myself the chance to cry foul.