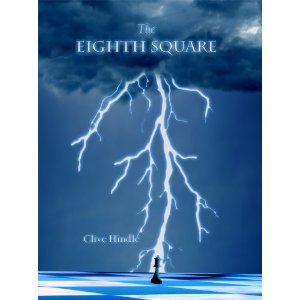 Description from Goodreads:
Jack Lauder, a man of simple pleasures, was a successful lawyer who enjoyed nothing more than climbing in the mountains and a good old competitive game of chess. But he is about to be dragged into a deadly world of deception, where truth and fiction become inseparable, and the life he knew will be changed forever. Somebody has a very personal vendetta against Jack and he must put all the pieces of the puzzle together to figure out why he is being framed. He finds himself caught up in a web of drug-smuggling and murder. In a haze of confusion, Jack will have to think several moves ahead to survive this hostile game against an opponent who will stop at nothing until Jack is annihilated.

The Eighth Square begins with Jack Lauder’s return to his legal practice. He is almost immediately commissioned to handle the post-humorous estate of an estranged acquaintance. From the very beginning this strikes him as strange and the impression is only amplified as the story progresses. It is pretty clear that Jack is wrapped up in something bigger than himself. The story progresses quickly as he tries desperately to extricate himself.

I liked the book. It moved along steadily, had some interesting characters and the dialogue felt natural. There were times when I was unsure if scenes were dreams, memories, or reality. I’m aware that neither was Jack some of the time, but as a reader I might have liked to know where I was standing a little more clearly. Not knowing made me uncomfortable.

It would also probably help if the reader had some knowledge of chess, rock climbing and/or sailing. I was able to follow and enjoy the story even though I don’t intuitively know which square on the chess board is is e4 or what the queen’s gambit looks like, what a pro does while one is climbing, or what it means to reef a sail. But someone who knows these things might have gotten even more from the story than I did.

As Jack tries to thinks five moves ahead of his opponent the story hangs more and more tenuously on coincidence and luck for Jack’s continued success. I didn’t find this particularly believable, if I’m honest, but I can’t say that it detracted too much from my enjoyment. It’s a good psychological thriller, set in interesting terrain, and I’m glad I got the opportunity to read it.