Oldman Brook (or his representative) sent me a beautiful copy of The Wizard of Crescent Moon Mountain: Elven Resurrection. I say beautiful because I really love the cover.

Description from Goodreads:
Elven boys Finn and Beezle enter a time portal just before their race is wiped out by an otherworldly warrior and his goblin army. Travelling 3,000 years into the future and arriving in snow-filled lands, the boys are saved from the cold by two shape-shifters sent by Greybeard, the wizard of Crescent Moon Mountain. Out of their time and depth, Finn and Beezle are enlisted to join Greybeard and his friends on a quest to save the world of Everlast from the very same otherworldly warrior….

The Wizard of Crescent Moon Mountain: Elven Resurrection is an epic adventure very much in the style of Tolkien. Humans, elves, shape-shifters, dwarves, wizards, dragons, goblins and more vie for power and survival in the land of Everlast. Most of which contribute at least one colourful character to the cast of the book. I really found the characters themselves enjoyable, though I found their mannerism and flippant lack of sentiment toward their enemy equally disturbing. Let me elaborate (hopefully without spoilers). Greybeard and his crew set out on a quest to save the world essentially. Who is friend and who is foe is fairly clearly delineated. Warrior and his goblins are bad, Greybeard and his army are good. However, both sides treat the lives of the enemy with frightening disregard. This is, perhaps, to be expected in a dehumanised enemy, but not in those that are presented as the representative of the morally superior. An example: at one point the ‘good guys’ callously joke and laugh as they watch the enemy being incrementally and, almost certainly, painfully burned alive. Not funny and more to the point not appropriate in a children’s novel.

If  The Wizard of Crescent Moon Mountain was written for adults, who can be expected to think deeply about such things, I might find this ubiquitous callousness an interesting addition. It might prompt readers to remember that histories are written by victors, who have a tendency to gloss over the cruelties of their own. In a children’s novel, however, I find it dangerously close to suggesting that it is ok to kill another as long as they are an enemy, which is of course a subjective classification, making the actual lesson ‘it’s ok to kill just so long as you think you are on the right side.’ I have no doubt that the Hitler Youth were taught a very similar lesson along the way somewhere.

This is my only real complaint though. A whole host of varied and interesting characters are introduced in an unusual narrative. It is told in present tense, which takes some getting used to, but I liked it once I had. The writing is clean and uncluttered for easy reading, and though the first in a series, the book wraps up nicely so there aren’t any unbearable cliffhangers. Its well worth a read. 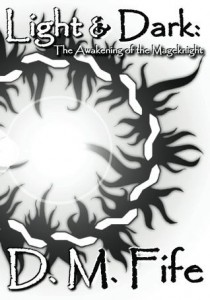 Author, D. M. Fife sent me a review copy of Light & Dark: The Awakening of the Mageknight.

Dany Firoth is an average thirteen-year-old who finds himself at the beginning of his eighth-grade year, struggling with some of the more common oncerns that plague a boy of his age: bullies, homework, and his mother. Sabrina Drake is the new girl. She is beautiful and spellbinding, but carries a fantastic secret.

Accepted into the White Rock Academy of Illumination, a school for young squires destined to become Knights of the LIght and battle the forces of the Dark with magical weapons called Bondeds, Danny joins his five closest friends in the training of their lives. Honed in the techniques of blade work by an Elvin sword master and educated by a colourful assortment of knightly instructors, Danny and his friends are placed on the path to becoming knighted members of the Light. However, the Dark may have other plans as they unveil a sinister plot in this fantastic tale of dragon-riding adventure, sword-wielding action, and coming of age drama.

Light & Dark: The Awakening of the Mageknight follows the eventful life of thirteen-year-old Danny Firoth and his friends as their world is turned upside-down by the sudden realization that creature of myth might not be so mythical after-all. After a slow start the book moves along at a nice clip. An interesting assortment of characters pepper the pages, some of them more sympathetic than others. I was particularly fond of Calador and Chris, but had little attachment to Doug or Matt. The perpetrator of the sinister plot isn’t too hard to guess, but neither is he/she so obvious as to make finishing the book obsolete. There is just enough misdirection to make you doubt yourself. The writing is generally crisp and easy to follow. My only complaint is Fife’s REPEATED use of the same phrases, most notably “for but a moment,” “did as bid,” and “kept his council.” There are a couple other ones that show up too often for the repetition to go unnoticed, but they weren’t as quite as frequent.

Be forewarned though, this is apparently the first in a series. Unless I know before starting that a book is part of a series I’m always a little disappointed to reach the end of it only to discover it isn’t actually the end of the story. The book is already 312 pages long, so I understand why it had to be broken up and though threads are left open for continuation it isn’t too much of a cliffhanger. I’d definitely be interested in seeing where Fife goes with it. I would consider this middle grade or lower young adult, but I enjoyed it all the same.