I mostly use this blog as a reading journal. I post reviews of books I’ve read. I occasionally branch out to something else, but reviewing is my main jive. Unfortunately, more often than not, when I have something to say that isn’t a review it’s a complaint. I feel like it makes me seem far more negative than I am. But I kind of feel like sometimes a complaint needs to be made.

I saw a re-release of The Never Ending Story in the theatre recently. I was thrilled to take my kiddos to see a movie that was a sharp memory from my own childhood. Unfortunately, I thought it was overpriced and they showed a “How the Movie Was Made” feature before the film that gave away all the key points of the plot and the ending. It utterly ruined it. I hate to be a complainer, but in those circumstances something had to be said to save future viewers from the same fate. Features with spoilers should be after a film, not before.

Well, today I’ve come across another ‘something has to be said’ scenario. For background, I read a lot. I also gather books from a number of sources. Lately, I’ve been entering a lot of Goodreads’ giveaways, especially since I installed my Little Free Library and can share my winnings with my neighbors. And I’ve been pretty lucky with my winnings.

But one of the most important aspects of a Goodreads giveaway is listed as the second sentence in the guide to posting one. Namely, “Members are encouraged but not required to write a review of the book they receive.”

For people like me, this isn’t so much an issue. I generally do write reviews of books. I run a hobby book-review blog for goodness sake. But that’s not true of everyone who enters such giveaways. Many have never written one, are intimidated by the thought, even. Which makes the insert that arrived in my most recent won book infuriating. In fact, when I showed it to my husband his response was that I should send the book back rather than accept such dictates. 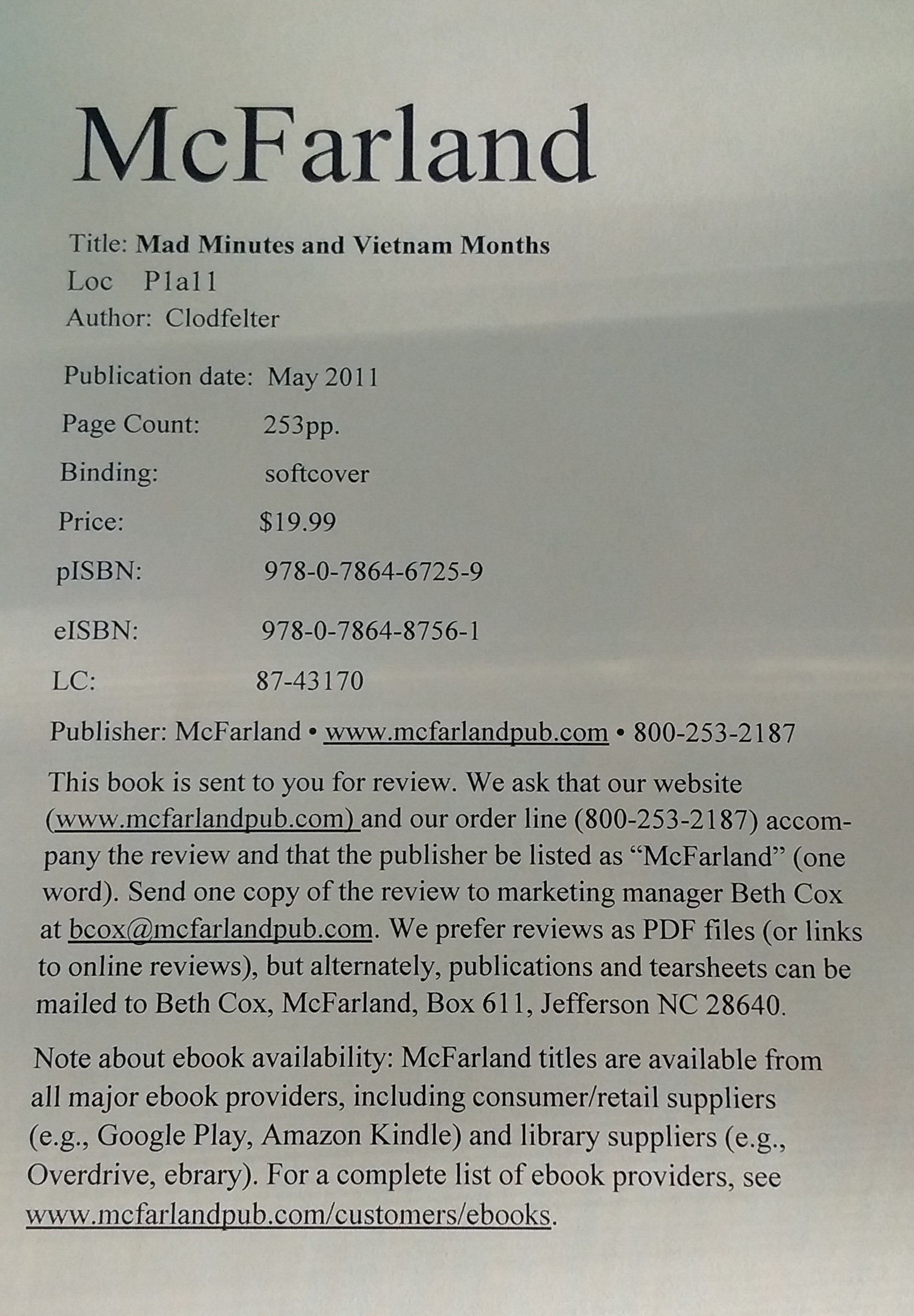 Now, I don’t want to seem ungrateful, but this is problematic for several reasons. First, it simply breaks the ‘no obligation’ clause that Goodreads sets as part of its giveaway terms. But further, this is not a book I requested for review. This is a book I won. So, it’s simply not been sent to me for review. It’s been sent to me as a prize.

But not only does it assume I’ll accept the responsibility to review a book, despite my giving no such guarantee, it presumes to tell me exactly what I’m expect to include, down to the phrasing. I’m expected to include an advertisement for their company, McFarland “one word.” Then, I’m expected to send a copy to the marketing manager. But it’s not enough that I write a review that includes exact dictated information and I go out of my way to send the review to them (rather than the onus being on them to search out their own reviews), but I even have to send it in a particular format, PDF. But wait, generously, they’re even willing to let me pay for snail mail postage if I prefer. It leaves no room for inability or unwillingness on the part of the recipient. How arrogant can they be? The tone alone, even if all of those rules didn’t make me seethe, would offend me. I am not their employee. They are not paying me for a job well done. How dare they presume to order me such?

I am infuriated at this letter. This makes the book not a prize but a job. I run a book blog that reviews several hundred books a year and I would not allow myself to be beholden to such exact instructions. I can only imagine what a normal, non-reviewing, reader thinks of it.

Now, it’s possible that they looked me up before they sent the book and knew they were sending it to a blogger. But even then, the arrogance needed to try and micromanage a reviewer to such a degree is staggering. And to do it without actually acknowledging the implied interaction is ineffective, to say the least. Lastly, I’ll acknowledge the possibility that these books were pre-packed for reviewers and someone didn’t think to remove the leaflet. Let us hope that’s the case.

At this point, the only reason I’m not listening to my husband is that I see no reason to punish the author for the misbehavior of the publisher, who frankly should know better, IMHO. This is almost a perfect example of how to put a reviewer off reading your book, certianly how to put me off.

Reviewers out there, how would you feel about this? Readers, how about you? Publishers, am I missing something that makes this less insulting than it seems?