I somehow came into possession of a copy of D.W. Rigsby‘s In Light Of Death in October of 2020 (that’s when it was uploaded to Caliber), most likely through a Bookfunnel promotion (or something similar). But I wouldn’t swear to that, just that I came by it legitimately. 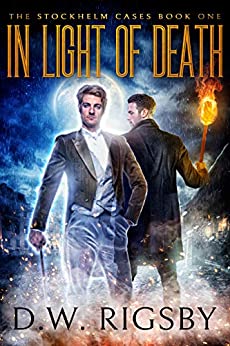 Some say the dead don’t talk, but I know better.

My name is Lucius Samuel Stockhelm. I’m an inspectre, a paranormal detective with a ghost sidekick. I work out of my home in New Cross, Ohio. As far as I know, I’m the only non-professional inspectre conducting supernatural investigations. You can find me in the Harken, just ask Toledo the barkeep. Believe it or not, I’m not even sure why I’m doing this kind of work.

Though I have learned a cross is a powerful weapon but anointing oneself while confronting a demon isn’t that easy. Oh, and let’s not forget holy water and salt; the two most used items in my arsenal against the demonic. Yes – these are the tools I’ve been given to defeat the occult.

With being fired from the post office and a decent night’s rest becoming an issue of some importance, I need work, and soon. A distraught call to my neighbor, a professional inspectre, starts this line of dominoes, making me believe things are looking up, but they are about to go from worse to terrible. Someone is leveraging dark supernatural forces to commit a series of horrific murders. Tracking a multi-killer takes me into the dangerous underbelly of New Cross, from shady characters to demons, while I try and defend myself with archaic tools against the unholy of unholys.

In this supernatural mystery series, you’ll find more than ghosts and demons. There’s an array of interesting characters with deceitful behaviors, a plethora of occult activities, with a historical backdrop to boot. Come along and have a look – it’s just what you need to brighten your evening. Turn on your gaslamp, but make sure it’s low so you don’t spook the visitors. Now it’s time to take a peek behind the cover and see what’s on the other side of the mirror.

I have a major gripe and it’s one I’ve ranted on before, because it really does irritate the life out of me. It is my very strong opinion that if I pick up a book that is labeled as book 1, I should be able to read it without confusion. If there is a book before it, even a short one, that needs to be read for it to make sense, then it isn’t book 1, it’s book 2. That prequel (or whatever) is book 1. A book labeled as book 1 is where a reader should be able to pick up without trouble. Can there be prequels? Sure, but they can’t be integral to understanding the events of book 1 and not be counted as such.

I say all that because it’s pertinent to In Light Of Death. I had no idea what was going on for well over half the book. There must have been a lot happen in that 116 page prequel that I didn’t know existed when I picked up book 1. The reader is dropped into In Light of Death, lost and confused. And honestly, even once I piece together what was happening, it still felt like cheese clothe. I felt like my grip on understanding was always tenuous and Rigsby made no effort to firm anything up.

Which is such a shame. Because, there toward the end, I actually came to like Stockhelm and Alarbus. I might have been interested in reading more of their adventures. But as it is, I will not be continuing the series. I just spent too much time uncertain of what was happening and trying to follow characters’ leaps of logic, because (I as a reader) wasn’t given enough information. 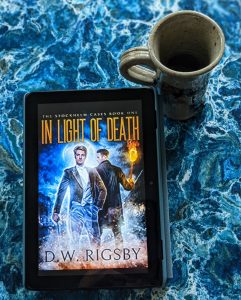