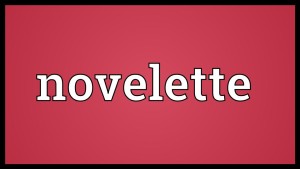 This is a second slew of novelette length stories. As a reminder, in case you found this blog randomly instead if following and therefore seeing the 10 other times I’ve mentioned it, I’ve Broken the wrist of my dominant hand. So, typing is slow and awkward…everything is slow and awkward. I can’t even easily click next page on the darned Kindle. However, I don’t want to stop reading or reviewing, so I’ve compromised with myself. I’m going to clear all the short stories, novelettes and novellas from my shelves, writing brief reviews of them. When the cast comes off I’ll start on books and full length reviews again.

You can go here to see those stories that were less than 39 pages long and here for those that were 40-49. This page will be 50-59 or there about. These are all approximate groupings, but I imagine you get the point. So, here we go.

Banished: The Gods Among Us, by William & Pamela Deen: Simply not very good, it’s unfocused, repetitive, uses the cliche rape of a woman as nothing more than the impetus for male action, and never culminates into any sort of identifiable story.

How Ninja Brush Their Teeth, by R.A. Hobbs: Well, color me surprised, with a cover and title like this one I expected a humorous ninja parody at best. But it’s a genuine ninja-assassin-finds-his-humanity tale and I genuinely enjoyed it. Extra points for the kick-butt female character.

The Memory Man, by Helen Smith: I would have like to have been given some answers, but I think the confusion is part of the point. It ends with as many questions as it starts with, but the story is atmospheric and interesting and I do like the circular nature of psychic communication that is hinted at.

Leximandra Reports, and other tales, by Charlotte E. English: A cute introduction to the characters of Draykon, but probably only worth reading if you’re interested in the series. It is actually several vignettes and ends at 63%. The rest is a teaser or the first book in the series.

Deuce Coop: Taken, by Laura Harner: I found it horribly repetitive and as a result didn’t feel like it progressed enough, especially for a serial. While I appreciated the existence of bi-sexuals, I had problems with the cliched representation of big, strapping, possessive, alpha tops and small, wispy, openly available bottoms, with no overlap. I basically thought the whole thing depended too heavily on pre-existing, M/M shortcuts. Edit: I realized after reading this that it is the book referenced in this post. I wouldn’t have read it if I remembered that it was plagiarized!

The Gatekeeper, by Heather Graham: Mildly entertaining but unexceptional in every way, as it’s all been seen and done better before.

Through The Wall, by Keri Ford: Cute if you like this sort of thing; basically just a series of mishaps leading up to sex and a HEA. Was interesting to see the woman as the aggressor (even if she did still have to be sexually inexperienced and clumsy in her seduction to maintain “good girl” status) while the man held off for more.

A God To Wed Her, by Y.L. Abraham: The first Abraham work I’ve read that was a complete story, instead of a serial (which is a positive). But I’m afraid I just didn’t care for it. I found it trite, with very little development and inconsistent characterization.

Touching Ghost, by Regina Carlysle: Basically all sex, of the raunchy, ‘ram it home’ and ‘pound away’ sort. I thought the language crude and unappealing, especially since it was supposed to be romantic instead of faceless f-ing. It was also repetitive, as phrases were oft reused from scene to scene. All talk of patriotism and the SEALs also felt artificial and stilted, more like how a recruiting pamphlet reads than how soldiers/navy-men would talk about themselves. Despite being a part of a series the book stood alone.

Of Ants and Dinosaurs, by Liu Cixin: More of fable than anything else, but it had an interesting theme/lesson, even if I fond the reading a bit dull.

The Sentinel, by Eden Winters: It’s kinda like a sweet version of Kurt Russell’s Soldier (1998), if the baddies never showed up. I liked the first half better than the last half and thought there were some inconsistencies that niggled at me. But mostly I liked it.

Deep Currents, by Marie Brown: Not at all what I expected, but I quite enjoyed it. Well, written with snappy dialogue.

End of the World, by S.A. Archer: Interesting and well enough written, but really just a prologue to the series. No real merit on its own.