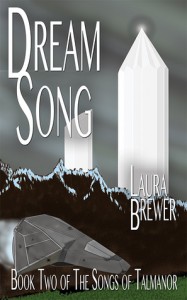 On finishing Selarial’s Song (which I reviewed here)  I raced right out and bought the sequel, Dream Song.

Description from Goodreads:
Selarial is trapped and injured on the distant planet Taledra. Alcar, now on Sorth, finds himself in a conflict with the Singer Council over a rescue expedition. At the same time, the need to discover who betrayed his former command in the Fleet gnaws at his conscience. Both goals drive him to perfect his psychic abilities, establish a new Istari Order to help protect the Coalition from the increasing Thess’n threat and find a way to expose the traitor in the Coalition.

Hostilities increase on both fronts. The Thess’ns attack Sorth directly and the Singer Council place psychic bonds on Alcar to prevent him from going after Selarial. After the attack, Lord Nafron (Selarial’s father) and Alcar increase Sorth’s covert ops with the Trader’s Guild aimed at intelligence gathering and destabilization of the Thess’n Empire. Nafron works in the Coalition Assembly to pass a Declaration of War. Alcar, with Selarial’s team, leaves Sorth to join the Traders in operations inside enemy space.

On Taledra, Selarial lies in a coma from both physical and psychic trauma. It takes a desperate effort on her mother’s part to heal the psychic damage and wake her. As Selarial recovers, she joins the rest of her crew in exploring the remnants of Tarkus’ beginnings. Disturbing clues appear that point back to the far past in an unexpected direction.

Events draw Alcar into a position he never wanted, but must take up if the Coalition is to survive. The only way to get to Selarial is to first get the Coalition’s house in order.

Review:
Like it’s prequel, Dream Song contains an interesting account of the accord that deep understanding of one another can produce. Here of course it is possible because of some individuals psychic abilities, but I think the lesson could be taken as a general one. I appreciate that. The story itself is an interesting one and I also really enjoy Brewer’s writing style and use of language.

Unfortunately I don’t think this book quite reached the high standard of Selarial’s Song. For one, it isn’t as well edited. Granted the book hasn’t even been out a month yet. Hopefully the author will take the opportunity to give the text one more pass and put out a 2nd version. For another, it is quintessentially a middle book. The beginning of the story had already been established but no true conclusion is reached by the end. While Book One chronicles the universe’s acknowledgement that they are at war, this book sets the stage for that war. There is a lot of strategizing, team building, discovery of new talents, etcetera, but very few game changing events. Even the passing of some of the main characters or the reunion after years apart of others wasn’t given any real weight.

Lastly, and a personal irritant, Alcar was simply too good at everything. More than once he offered advice or instruction in something he recently learned to others who would have been previous experts. No matter the specialty he was deferred to. He was accepted as leader of Sorth and the coalition (and by extension the Fleet) without any real descent. Could it really be so easy? I have a hard time accepting that. His mere presence completely eclipsed Selarial, who was hardly in the book until the last 15% or so. Even then he, not her, was the leader. Correct me if I’m wrong but weren’t Roth and Kirrlea HER team?

Don’t get me wrong, I still enjoyed the story. It is a lot more intellectual than its description lets on. I always like that in a book. I’ll almost certainly read the next one when it comes out. But if the pacing is anything to go by The Songs of Talmanor is going to be a very long series.