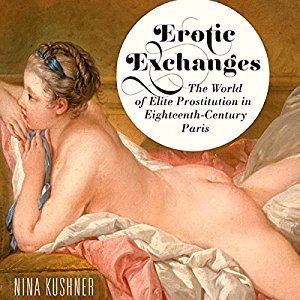 Description from Goodreads:
In Erotic Exchanges, Nina Kushner reveals the complex world of elite prostitution in eighteenth-century Paris—the demimonde—by focusing on the professional mistresses who dominated it. These dames entretenues exchanged sex, company, and sometimes even love for being “kept.” Most of these women entered the profession unwillingly, either because they were desperate and could find no other means of support or because they were sold by family members to brothels or to particular men. A small but significant percentage of kept women, however, came from a theater subculture that actively supported elite prostitution. Kushner shows that in its business conventions, its moral codes, and even its sexual practices the demimonde was an integral part of contemporary Parisian culture.

Kushner’s primary sources include thousands of folio pages of dossiers and other documents generated by the Paris police as they tracked the lives and careers of professional mistresses, reporting in meticulous, often lascivious, detail what these women and their clients did.  Rather than reduce the history of sex work to the history of its regulation, Kushner interprets these materials in a way that unlocks these women’s own experiences. Kushner analyzes prostitution as a form of work, examines the contracts that governed relationships among patrons, mistresses, and madams, and explores the roles played by money, gifts, and—on occasion—love in making and breaking the bonds between women and men. This vivid and engaging book explores elite prostitution not only as a form of labor and as a kind of business, but also as a chapter in the history of emotions, marriage, and the family.

Review:
I think Kushner did a good job of taking what seems like an exciting subject and making it really academic, but also of taking information from a really dry source and making it readable. See, the vast majority of the data for this book about elite prostitutes in eighteenth-century Paris came from police records. So, as you can imagine, the source is informative about some things, but silent on others and there isn’t a lot Kushner could be expected to do about that. I’m very glad I got the audio-version, I could listen to this a lot more easily than read it.

If you had asked me if a modern American could judge people, decisions and actions of people from eighteenth-century France, I would have said, “Of course not, it’s a whole other culture.” But one of the things Kushner did really well here was create for the reader (listener) a true understanding of just HOW different life in eighteenth-century France was. The understanding of family units was different. The ideas and ideals of love were different. The place and importance of sex was different. Gender expectations were different. Age of majority and adulthood were different. The social hierarchies were different, and on and on and on. There is no way to center and understand the demi monde or dames entretenues (kept women) using modern standards. I learned a lot about the world these women lived in and, in a way, I found this the most interesting part of the book.

I did feel like some important aspects were left out. What of children? Several times having children was mentioned. But how can we understand the life of women, especially women who have sex for a living with questionable preventative measures, without touching on children? What happened when they were pregnant? Who raised the children? Who claimed them?

Similarly, I felt it an oversight that Kushner didn’t address, even briefly, that as the vast majority of her data came from police reports, most of the information was therefore first interpreted and filtered by men. She addresses them being police, but not the gender aspect. If history has told us anything, it’s that men often misinterpret or misrepresent the motivations of women. At one point in this very book Kushner mentions that a police report calls one woman lazy because she hasn’t gotten another job and has instead returned to prostitution, while the circumstances were almost certainly that she couldn’t find another job and therefore did what she needed to do to survive. And even those reports written by madams themselves, were written to be given to a male audience they needed to keep pleased with them. How did this male gatekeeping effect what is and isn’t known today? Perhaps we couldn’t ever really know, but I would have liked a discussion.

All in all, I thought it was a thorough academic handling of an interesting subject and Sally Martin did a fine job narrating it, even with all the French, as far as I could tell.