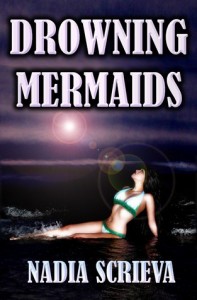 Deep under Arctic waters lies an ice kingdom carved into a glacier. Those who dwell within it possess magnificent biological secrets. Due to the dangers of impending war, the Princess of Adlivun is forced to flee her undersea utopia and regroup with her sisters in Alaska. Captain Trevain Murphy is a successful king crab fisherman who has spent his life building his empire above the sea, and knows nothing of the empire beneath it. When he meets a mysterious dancer whose father has recently died, he extends kindness towards her, unaware of her unique genetics and royal lineage. Trevain’s attraction to the enigmatic Aazuria Vellamo will involve him in dangerous designs that will forever change his life, and his perspective on himself and his world. He embarks on perilous journeys in which he will need to release all of his insecurities and inhibitions in order to survive.

I was a little wary of Drowning Mermaids (Sacred Breath, #1) at first. The cover made me think it might be more smut than anything else, but the synopsis really looked interesting and it has good reviews, so I decided to give it a chance. I’m glad I did.

I’ve seen the author refer to the story as Darwinian Mermaid’s, and thats a fairly good description. Aazuria and her elegant entourage are no Ariel. They don’t have shining scaled tales. They don’t use sea shells in a poor attempts at modesty (and even less so for support), and they know human culture fairly well. They do, however, have an overbearing and questionably protective sea king as a father, so I suppose there are similarities.

One of the things I liked about Drowning Mermaids is the idea of mastery, the idea that given time (of which the mermaids have an abundance) humans can truly master an art. Scrieva doesn’t present her mermaids as magical, spell binding, holders of innate power over the senses of humanity. Instead they are skilled, carefully trained and practiced. It reminds the reader that if even mythical creatures have to work at what is important to them, we can’t expect to do any less.

The mermaids do seem awfully up on modern language, medical terminology, and weaponry. I found this a little hard to accept, considering their recent circumstances. Scrieva handles the language difference between land and sea people marvelously, but I thought the comfortable use of Methemoglobinemia, for example, stretched the credibility a little too far.

Despite this, without a doubt the highlight of the book was the actual writing. Scrieva’s ability to infuse a slight sense of irony into even the most somber passage was a sheer joy to read. The occasional use of sarcasm at the expense of the characters made the reader feel party to a private joke, and created a comfortable intimacy. For this reason, more than any other, I’ll be picking up the sequel Fathoms of Forgiveness (Sacred Breath, #2) .