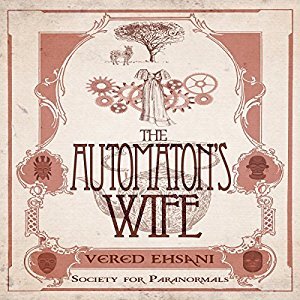 I received an Audible code for the purchase of a copy of Vered Ehsani‘s The Automaton’s Wife. I read and reviewed book one in the series, Ghost of Tsavo, here.

Description from Goodreads:
Beatrice Knight has enough to contend with: a zebra is dead on her lawn, her horse is possessed and a gentleman has arrived with the temerity to propose to her. To top it off, her dead husband Gideon has absconded with an automaton, threatening to return for his wife. The wife in question however soon has other issues, for a killer has moved into town with a nasty habit of carving up the victims. As luck should dictate, who should be the next target but Mrs Knight herself?

Review:
I do believe I enjoyed this more than the first. I’m not entirely sure if it was because it was a better book or because the addition of a truly wonderful narrator (Alison Larkin) made the audio experience more fulfilling than reading it. I liked book one, but I really liked this one.

As before, I found Beatrice witty and self-reliant. I liked the tension between her and My. Timmons, though it’s much downplayed here and the mystery held its own. I did think it wrapped up a little too quickly and Larkin’s insistence on saying Zeebra (American), instead of zebra, in the English style irked me. But all in all, I look forward to continuing the series.