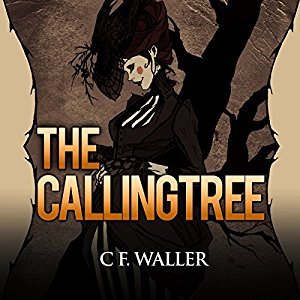 I received an Audible copy of C. F. Waller‘s The Calling Tree through AudioBookBoom.

Description from Goodreads:
Dominick Dunn is in people acquisition. When the phone rings he shuffles off to the far corners of the globe to retrieve the captured, then turns them over to his employer. He doesn’t actually believe these people are immortal, but the pay is good and he likes to travel. Despite rumors that his quarry meets an unthinkable fate at the hands of his employer, he’s content with his lot in life.

Aaron Wessker is miserable. His life has not gone according to plan. Trapped in a dead end job bartending in Vegas, he longs for a family he lacks, or at least the possibility of a girlfriend.

Their lives are about to intersect, causing them both to rethink their place in the world. More importantly they will have to change their opinions of the possibility of immortality.

Unfortunately for both of them they will have to do this very quickly. Dunn’s quarry is also being pursued by something much more deadly than his employers.

Review:
A solid three stars. Awesome cover and I enjoyed the story and the characters a lot, but there is a formalness to the writing that never let me wholly sink into it. And as I listened (I had the audio version) I finally figured out what created this terseness. Two things: there is s decided lack of contractions and the speech tags are too often not simply ‘said.’ I’m not one who claims a writer should never use anything other than “”bla, bla, bla,” she said.” But it sure is hard to make “”bla, bla, bla,” she reiterated” as inconspicuous. None of this is helped by Baker‘s narration, which, though smooth, is additionally stiff in places, with a couple oddly pronounced or emphasized words. As an aside on the narration, I greatly disliked the echoing effect used to show internal thoughts.

There were one or two possible consistency issues that I raised my eyebrows at. For example, at one point a waitress walked by after I was sure the characters had left her bar and gone to a different restaurant. Maybe I misunderstood something, but…

Lastly, there were a few aspects of the story that irked me a little, though these are personal pet peeves and might not bother others. Most of them are men relating to women issues that I figure are symptoms of a male author, as there is a decided male gaze.

One, every waitress in the book is hit on by someone. The vast majority of female background characters, in fact, only seem to be there for a man to comment on. Two, the ‘hero’ gets the girl for no apparent reason at the end. I suppose just because that’s what is supposed to happen. There is nothing up to that moment to suggest there is a romance in play or even that she is a woman interested in romance. Three, (sorry to be vague, but I’m trying to avoid a whole spoiler) the very last little twist isn’t possible without the ‘wife’s’ death. And since they all know that would be inevitable in order for that twist to occur, that means they threw her life away in the end. This seems unlikely if he loved her so much, but also and more importantly, makes her feel like a substance-less prop, as female characters so often are.

All in all, not bad at all, but maybe not my favorite of the year.