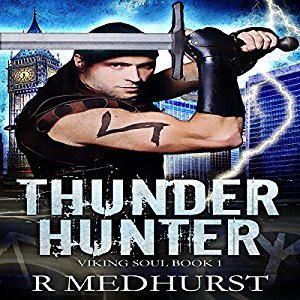 I won a copy of Rachel Medhurst‘s Thunder Hunter from Audiobook Access. Oddly enough, I already had a kindle copy of it and it’s included in the Bad Magic compilation, which I also happen to have. So, I have three copies of the book somehow.

Description from Goodreads:
A thousand years, that’s how long I’ve been hunting the Fallen Ones that escaped Freya’s field. One hundred and ninety five down, five to go. Just five disgusting evil spirits until I die and Thor’s thunder will be returned to him. Nothing will stand in the way of me completing my mission, not even the woman who claims to be a descendant of Freya. I will kill the next Fallen One, no matter what.

Review:
Well, I did not like that AT ALL. I have rarely come across a ‘hero’ that I liked less than Trigger Thunder Hunter. There was 100% no character development to him except that of horn-dog, sexist misogynist His constant internal dialogue about every woman he saw irritated me beyond bearability. Every waitress, female villain, club-goer and passer-by on the street had to be remarked upon. Even the ones he was actively battling to the death. I swear every single one had a pert bottom or lush lips or a pinched waist and EVERY SINGE ONE threw themselves at him. (Talk about a male gaze, geez!) He was beyond nsufferable. I hated him.

AND Here’s the thing, Trigger is said to have had sex with several of the female descendants of Loci. (You might notice him having sex to be a theme of this review. It sure was of the book.) I know the author meant this like him being so irresistible, having such machismo that any woman would want him, even his enemies. But this makes no sense to me. I could not fathom how women who had been raised since birth to believe a man evil and it their moral duty to kill him could turn around and let their guard down enough to have sex with him. So, the only way I could make the idea of him having sex with the women he turned around and killed make sense was through coercion and/or rape. And once that idea set in, I couldn’t lose it. At one point he had a little black dress from a past lover/victim in his home to lend out. But it had also been made abundantly clear that he didn’t ever bring anyone home. So, did he have sex with her, kill her and then bring the dress home as some sort of macob trophy?

Honestly, even if he isn’t a rapist (which in my mind he must be), what sort of man repeatedly, even regularly has sex with women he plans to kill when he’s finished? Not a good one, which might be fine, as the Thunder Hunter is meant to be an antihero, but he sure isn’t one I’m interested in reading about. And I was so sick of his constant commentary on women that I wanted to slap him and the author for writing him. Plus, there was just too little story around his apparent sexual irresistibility.

And just in case anyone has made the mistake of thinking this a romance, give that idea up now. It is not. The only people he was shown actually having sex with were randos in the club while he treated the female main character abominably over and over and over again.

There is just SO much sexism in this book. The whole thing is just steeped in it, and since it’s written by a woman it felt a lot like internalized misogyny to me. Should we expect to be looked at as objects that men can give out as gifts? As I hinted above with Trigger’s very male gaze, ever single women was present solely in sexual context. Even random ones like a waitresses and secretaries. What’s more Trigger, written as THE MAN is shown as so full of himself and arrogant that even goddesses kneel at his feet. What chance have mere mortal women, who must be less than him, have? I absolutely had to force myself to finish this book.

Then there is the 220-year-old virgin girl. 220-years-old and the most important things about her are that she’s small, cute, naive and innocent. Sorry, what? 220-years-old and you expect me to believe she basically hasn’t lived. What’s she supposed to have been doing for 220 years to stay so innocent and ignorant?

Then there is the uncomfortable treatment of queerness. A man who was clearly and openly bi sexual is repeatedly referred to in ways such as having a “confused sexuality.” There is more than one such comment. Trigger seems ok being hit on by men, but it’s always with a sense of making fun of the person attracted to him. There is lesbian sex directed by a man solely for the benefit of a male viewer. It all very very uncomfortable, but it’s supposed to be titillating and dark.

Less egregious than all that were the annoying flashbacks and the way information just happened to fall in Trigger’s lap just when he needed it.

Lastly, the narrator was completely wrong, or at least his portrayal of Trigger was. Trigger was Scandinavian, but Ian Fisher played him a very English. True, Trigger lived in London, but he’s not a Londoner. The very same thing could be said for Chloe, the female side character, she’s Scandinavian but played as English (even when she’s teased for sounding American). This I think is more a reflection of the author choosing the wrong narrator, than him doing a poor job. Because honestly he did a fine job with the actual narration.

All in all, I very much disliked this book and have no desire to continue the series. The writing itself is mechanically fine, but I’m not interested in subjecting myself to more.