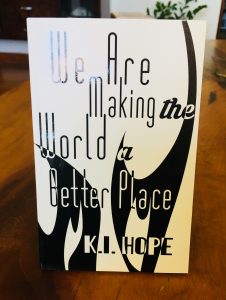 I won a copy of K.I. Hope’s We Are Making the World a Better Place through Goodreads.

Description:
In the tradition of Albert Camus’ The Fall and Vladimir Nabokov’s The Eye, K.I. Hope navigates the internal workings of one mind as it steadfastly trims and skims speech in the main medium of modern communication: the Internet.

As new content is created constantly online, who shapes what we ultimately see? Speech may be free but it is still limited in scope, and those boundaries are further defined not by the government, but the platforms used for expression. Being subjected to terms of service is only the beginning, as the consequences of limiting language extend beyond the screen, spreading across cities, silencing certain parts of society from speaking on the issues that affect them most.

We Are Making The World A Better Place traces the narrative of a person who is in such employ, as they remove words with all the fervor of a zealot, hell bent on bringing every conversation to a quiet, harmonious conclusion.

Review:
This was an interesting read, full of adroit commentary on life in the age of Silicone Valley and social media. It starts out quite slow and maudlin. It felt quite disconnected and I wasn’t sure it was ever going to coalesce into a single, followable story. By the half-way mark, however, it did. It was still more of a series of interconnected vignettes of a single character’s life than a plot-directed arc, but it developed an identifiable moral and meaning. The ending did seem to come about quite quickly, feeling a little rushed. But all in all, not a bad read.