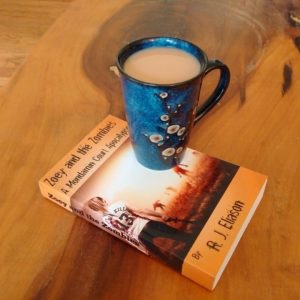 I won a paperback copy of Zoey and the Zombies: A Mondamin Court Adventure, by R. J. Eliason, through Goodreads.

Description:
The world is over ran with undead. Giant hordes of zombies are pouring out of the East Coast, threatening the Midwest. The defense of Mondamin Court, a quiet neighborhood in Des Moines, Iowa is up to a disabled cop, a fourteen year old boy and a transgender girl. What could go wrong? Mondamin Court is a typical lower middle class neighborhood in a midwestern city. The people are a cross section of normal Americans. Each book starts with the same setting and characters but they face a different apocalyptic scenario.

Review:
I found this enjoyable. I really appreciated that it took on some serious themes and included some intriguing human/social insights. But the only thing that separates it from a hundred other zombie survivor books is the presence of a prominent lesbian couple and a trans character (who is admittedly badass).

These inclusions are great, but not enough to carry a book. Unfortunately, I kind of felt like the author expected it to. She went to great efforts to include several diverse characters, as well as do things like present a prostitute in a humanized light, which is unusual and, again, great. But unfortunately she fell prey to as many stereo-types as she upended and eventually the variety felt forced. Partly because there are about a million characters to diversify. Far, far, far, far, far, far too many characters are in this book. I very quickly gave up on keeping track of who was who, outside of the main ones.

The main characters were varied and some of them were complex, flawed but redeemable. Others, not so much, but with so many I don’t know that it would be possible to flesh them all out. A lot of them, especially the young, were forced to consider heavy ideas and I liked how a lot of it was handled.

There are some pretty significant plot holes and, despite the blurb describing the people of Mondamin Court as “a cross section of normal America,” they seemed to have unusual and convenient skills to survive the zombie apocalypse, not so normal really. How many of your suburban neighbors know how to use a halbert, own katana or wakizashi, or happen to take belly dancing that includes scimitars, or are fully prepared preppers with hydroponic stations, know how to can and stretch rations almost indefinitely, or keep goats?

All in all, when I look at technicality I find complaints, but if I stand back and just think about my reading experience, it’s more positive than not.

On a side note, not even really as part of my review, I couldn’t help noticing some odd formatting in the book. 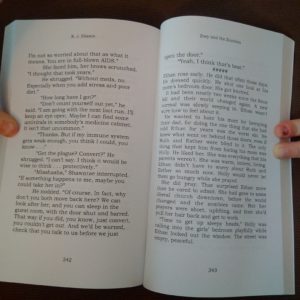 Here is an example. The font size changed, as did the justification of the margins and I think the line spacing. Again, it’s just something I noticed. It didn’t really effect the reading experience other than occasionally being pulled out of the story by a double indention or style change. *shrug*

What I’m drinking: What the English might call Builder’s tea. One inexpensive bag of black tea, quite strong and a dash of milk. This is one of my comfort drinks. These days, I’m often off dairy. So, I don’t drink it as often. But for pure, melt into the couch relaxation, it’s my go-to drink.