I borrowed a copy of Betwixt, by Darynda Jones from the local library. You guys, I actually went INTO the library and browsed the shelves. It was the first time I’d been able to do that in months! 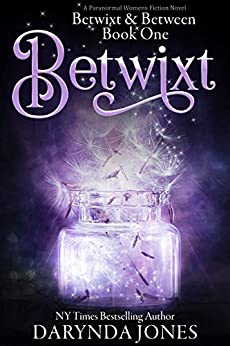 Divorced, desperate, and destitute, former restaurateur Defiance Dayne finds out she has been bequeathed a house by a complete stranger. She is surprised, to say the least, and her curiosity gets the better of her. She leaves her beloved Phoenix and heads to one of the most infamous towns in America: Salem, Massachusetts.

She’s only there to find out why a woman she’s never met would leave her a house. A veritable castle that has seen better days. She couldn’t possibly accept it, but the lawyer assigned to the case practically begs her to take it off her hands, mostly because she’s scared of it. The house. The inanimate structure that, as far as Dephne can tell, has never hurt a fly.

Though it does come with some baggage. A pesky neighbor who wants her gone. A scruffy cat who’s a bit of a jerk. And a handyman bathed ink who could moonlight as a supermodel for GQ.

She decides to give it three days, and not because of the model. She feels at home in Salem. Safe. But even that comes to a screeching halt when people begin knocking on her door day and night, begging for her help to locate their lost objects.

Come to find out, they think she’s a witch. And after a few mysterious mishaps, Dephne is beginning to wonder if they’re right.

I generally liked this. It was fun and easily readable. I’ll say that up front. But I have complaints. For one, I halfway suspect it wasn’t initially written as a Paranormal Women’s Fiction book. Of course, I can’t know one way or another, and maybe it was and just isn’t steeped in the genre. (But I really do half think it was rewritten to fit the new fad.)

I’ll grant the heroine is 44 and there are paranormal elements…so, Paranormal Women’s Fiction. The book even starts with the seemingly requisite mid-life divorce. But beyond that I didn’t feel Defiance’s age at all. Any quip or memory she referenced was from high school or below, as if she hadn’t had an additional 2 decades of life experience to draw from. Her parents still play a large part in her life, as if she hasn’t aged past just leaving the nest. She still gets excited over band t-shirts and binge drinking. She just didn’t feel 44 and neither did anything else about the plot. So, I kinda feel like the book is Paranormal Women’s Fiction in name and window dressing only. At least the hotties were described as silver foxes, instead of young studs, I guess.

Beyond that, I did laugh a lot. But I also frequently felt like it was trying too hard to be quirky and funny. I liked the characters, but thought they all took to the previously unknown paranormal world far too easily. And I like the sexy hero, but there is so little progress in that department and so little interaction between him and Defiance that it was soundly disappointing. And the whole thing often felt unfocused and erratic.

Despite all that, as I said, I did enjoy it in general. I probably will continue the series (for Roane more than anything else). But I’m in no great hurry about it. 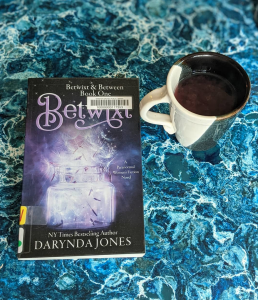