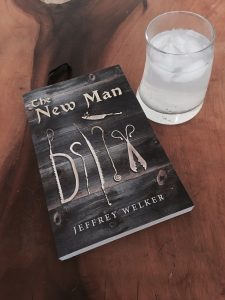 I received a copy of The New Man from the author, Jeffrey Welker.

Description from Goodreads:
Found documents in a medieval Polish ruin reveal strange secrets from a past best forgotten. The eternal struggle to transcend the limitations of the human body and the human consciousness is no modern invention. Travel the ancient world with the deeply flawed and deeply curious Duke of Masovia as he perfects his art – the art of science, the art of alchemy, the art of necromancy – whatever it takes to achieve the ultimate goal: The New Man

Review:
Slow but enjoyable. It has a definite gothic horror feel. Imagine Victor Frankenstein had never found his moral compass and never saw the arrogance in playing god with the creation of life. Now give him the funds and resources to follow his experiments to their full, bloody conclusions. You will have Duke Siemowit II of Masivia. He is one scary son of gun.

But the diaries on which the book is based are his. So the gruesome tale is told entirely from his calm, collected, dispassionate point of view. He never flinches from his own depravities, in fact doesn’t even see them as problematic. Hundreds died at his hands, but it’s all in the name of ‘science,’ as far as he’s concerned. It’s chilling, his disregard for human life.

The writing is clean and easily readable, for the most part. I got REALLY tired of footnotes, though. They were interesting and definitely gave this work of fiction a more believable mien, but they became disruptive after a while.

All in all, a good read. It was slow, so I wouldn’t call it a page turner. But it’s thought provoking and for those who enjoy the gothic, this is worth picking up.