I purchased an e-copy of K.B. Wagers‘ Behind the Throne from the dreaded ‘Zon. 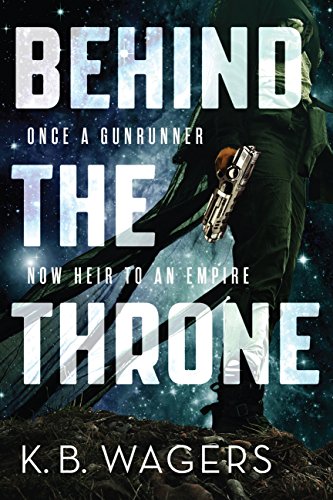 Quick, sarcastic, and lethal, Hailimi Bristol doesn’t suffer fools gladly. She has made a name for herself in the galaxy for everything except what she was born to do: rule the Indranan Empire. That is, until two Trackers drag her back to her home planet to take her rightful place as the only remaining heir.

But trading her ship for a palace has more dangers than Hail could have anticipated. Caught in a web of plots and assassination attempts, Hail can’t do the one thing she did twenty years ago: run away. She’ll have to figure out who murdered her sisters if she wants to survive.

I’ll say up front that this book didn’t turn out to be what I expected. The cover led me to expect a woman of action, out effecting change in the world(s). What I got was a woman who spends a lot of time changing from one fancy dress or sari to other fancy suits, drinking a lot of chai, and effecting change by dent of surviving, mostly thanks to the efforts of the men around her (who she allows to make most of her decisions and looks to for plans and instruction almost constantly).

And I’m not saying I didn’t enjoy the book. I actually did. I liked all the characters. I liked that it had both male and female characters of note, but no romance. I loved that Hail was almost 40.  I liked the writing, the humor, and the world. But the book wasn’t what I was hoping for.

What’s more, it kind of failed in some of what it was. It tried really hard to subvert gender norms by giving the reader a matriarchy where men are largely and systematically disenfranchisement (as woman have been in the past). But it was just lip service. As others have pointed out, if you made Hail male and the guards female, this book wouldn’t work. It’s simply too firmly entrenched in expected gender norms, which means it’s not actually as transgressive as it’s clearly trying to be.

But again, none of that would really matter if I hadn’t gone into the book expecting more than I was given. All in all, I’ll likely finish the series. I did like the book. It just wasn’t the book I’d hoped it would be. 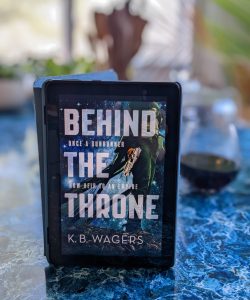 BEHIND THE THRONE by K.B. Wagers – Review

I borrowed an e-copy of Andrzej Sapowski‘s The Time of Contempt through my local library. (Links to my reviews for The Last Wish and Blood of Elves are below.)

Geralt is a witcher: guardian of the innocent; protector of those in need; a defender, in dark times, against some of the most frightening creatures of myth and legend. His task, now, is to protect Ciri. A child of prophecy, she will have the power to change the world for good or for ill — but only if she lives to use it.

A coup threatens the Wizard’s Guild.
War breaks out across the lands.
A serious injury leaves Geralt fighting for his life…
… and Ciri, in whose hands the world’s fate rests, has vanished…

I have to be honest, if I’d started this series here I wouldn’t be continuing. I liked the short stories (The Last Wish) and enjoyed book one (Blood of Elves), but I struggled to finish this book. I found the writing really stiff. I don’t know if that’s the fault of the author or the translator, but it was no fun to read. I struggled to keep the characters and locations straight and there was too little indication of changing POVs. So, I often didn’t know what was happening, since I didn’t know we’d changed characters. Then to top it all off, the last quarter starts in on all the cliched man-writing-fantasy BS. Suddenly it’s wench this and rape that, etc. And it ends on a cliffhanger. I will give this series one more book because I’m interested in the overarching storyline. But if it doesn’t improve (at least to the quality of book one) I’m calling it done.

My family and I had a wonderful trip to Manchester, England and Yunnan Provence, China. That may seem an odd combination, but we went to Manchester to spend Christmas and New Years with family and then on to China for a wedding and time with friends.

We’re back now though. Which means the blog is open again. I have a few reviews to post from my time traveling. But I didn’t read anywhere near as much as I expected to. We simply did not stop. So, the only reading I did was on flights.

I read The Highest Tide, Blood of Elves, and One Dead Vampire. I was pleased with all of them.

The Highest Tide, by Marian Perera:

I liked this more than I expected to. I appreciated that the woman is the physically strong one who saves the day most of the time. She’s quite capable. I appreciate that she was allowed to be scarred, even if the author wasn’t willing to go as far as to let her heroine be ugly. Even scarred, men think she is beautiful. Which, of course, she can be. But I felt like the focus detracted from the fact that women don’t have to be beautiful, even if flawed, to be a heroine. It felt like the author got half-way there on not classically beautiful representation. But I’ll take what I can get. Similarly, I appreciated the little LGBTQ acceptance slipped in with no fuss or obvious ulterior motive.

As for the romance, I liked both characters and liked them together. But I didn’t feel the romance was well developed. Too much of the book has them avoiding each other, so there isn’t a lot of interaction. And for one of the characters the ‘love’ is so instant even he says he feels as if he’d been struck by lightning.

All in all, however, I’d be more than happy to read the rest of the series.

Blood of Elves, by Andrzej Sapkowski

This book got me through a 10 hour flight. It was nothing like I was expecting though. I expected a lot of fighting, like in the prequel short stories. Instead, I found a lot of humor as a group of clueless men try to figure out raising a young girl. I quite enjoyed it, though I found it slow at times and Sapkowski’s writing style a little sparse for my taste. I’ll be continuing the series though.

One Dead Vampire, by Kris Ripper

Cute & fluffy. I generally loved Rocky and all of the side characters, plus all the representation. There’s a fat and fabulous main character, several characters of varied sexual and gender identities—using any number of pronouns—and characters of several races. I do think this is a book not written for those invested in remaining with-in the confines of the comfortable majority. I suspect I’ll see more than one review saying all of the pronouns and such were unnecessary or too hard to keep track of. But I think that’s more a matter of what you’re used to. It certainly works.

I did feel like Rocky was too clueless about both the supernaturals and police procedure to have been raised in a supernatural cop family. Plus, I felt like all those cops/detectives enabling her compromising an investigation felt super unnatural. And the eventual reveal of the villain was too random to feel satisfying.

The romance is secondary to the mystery and pretty mild. But, as I liked both characters, I was willing to roll with it. I was less able to accept that Rocky had given up her best friend because the friend had the audacity to go away to college.

All in all, this was a higher than middle of the road read, but not five-stars for me. I’m well up for continuing the series though.