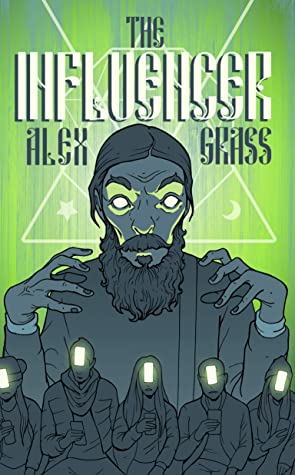 I won a copy of Alex Grass‘ The Influencer through Goodreads.

A Romanian sorcerer.
A nudist limo driver obsessed with Back to the Future.
A ten-foot-tall vigilante who mutilates their victims.

…and one old man who has been keeping a secret for half a century.

Out in the desert, a chasm opens that glows crimson below.
The possessed, cellphones drilled into their heads, run wild through the streets of New York.
And, a 24-hour MDMA-fueled dance party surrounding a site of ancient evil.

All this and more, in:

Standard ‘elitist’ attempt at erudition that just comes off as smug and self-important instead. It feels very much as if the author expected to throw out a lot of random, drug-fueled ideas and be called the newest Hunter S. Thompson. He takes pot shots at several groups of people, inferring ‘we’re’ smarter than they are and therefore they deserve their horrible fate.

I very much liked Yuma and her relationship with the men of the VFW. But she’s the only positive representation of women in the whole book. And I’ll note she’s very butch, so positively portrayed for enacting traditionally male traits, rather than for actually being female. The only other women of note are literally faceless and included solely for the sexual reward and gratification of a male character. (How very original. *eyeroll*)

The writing and editing are quite clean and the book is easily readable. There are a few stylistic decisions that readers will have to choose for themselves if they like, but they’re consistent throughout. But at 115 pages (the last bit being a preview of part II, though you’ll note that nowhere does this book say part I) this is ~1/3 of an actual story/book. Why do authors do this? It’s the true reason for my low rating. I understand breaking a 1500 page tome into parts for publication, but why a standard, probably 300ish page one? It left me with NO PAYOFF for having read it. No conclusion. Nothing significant learned? No significant desire for more, honestly. What’s the point of giving only the beginning?