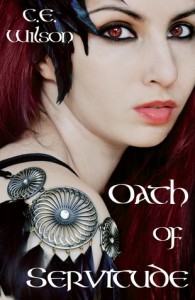 Author, C.E. Wilson sent me an e-copy of Oath of Servitude.

Synopsis from Smashwords:
Teague’s was the charmed life of a popular athlete that came to a crashing halt. Cailin is a pixi learning the price of nonconformity in her rigid clan. She fears the darkness. He is trapped there for all eternity. But when the two of them are thrown together, they begin to discover the light within themselves.

Oath of Servitude makes an interesting contribution to the paranormal genre. I don’t think I’ve ever read a book based on Pixi, or at least not one intended for anyone over five. I was a little afraid it might come across as super cheesy, but I’m happy to say that isn’t the case. The subject is handled admirably and makes for an enjoyable experience.

The story is a good one. While it focuses primarily on Cailin’s ability to help Teague come to terms with his situation there is a lot more going on in the background. Most of it I think is intended as a set up for the future books, because there is no resolution even attempted here. You are left wanting to know both what happened in the past and will happen in the future. I don’t mean this to suggest that you’re left wanting in the sense that something is lacking, but that you are left wanting out of interest. There is no doubt goodness to come.

The characters are easy to engage and empathise with, especially Teague. Individually I really liked him and Cailin…together, not so much. I had a hard time reconciling their sizes and never could accept their burgeoning feelings for one another. I honestly think that I would have preferred the story without the romance element, but that is a personal opinion only. I also thought that the whole thing felt rushed, not the writing but the plot. If Teague’s situation was so bad that Owen is willing to call in his last resort I find it unlikely that Teague’s demeanour would change so dramatically so quickly. Same for Cailin and Teague’s friendship. They have to overcome fear, trauma, mental injury, and more. Could they really have done all of that in a few short weeks? The book is relatively short, so it feels like there is room to expand. Again, this is just a personal opinion here. All-in-all it is well worth reading by YA fans, not to mention a mere $0.99. I look forward to seeing more of C.E. Wilson’s work. 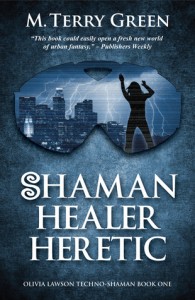 I grabbed Shaman, Healer, Heretic from the KDP free list.

Description from Goodreads:
Even for a techno-shaman, a kachina in the bedroom isn’t exactly part of the drill. When Olivia Lawson wakes to find one towering over her, she panics. A Hopi god visiting the real world isn’t just wrong-it’s impossible.

Soon Olivia learns that the kachina is the least of her worries. As she struggles to save her clients, clashes with other shamans, and fends off the attacks of real-world vigilantes, Olivia finds herself in the destructive path of a malevolent ancient force intent on leaving the spiritual realm to conquer this one.

Left with few options, Olivia is forced to defy centuries of shaman prohibitions. As she and her allies risk everything in their bid for survival, Olivia ultimately learns that the rules are there for a reason and that breaking them has a terrible cost.

Review:
Shaman, Healer, Heretic starts with a spark and retains it throughout. It is fast-paced and easy to get wrapped up in. Techno-shamans are an interesting addition to the paranormal genre and I really appreciated the inclusion of some lesser used cultural and religious references, Hopi and Sumerian for example.

I found some of it a little predictable, but this was more than compensated for by the engaging characters. While Green left some aspects of Livvy’s character shrouded in mystery she was a lot of fun. The other shamans each had a distinct character, adding variety to the book. On the downside, since the book is so fast-paced there wasn’t a lot of opportunity to become as invested in the characters as one did in the conclusion of the challenges presented. You liked them, but didn’t have a deep understanding of their personality. Mostly I would just callShaman, Healer, Heretic a fun, quick read. 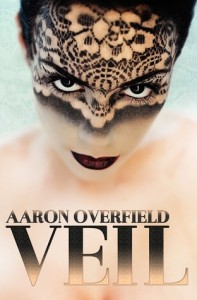 Author, Aaron Overfield, sent me an e-copy of his sic-fi novel VEIL.

Description from Goodreads:
Dr. Jin Tsay’s revelation entices the military with a potential to uncover and disarm any covert threats. The government that funded the engineer’s classified project orders Tsay’s death, so they can solely and secretly possess his alluring technological consummation: VEIL

Veil proves to be the purest, deepest form of espionage and anti-terrorism by endowing humankind with the ability to experience life through another person. Dr. Tsay’s technology offers submersion into another’s mind; Veil provides a direct perception of their immediate thoughts, emotions, memories, and the rush of their most intimate senses. If it ever escapes the military’s relentlessly selfish grip, Veil swears to permanently alter the psychosocial, sexual, political, economic, and religious landscapes of our lives. Veil promises to usher in our ultimately unifying evolution: the New Veil World.

Retribution for Dr. Jin Tsay’s assassination comes in the form of his widow, who races to deliver Veil unto the world and share it freely, before those who ordered her husband’s murder can exploit it. Wielding the inescapable force of Veil, Suren Tsay seeks to inflict justice upon all those responsible for her husband’s demise, culminating in an unforgiving, brutal, obsessive hunt for the elusive killer of the father of the New Veil World: the Great Jin Tsay.

Taking Veil beyond limits Jin himself could’ve imagined, the revered Widow Tsay vows to get her revenge at any cost. Suren Tsay soon realizes she too must inhabit the world created by her husband’s invention and her own bloodlust.

Suren must learn to live in the New Veil World.
She must also fight to liberate it.

Review:
When the Widow Tsay decides to avenge the death of her husband the world will never be the same. In telling her story Aaron Overfield’s Veil presents a convincing and frightening vision of social evolution.

The absolute best part of this book is the way people relate to one another. Emotions aren’t just surface decoration, but are all encompassing. People love with their whole heart and hate just as strongly. They also contradictorily treat each other with complete irreverence. They call each other nasty names and fling politically incorrect insults at one another, as only those most comfortable with each other can. Most of which is really funny. So are a lot of the author’s interjections. While this makes the book a joy to read there really is a serious message here. What is the moral responsibility of science and scientists? What marks us out as individuals and how much of this is necessary to live appreciable human lives? Like Huxley or Orwell, Overfield forces the reader to imagine how dangerous it can be to give up too much of their autonomy, no matter how well-intentioned the organisation involved.

Despite the bold characters I wouldn’t consider the book to be character driven (unless you consider Veil as a character). It tends to leap at regular intervals, leaving the main cast to age unobserved. Every time it did this I thought, ‘no I want to know more about what happened next.’ I was quickly engrossed in the next epoch of Veil, however, and forgot my disappointment.

The book is quite long and does tend to repeat itself. This might or might not be a purposeful attempt to remind the reader of earlier events. I don’t know. Either way, while it is noticeable it isn’t particularly distracting.

If you pick this one up I recommend reading all of the book, and by all of it I mean everything from the copyright page to the epilogue and beyond. It’s worth it. (Not something I have cause to say often.)