It’s random blog post time. In other words, time for me to randomly give my opinion to the ether space that is the internet. So, how did we get here?

You know that tweet demanding authors stop using pop culture references and everyone hates it?
That person is like 14. For real. So maybe calm down.

Which is apparently about this tweet* that the twitterverse dog-piled on the poster about: 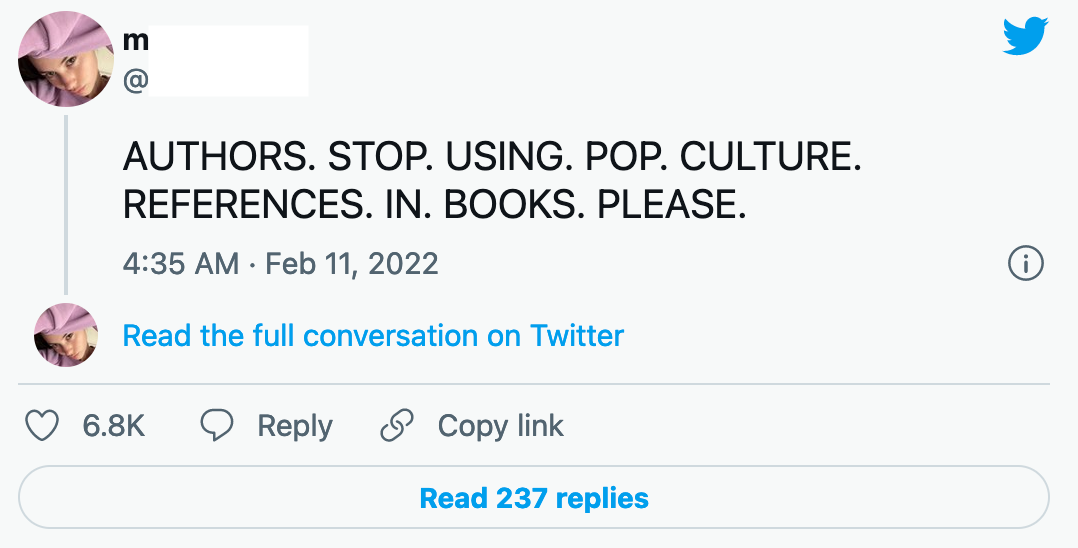 I actually missed the drama and went back to search it up after I saw Sadie’s tweet and got curious. I’m not going to get into the Twitter battle or if pop culture references are good or not (that’s too subjective to answer), but it did get me thinking about related things. Not so much pop culture reference, but the use of comparisons to actors as a substitute for character description**.

Yeah, I know it’s not the same. But it’s in the same ball park and I feel about this method of describing a character kind of how I imagine M. does about pop culture references. (Notice the imagine in there. I obviously don’t know for sure.) But I figured I’d give you a run down of the thought process that brought me to this post. And it followed the track of Sadie, to M., to ‘Yeah, OK, I get that,” to “That’s kinda how I feel about using actor references instead of character descriptions.”

As others have pointed out, if M. is 14 she may simply be too young to feel engaged in many of the pop culture references she’s encountering (and some of us may be too old for new ones). Which is a legitimate reason to dislike seeing pop culture references in her books and to have an opinion on the matter. Others have different opinions and that’s fine too.

While there are several reasons I dislike it when authors say, “He looked like a bad boy version of Ryan Reynolds,” or a “lawyer-slick version of Zac Effron” instead of writing an actual visual description, one is simply that I can’t easily engage with it. For many years (while I was working on my last Masters, for example) I didn’t own a TV and I rarely went to the movies. Even after I finished the university program, I threw myself back into books for fun and still almost never watched television or went to the cinema. When I came to a description of “he looked like a grown up Jharrel Jerome,” I often had to literally stop and google the actor to see what was meant (or ignore it and move on).

This was not only an ineffective means of relaying information to me, it was an actively annoying one. I simply didn’t know who the bright young things of Hollywood were, let alone one Chris from another. Like M. (maybe) not getting 1980s or 90s pop culture references, I had no reference for popular actors and actively disliked being reminded of it.

This is largely true today too. I do own a TV now, but I will take a book over that TV or the movies 9 nights out of 10.  But that 1 out of 10 gives me a little more reference than I had for a long time. At least I know some of the names and faces these days. (I only had to google about half the names for this post, for example.)

And this is the general point I’m making. Pop culture references and actor comparisons in place of character descriptions both assume knowledge on the part of the reader that they may not have. And that’s fine, of course. It’s up to the author to decide who they want their intended audience to be and those of us on the outside just kind of have to suck it up. We can have opinions on the matter, but that’s all they are.

But if an author chooses to exclude those without that referenced knowledge (due to age, growing up in a different culture, or not being part of a certain group/subgroup, etcetera) they have to accept that those left out might mention, “Hey, this sucks for us.” I don’t think either group—reader or writer—should get salty about it. But I don’t see any issue with acknowledging it.

Here’s where it gets a little iffy for me. I would like to think that when authors chose to use a pop culture reference or compare their sexy male lead to Jason Momoa or Idris Elba (thereby including some and excluding some other readers) they are doing so consciously and conscientiously. But let’s be honest, there are plenty of times authors don’t consider who they are excluding. Because they are human and humans have a disconcerting tendency to think everyone is just like them—that we all know/like the same jokes and pop culture, are attracted to the same actors, etcetera.

So, please, do what your gonna do. But at least do it with the knowledge and acknowledgement that you are doing it!

And that’s where my ‘M. disliked pop culture reference and I similarly dislike actor names in place of character descriptions’ comparison ends. But I also want to take a moment to further make my case that using such actor comparisons in place of physical descriptions is a poor choice on the part of the author, IMO.

One of the reasons I would rather read a book before seeing a movie is that I want the chance to bring a world and its inhabitants to life in my head, without the influence of the casting director. I want to imagine what a character looks like. But if you hand me a picture, it’s almost certain that’s going to be the image in my head. I don’t want YOUR image. I want MY image. And you steal my opportunity to develop that when you just say, “He looks like John Cho.”

What’s more, in my opinion, it’s just plain feels lazy. Did you not develop a new image for this character yourself? Did you have a “Main Character Pinterest Board” curated from the internet and just describe what you were looking at, not what you imagined? That’s the bitchy side of me coming out, I admit. But I genuinely feel like slapping on a “He looked like Taye Diggs” is just lazy writing. You say in one sentence what might otherwise take a paragraph. I want the paragraph! I want all the lush language that will make me drool, not that clinical comparison that is just dull, unimaginative, and boring! You want me to know he looks like Taye Diggs, then describe Taye Diggs so well I can’t help but cultivate that image in my head. Make us share this vision with your skill.

Further, in the case of romantic or erotic fiction, describing your sexy hero by saying, “He looked like Tom Holland,” assumes we all find Tom Holland equally attractive. It assumes I find Tom Holland attractive enough to imagine him as the sexy hero. It ignores that I might not find Tom Holland attractive or want to image him as a sexy lead. I’m 44yo, for example, he looks too young to fill that role for me, personally. So, coming across such a comparison either ruins the sexy hero for me or requires I ignore your image entirely, which tend to pull me out of the narrative. Either way it’s doing your book no favors.

There’s also simply the matter of how badly such comparisons can date a book. If you compare your main character to Patrick Swayze I know the book is from the late 80 or early 90s as surely as if they carried pagers. I imagine a comparison to Benedict Cumberbatch will feel the same in a few years time. (Not to suggest his popularity won’t last!)

I have no idea if this qualifies as an unpopular opinion or not. And I’m certainly not making any broad-sweeping dictates to authors. But if one reader’s opinion matters, this is mine. Please describe your characters using words, not Hollywood comparisons.

*I screenshot this tweet and obscured the name because, if the poster really is 14, she doesn’t need more drama in her inbox. I left Sadie’s name since she’s an adult.

**For the sake of simplicity I’m going to say actors and use male examples. But this obviously isn’t a single gender issue. (Though I have definitely noticed it more with authors, especially romance authors, doing this for their hero more often than the heroine.)

Note: All the images in the banner came from Imbd.

2 thoughts on “Describe your characters to me. Don’t compare them to actors.”