I accepted a review copy of The Complete Series Omnibus Edition of Heathen by Natasha Alterici (author/artist/colorist), Ashley A. Woods (Illustrations), Rachel Deering (Letterer) and Morgan Martinez (designer). The graphic novel was also featured over on Sadie’s Spotlight. So, you can hop over there for author/artist information and Rockstar Book Tours‘ tour schedule. 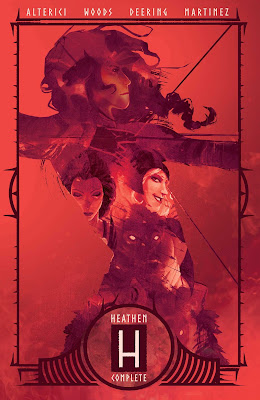 THE GODS MUST PAY…

Born into a time of warfare, suffering, and subjugation of women, and exiled from her village for kissing another woman, the lesbian Viking warrior, Aydis, sets out to destroy the god-king Odin and end his oppressive reign. She is a friend to many as she is joined by mermaids, immortals, Valkyries, and the talking horse, Saga. But she is also a fearsome enemy to the demons and fantastic monsters that populate the land.

I enjoyed the heck out of this, and, my goodness, could it be any more timely, with its ‘throwing off the oppressive yoke of the patriarchy’ theme? At one point, a character even explicitly says, “Each one of us is the person she is because we reject the authority of men.” And let me tell you, Odin (the representation of male authority here) does not give that oppressive authority up easily, nor the insistence that it’s actually benevolence.

I also loved the art style. I’m admittedly picky about what I like and don’t like in the graphic part of a graphic novel, but I like this a lot. I did find all the female flesh on display an odd choice. I’m not necessarily bothered by it—and sure women can enjoy it too—but all the…I’m gonna call it fan-service…has always seemed very male-gazey to me. And that just felt out of place in a graphic novel that so explicitly was addressing female liberation (sexual and otherwise) from male dictatorship and control.

I also thought the last volume felt far more rushed than the previous ones, and therefore the ending was a little anti-climactic. All in all, however, this was a winner for me.