Right here at the end of the year, I am still trying to clear off my less-than-100-pages shelf. I suppose I’m finishing as I started this particular trip around the sun. The task probably would have been more successful if I hadn’t managed to download as many shorts as I read.

Well, in my head I call them short stories, even though I know technically they’re novellas or novelettes. The thing is I’m not a big fan of short stories. Plus, having a ton of them clutters everything up when I’m otherwise looking for a novel to read. But somehow I always seem to be finding more. Why? WHY? How? I just don’t even know.

I’ve written seven other such posts, this year, where I cluster a number of short stories together for review. I’ve clustered them by page length (novelettes less than 40 pages, 40-59 pages,  60-69 pages and 70-79 pages) by duologies, and by request.

Most recently, I decided to group a number of them by authors I’ve had at least some minor interaction with online, be it an exchanged tweet, passing comment in a forum, an email, a note in a won book, review request received since I did the request post, erroneous inferences that I set out to screw them personally, discussion on our mutual love of manga, whatever. None of them I know well or in real life, but all of them I remember at least nodding digital heads with on occasion and, of course, the book is under 100 pages and I already own it.

When I went through my To Be Read shelf, these are what I found: 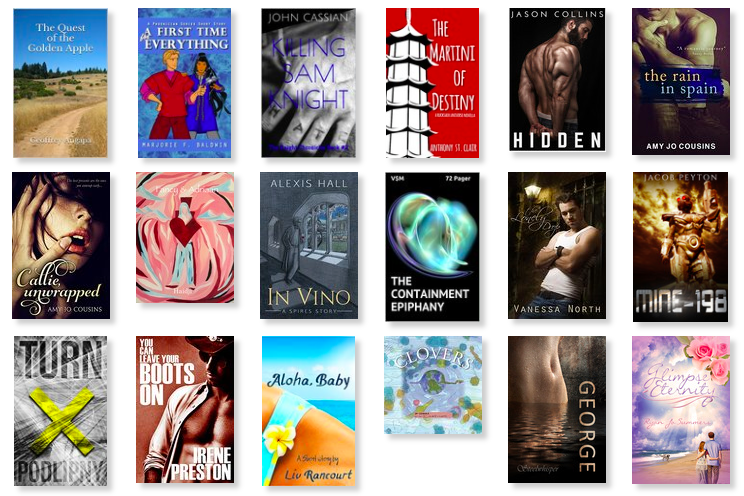 And here are the reviews in no order beyond the order that I happened to read them in. This was a task not accomplished in a day, by the way.

Aloha, Baby, by Liv Rancourt:
A sweet, clean romance set in Hawaii in the early 90s, just not a time period things tend to be set in, which made it especially amusing.  But it was also endearing.

You Can Leave Your Boots On, by Irene Preston:
Two sexy characters, some smexy time that was hot but not too graphic, a POC main character, and a HEA. Not much not to like here. I was a little squinked out by one character pressuring another out of the closet, especially when the family involved was perceived as very anti-gay and there could have been severe ramifications, but otherwise an enjoyable novella. I enjoy Preston’s voice quite a bit.

The Lonely Drop, by Vanessa North:
I thought this was sweet and I enjoyed it. But it’s basically two men who can’t communicate. Had either one spoken up about what they wanted they could have missed out on all the angst. I mean, neither hid it very well. I always find such stories a frustrating read. But again, aww-inducing and well written.

Turn, by David Podlipny:
This is one of those stories that is trying so hard to be something significant that it undermines itself and becomes substance-less instead. I liked Sono and his grandfather. I liked that you could feel their affection for each other. It was almost enough to overcome how very staged their conversations were. Like Podlipny was just desperate to be seen as witty and insightful. But in the end it wasn’t enough to carry the story.

The thing is that I would have put up with overly sarcastic banter and stiff, PURPLE prose but the book had no discernible plot. There is a lot of explaining the world, but no reason that we’re there following Sono in the first place. What’s more, you can feel from a very early stage how the book will end—in some predictably unpredictable strangeness that leaves the reader wondering WTF they just read and what the point was. I might not have guessed exactly what twist of reality would be dropped in the readers lap, but I saw the ‘let me blow your mind with the unexpected’ coming from a very long way off and was just as disappointed by it as I expected to be. Had it managed to pull the random discussions together, it could have redeemed the book. But it didn’t.

In the end, I finished Turn thinking, “Well, that was a collection of random words that went nowhere and accomplished nothing.” Maybe it was just too esoteric for me. Maybe I’m not smart enough for it. Whatever, it was prettily written but that’s about it.

The Martini of Destin,y by Anthony St. Clair:
An interesting read with sharp writing and dialogue. I did feel a little like I was missing a chunk of history to give everything context, but basically enjoyable. As an aside, I thought the cover (front and back) were unusually well done for an indie publication.

Fancy & Adriaan, by Haidji
I’m torn about what to feel about this book. I read the first ten or so pages and thought, “This is a disaster.” Then I started again, reading it aloud to my 6 & 9-year-old. Reading it aloud forced me to pay more attention to and adhere more strictly to the odd stanzas and punctuation, made it more poem-like and I had to concede it wasn’t as big a mess as I’d first thought.

Even conceding that this might be more poem than story, I was still unconvinced of it’s genius though. It contradicted itself, as so:

Thinking of nothing.
He woke up there,
In the dark,
Thinking of a way to go out of there.

It didn’t seem to have a grasp of grammar in the paragraphs that weren’t in strangely broken lines (assuming the broken lines are purposeful). And the fact that some was in line poetry and some in regular paragraphs was off-putting. It honestly felt more like bad formatting than artistic effect, but I doubt (desperately hope) that’s not the case. It didn’t explain some of the sudden developments and it took unexplained detours at times.

Saying all that, it was cute. It did have a romantic theme and the children liked it. So, read at your own risk. Maybe you’ll see more in it than me and prove I just don’t have the chops to make an art critic.

The Containment Epiphany, by Vincent Moneymaker:
An interesting idea that doesn’t quite carry all the way through in the writing. The dialogue is stiff and stilted. The science hand-wavy. The ending unexpected, but a little too abrupt to feel satisfying and it completely drops the question of the implications of the technology the story is about, i.e. the theme of the story up to that point. There are a few humorous lines and it presents an interesting thought problem. What would the government do with technology like this? But it’s all a little too flat and presented straightforwardly.

In Vino ,by Alexis Hall:
Funny and freakin’ hot, but made my heart hurt too.

George, by Steelwhisper:
All well written. The beginning was outside my comfort zone and, given the rest of the story, felt unnecessary. There wasn’t enough world to give it context and a place. But I would have liked for them to be. I’d have happily read it. The last part was really lovely and I would have very much enjoyed knowing the rest of their story.

The Rain in Spain, by Amy Jo Cousins:
Oh God, just unbelievably fraught and sweet. I was full of feelz.

Clovers, by Samira:
DNF 28%. I’m sure it’s witty and clever to some people. However, at 28% I have 100% no idea what is supposed to be going on. Too much wordplay, not enough substance.

Killing Sam Knight (The Knight Chronicles, #2), by John Cassian:
Like the first book, I enjoyed getting inside the killers head. ‘Sam’ is a surprisingly likable serial rapist/killer. Though he is quite a bit more introspective that is believable. Here we see it all fall apart. I found some surprisingly light, funny moments, had trouble with the single rape scene (I always do) and I thought the ending unlikely. But the writing was stellar and I’d probably read a third installment.

MINE-198 (The Salvager’s War #1), by Jacob Peyton:
Fairly standard sci-fi horror. Editing needed a bit of work, but the writing was generally ok. Though it occasionally fell apart with passages like, “John screamed and he screamed, but the only people left to hear him scream, were the dead.” Not bad, but not great either.

The Quest of the Golden Apple, by Geoffrey Angapa:
DNF 7%, end of chapter one. It’s painfully over-written, but I think intended for young children who might enjoy such style. Not for me at almost 40, however.