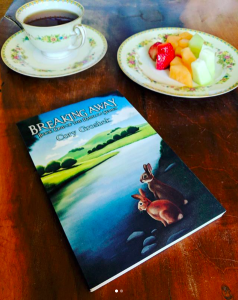 I won a copy of Breaking Away

, by Cory Groshek, through Goodreads.

Description:
Life is hard in the poverty-stricken village of Rabylon, where rabbits work every day from sun up to sun down, earning just enough carrots to survive-except for Mayor Monty Cottonsworth III, who lives in the lap of luxury as his villagers starve. Twin bunnies Remy and Rhea, fed up with working so long and so hard with nothing to show for it, desperately desire a better life, but don’t know how to achieve it. Just when they are about to give up hope, they are inspired by the story of a mythical carrot paradise that may exist on the other side of a big, green hill outside of their village. Now they face the most difficult decision they’ve ever had to make: Do they “play it safe” by staying in Rabylon and settle for a life of lack, loss, and limitation? Or do they risk it all-up to and including their lives-on the chance that out there somewhere is a life worth dying for?

Review (with spoiler):
This is middle grade or below fiction. Though I would suggest it be read by an adult, as I think some of the ideas too advanced for such readers. Basically, a man (or male rabbit) sells a town on the idea of a communist heaven and then enslaves them as soon as he has control of the resources.

As many such books, the plot is predicated on the idea that all knowledge can somehow be lost in a generation or two, if you just take away the books. I always have trouble with this idea. (As if parents wouldn’t teach their children what is safe to eat from memory, even if they don’t have a book, for example.) But we’ll overlook this. We’ll also overlook the strange feelings and mysterious ideas that pop into Remy and Rhea’s head from seemingly outside sources that I interpreted as being from God. (I’m not religious and didn’t find this a particularly welcome addition, but whatever.)

What I want to discuss is the ending. Remy and Rhea reach their magical carrot paradise. They have adventures and learn and grow in the process. This is all wonderful and allows for some good lessons for young readers. But that’s it. They reach the town and presumably live happily ever after. But….but what about their family and friends and everyone they left behind living under a tyrant? What good is all their hard earned knowledge if they don’t take it home and share it, don’t use it to right the wrongs in their collective lives? It left the book feeling pointless, IMO. I’ll grant that it is a first book in a series, so hopefully the bunnies go home in some future books. But there’s no clue that that’s the plan in this one.

The writing and editing seemed clean and easy to read though.