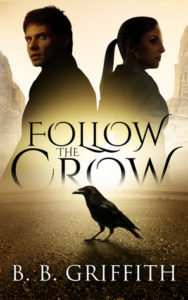 Follow the Crow, by B. B. Griffith, is a perma-freebie on Amazon. Or at least it’s been free every time I’ve looked at it. I picked it up there, in June of 2015.

Description from Goodreads:
Ben Dejooli is a Navajo cop who can’t escape his past. Six years ago his little sister Ana vanished without a trace. His best friend saw what happened but he refuses to speak of what he knows, and so was banished from the Navajo tribe. That was the day the crows started following Ben.

Caroline Adams is a nurse with a special talent: she sees things others can’t see. She knows that Ben is more than he seems, and that the crows are trying to tell him something.

What the crows know could shed new light on the mystery of Ana’s disappearance, or it could place Ben and Caroline at risk of vanishing just like she did.

Comment:
Before I review this book, I’d like to say a few words about my decision to read it. You can take them any way you like, as a warning, as a discussion opener, as a random tidbit, as praise or condemnation. Your choice. But as a reader, these are the kinds of things I look at when choosing to read a book or not. I’m not dropping any sort of accusation, just being honest about what I think about some common observations.

Below is a screen shot of part of this book’s review page on Goodreads. I spend a lot of time over there deciding what interests me or not and reviews influence me. Not just good ones or bad ones and there is no magic number, but I find it suspicious when I see things like this. Note several reviews in a row with the same format—a brief, bold hook and then a one paragraph uninformative review. 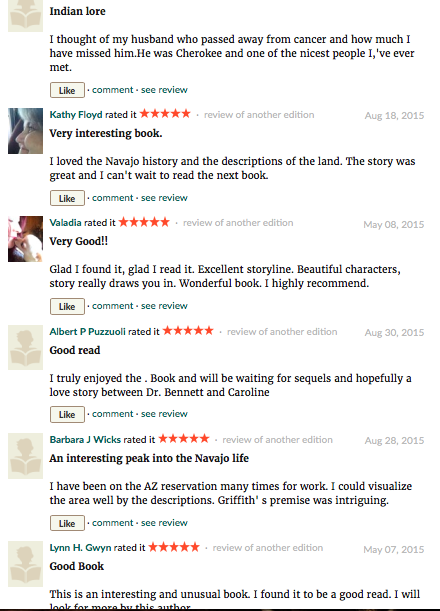 I find it unlikely that six people in a row chose to write their review in the same way. I find it damn near impossible to believe that (as of today) 48 of them did so, all but one giving the book a 4 or 5 star review and no-one using this format giving a 2 or a 1!

I’ve had this book on my TBR for almost a year and the blurb has always interested me. I’ve pulled it up several times and then, seeing the reviews, I put it away again. Because I strongly suspect the author is either part of some review circle or (more likely) purchased these reviews. I wish I could tell you which company it is, but the best I can do is mention that I’ve seen the same format on other book’s pages too. (I’m looking at you Shattered Skies.)

It’s only a suspicion of course, I can’t prove anything and I don’t consider it my job to do so. I mention it here because new authors hear over and over how they have to get reviews at all costs. But in cases like, this those same reviews drove me off.

What makes this especially tragic is that I generally enjoyed the book. I would have read it much much earlier had it not been tainted by this whiff of impropriety. Because experience has shown me that if an author feels the need to buy reviews to falsify the public perception of their book, then it’s probably not very good.

In the end, I opted to give it a chance. In part, I admit, to see if my past experience holds true, but I went into it fully expecting to give up and throw it on the DNF as unworthy of my time. That is the perception that reviews that appear faked create in me. And as readers aren’t blind to the obvious and aren’t stupid either, I suspect I’m not the only one.

Review:
This book has 3 first person narrators, which I enjoyed. But I can see it not going over well with everyone. It created a bit of an impression of tell, tell, tell that isn’t accurate, as it’s a character telling, not a distant narrator. But I really liked the characters voices. The author also has a talent for creating atmosphere. The descriptions of the reservation are quite vivid. I was also pleased with the twist to the romance. I was worried it wouldn’t work out like I wanted for a little while, but it did. (Please don’t ruin it in future books!)

There was a lot of “the Navaho” this and “the reservation” that and I don’t know enough about the Navaho or reservation life to comment on the accuracy of it. I never felt the author was purposefully insulting, but there were enough racial/cultural generalizations that I started to get a little squinked out, especially with the white doctor/nurse/saviors. I imagine the line of where such things become problematic is one it might take a Navaho to make, so I’ll just note it here and leave it at that.*

I did have some questions about why the grandmother would allow some of the tragedy to occur. There are big secrets; I get that. But some things—like what happened to Joe—she easily could have prevented or at least derailed. I also thought that the characters lacked depth. I liked them, but I didn’t really feel I knew them, despite their first person POV.

Lastly, the book is very obviously a (full-length) prequel to a longer series. That didn’t become apparent until the very end, but once it does it’s unmissable. But it looks like it could be an interesting series to pick up.

*When I cross-posted to Amazon, I noticed a review from a Navajo individual. I appreciated seeing their perspective.