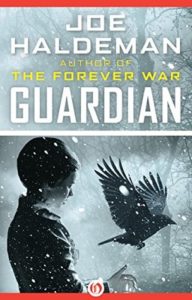 I received a copy of Guardian (by Joe Haldeman) from Netgalley.

Description from Goodreads:
Sent from her Georgia home to Philadelphia to escape the carnage of the Civil War, Rosa Coleman studied astronomy and mathematics, ultimately settling into a new life as the wife of a wealthy man and mother of young Daniel. But when she discovers an unforgiveable secret about her reprobate husband, Rosa takes the boy and flees to the West on a desperate escape that takes them from Dodge City to San Francisco one step ahead of the Pinkertons hired to bring them back home.

On the run in a strange and exhilarating new world, Rosa and Daniel find a haven where they might never be found: the wilds of Alaska among the dreamers drawn to its magnificent wilderness by the promise of gold. It is here that her spiritual guide first appears to Rosa in the form of a raven—an incarnation of the trickster god of Native American and Eskimo lore—suggesting that her destiny lies not in sparkling riches but in something far greater. This mystical harbinger has come from a distant, alien place, and will set her on an astonishing course . . .

Review:
Man, I was really enjoying that for a good 75% of it. I was wondering where the supposed science fiction was, since it hadn’t materialized yet, but I was enjoying the narrator’s slow, personal account of her travails. And then it all fell apart.

About 3/4 of the way through the unthinkable happens in the plot, and the pace picks up significantly, the tone changes, the science fiction makes a sudden appearance and departure and the book is wound to a very quick and less than satisfying ending.

Haldeman creates wonderful imagery and his narrative is engaging. This really was almost a winner for me, too bad about the ending.