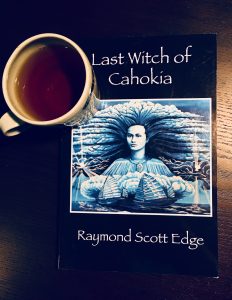 I picked up a copy of Last Witch of Cahokia, by Raymond Scott Edge, in my continued effort to read local books.

Description from Goodreads:
In the darkest hour of the night, a man dressed solely in black moves quietly among the tombstones. Finding the one he’s looking for, he begins to dig. The next morning the community of Alton, Illinois discovers that the remains of the cemetery’s most illustrious resident, Elijah Parish Lovejoy, are being held for ransom. The illusive grave robber Ghost Dancer demands a simple trade, the return of Lovejoy’s remains for the immediate reburial of thirty-six female skeletons taken from a Native American burial ground.

While Daniel struggles to respond to Ghost Dancer’s demands, his mentor and senior colleague, Fredrick Eldrege, is in China attempting to unravel the mystery surrounding an ancient painted buffalo skin found in the archives of Beijing University. Is it authentic? How did it get there? Are the thirty-seven women portrayed on the artifact associated with the recently excavated burial ground? If so, who is the 37th woman, and why is she dressed in silk?

Review:
I picked this up because it looked interesting and because I live about 25 miles from what’s left of Cahokia Mounds. At its peak, where I live was probably part of the extended populations. I even visited the park just a couple of weeks ago. So, I thought a novel about the local area could be interesting. It was.

Apparently, Last Witch of Cahokia is actually the third book in a series, which I didn’t know when I decided to read it. But I was perfectly able to follow it. The past books are referenced. For example, the first book in the series (Flight of the Piasa) is actually supposed to be written by one of the characters in this book and published by the publishing company that truly publishes the series. (Very meta, I know.) But none of that knowledge is necessary to follow this plot. So, it wasn’t a problem.

The story itself is interesting, both the modern and past plots. I liked the diversity of the characters. Several groups are represented well that you don’t see often, Mormons for example. You don’t see them painted as good people too often, outside their own fiction. Similarly, Native Americans, Chinese, a Chilean, and several white Americans are shown to have healthy, functioning relationships, and work lives. (I don’t remember any black characters. Certainly, no main character was. I’m hoping I just don’t remember a side character, maybe a student.)

There was some lazy plotting. For example, when one of the characters needed a chance to make up with his love interest, he chased her out a back door and, despite it being like 15 seconds since she exited, he still managed to find her being accosted and almost raped by a couple of rough biker types. Really, Edge couldn’t find a more creative, less often used, and more relevant-to-the-story way to reunite these two? I’m pretty sure I’ve read this same scene in about a million books, probably even including the bikers. It’s lazy writing of the worst kind. And making the ruffians bikers is stereotyping to boot, and not even accurate. It’s 2017, hasn’t Edge gotten the memo that most leather-clad bikers these days are actually upper-middle aged proctologists. They’re the only ones who can afford it anymore. I mean, have you been to Grafton? One to the characters in the book has, he ought to know.

Similarly lazy is the fact that one character is reading a manuscript, apparently, only a page or so at a time, since it took him weeks. But he does so each night after speaking to his wife, who goes to bed first and then wakes up over the book the next morning. This happens four or five times. Surely it’s not necessary to recycle the same scene like that.

Lastly, as someone who studied anthropology/archeology and focused largely on Native America, I was interested in that aspect of the book. But even I have to admit that though the repatriation of remains debate was really important, the last half of the book got REALLY preachy and didactic. When the author branched off to lecture on the difference between inductive and deductive reasoning, I forgot for a moment I was reading a novel and not a textbook.

All in all, the writing was good and the editing was pretty clean. I noticed a couple of small things, like yin (yin and yang) becoming yen. But mostly it wasn’t distracting, which is good enough for me most days. I’d be willing to read another Edge book.