I went to library and checked out Lord of the White Hell 1 & 2, by Ginn Hale. 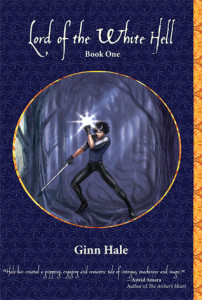 Description from Goodreads:
Kiram Kir-Zaki may be considered a mechanist prodigy among his own people, but when he becomes the first Haldiim ever admitted to the prestigious Sagrada Academy, he is thrown into a world where power, superstition and swordplay outweigh even the most scholarly of achievements.

But when the intimidation from his Cadeleonian classmates turns bloody, Kiram unexpectedly finds himself befriended by Javier Tornesal, the leader of a group of cardsharps, duelists and lotharios who call themselves Hellions.
However Javier is a dangerous friend to have. Wielder of the White Hell and sole heir of a dukedom, he is surrounded by rumors of forbidden seductions, murder and damnation. His enemies are many and any one of his secrets could not only end his life but Kiram’s as well.

Review:
What can I say, I liked it but I didn’t love it? The things I liked I liked a lot though. I liked the characters. I thought they were well rounded and engaging, even the side characters. Nestor and Fedeles struck me particularly. I liked Kiram’s tendency to speak his mind and Javier’s attempt to respect that, while still flirting. I liked the world and the setting. I liked the writing. It’s fairly simplistic, but the dialogue flowed well.

The things I didn’t like are a little less about the broad strokes though. I disliked the slow pace of the plot. If I’m honest, this is probably more a case of expecting more than the book ever intended to deliver in this department. It is largely a story about boys in a boarding school, with a little time dedicated to a larger conspiracy and I was looking forward to a bit more of a sweeping adventure. I disliked how the book ended. I understand what Hale did with the brothel scene, not only forcing Karim to acknowledge the reality of loving a man in such a repressive culture, but also the understanding of the other characters’ limited window to express affection. But I disliked it. I disliked that there are no women in the book, a couple mothers and whores are referenced but there are no female characters. I also thought the editing of the second half of the book started to falter.

I have book two and I’ll be reading it. But the series has lost a little of the luster it held when I was first starting out. Hopefully I can regain it. 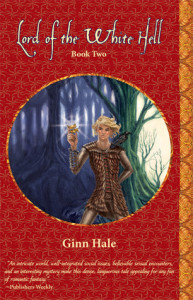 Kiram fought his family and Cadeleonian bigots to remain in the Sagrada Academy to prove himself as a mechanist and to dispel the deadly shadow curse that threatens to destroy his upperclassman, Javier Tornesal.

But when his efforts provoke retaliation, Kiram’s family and home are endangered. Both Kiram and Javier risk everything in a desperate gambit to combat the curse.

But they never imagined their battle would come so soon, or that it would be led by the one person they trust most of all.

Review:
I enjoyed this second book more than I did the first. In it I felt Javier and Kiram’s personalities came through more strongly and there was the action I was looking for in book one. I especially appreciated the way Javier is written as the sort of can-do-anything hero commonly seen in M/M but we’re also given his vulnerable, desperate side.

I was a little disappointed that the villain was so obvious. The foreshadowing for that particular twist started about 2/3 of the way through the last book. (I’m just hoping the reader was supposed to know, even if the characters didn’t.) And his defeat seemed a bit abrupt. I only have two other complaints. There are a few convenient saves in the plot, people who just happen to be in the right place to discover just the right thing to save the day. Also, Javier never fully acknowledged why Kiram pulled away from him in book one (the Brothel scene) even after he came to understand adari in Kiram’s culture and showed his own jealousies.

For the most part I ended this book quite happy. I’ll be looking for more of Hale’s writing.