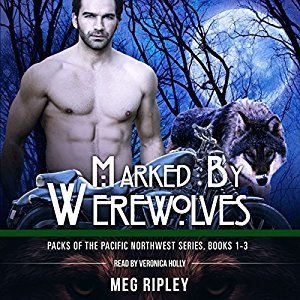 I received an Audible credit for a copy of Meg Ripley’s Marked by Werewolves box set.

Description from Goodreads:
I never imagined the drama that would ensue once Dwight stepped into my life.

All I wanted to do was to make a name for myself–to claim my little piece of the pie–and buy the neighborhood bar I’ve been working at for the last few years. Little did I know that I’d be attracting the Wolf Brotherhood into my life.

They want to stake their claim on my bar, but just because they’re the most feared werewolf biker pack in Portland doesn’t mean that I’ll just roll over and let them have what they want–not without a fight.

Well, I went a little too far one night and really ticked them off, and now Dwight has this twisted plan to stage my death to get the ‘Brotherhood off my back. He’s my maker, and my lover, so I should be able to trust him–and God, there’s just something about the fire in his touch that makes my troubles melt away; something about his deep, alluring gaze that pulls me in every time–but Dwight also happens to be a member of the ‘Brotherhood…

Now my sister Sera is getting roped in on the drama, and they’d better not lay a finger on her. Rumor has it, she’s teamed up with a rival pack to get to the bottom of my “death.”

They’ll stop at nothing to take me out, but I’m tired of being their victim; the Wolf Brotherhood has no idea what’s about to hit them.

They’ve messed with the wrong chick this time.

Review:
I don’t usually use star ratings on the blog, though I often begrudgingly  assign them when I cross-post to other sites. But for this one, I think I need numbers.

Overall, I’d give this compilation a 2.25. But I’ll discount the first ‘book’ and its rating and round up to 3. Below you’ll find my thoughts on the individual books. Veronica Holly did a fine job with the narration. I noticed a couple hiccups toward the end, but not enough to really bother me.

Claimed by the Wolf Brotherhood
1*
Not a story, barely even a prologue. If I was incline to rate it on its own, as opposed to part of the boxed compilation of books 1-3 I have, it would be very low indeed. It’s basically useless on its own.

Werewolf Baby Daddy
2*
Not an abysmal showing, and not outside what you’d expect from a fated mates werewolf novella. But full of shallow, undeveloped characters, insta-love, sex=relationship, no world-building, a shadow villain that you won’t even know at all if you haven’t read the useless-on-its-own-but-apparently-vital-this-book-so-why-is-it-seperated-out 30 page prequel, Claimed by the Wolf Brotherhood, and a cliffhanger. So, not a real winner but again there is a whole sub-genre of just this sort of pared-down stories that some people seem to like. I was pretty meh about the whole thing and bitter about the 30 page “book 1.”

The Wolf Pack’s Revenge
2.5, round up to 3*
Better than the first two “books.” I put that in quotation marks because “book 1” isn’t a book by any definition I can imagine and I’m irritated by this trend authors seem to be developing of publishing teasers without accurately labeling them as such. But none of these stories stand alone, so I can’t just pretend it didn’t exist. Either way, The Wolf Pack’s Revengeis an improvement. The writing is better and it was a more complete story than either of the previous stories. The characters were still shallow, though I have to admit to liking how caring the heroes are (no alpha A-holes). The plot was still thin. But it is still only a novella, so what can I expect. All in all, ok if you like this sort of pared down story.