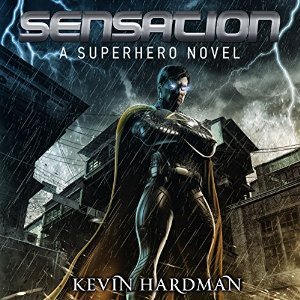 I received an Audible credit for a copy of Sensation, by Kevin Hardman.

Description from Goodreads:
Like millions of other kids, Jim grew up wanting to be a superhero. Unlike most of his contemporaries, however, Jim actually had the goods: a plethora of super powers that would have been the envy of any meta on the planet. But when his tryout with the Alpha League – the world’s premiere group of supers – goes disastrously wrong, Jim basically becomes an outcast.

Two years later, Jim is still bitter about what happened to him. However, he soon finds himself the centerpiece in an odd turn of events that gives him a second chance at his dream. But nothing is as easy as it sounds, as Jim soon discovers. Among other things, he’s made an enemy of a prospective super teammate, he’s being stalked by an unknown pursuer, and a shadowy cabal bent on world domination has identified him as the only obstacle to their plans.

It’s a lot for one super to handle, even with a smorgasbord of abilities. But if saving the world were easy, everyone would do it…

Review.
Amusing, but about as substantive as the comics it is obviously modeled on. This isn’t wholly bad. There is a lot of humor here and obviously a large world has been envisioned, though we’re only given small glimpses of it. But the plot itself it fairly thin and predictable and I didn’t sense much growth in the characters. The main character, Jim, is a little too perfect to be believed and seems far too mature for 16.

Despite generally good writing, there is a lengthy and largely unneeded flashback that disrupts the flow of the story. The narrator, Mikael Naramore did a fine job too. I liked his reading, but not so much his attempts at accents. All in all, it wasn’t a total disappointment. I really think teens will enjoy the heck out of it. But I found it a so-so read (listen).