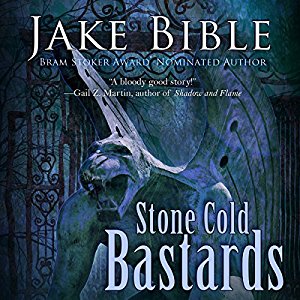 I received an audible copy of Jake Bible‘s Stone Cold Bastards for review.

Description from Goodreads:
Only a rag-tag team of gargoyles stands between humanity and extinction.

Hell has released its ravening horde of demons, leaving most of humanity a puke-spewing, head-spinning mess of possession.

Humanity’s last hope? A team of misfit gargoyles—including a cigar chomping, hard-ass grotesque—come alive and ready for battle during the End of Days. They guard the last cathedral-turned-sanctuary atop a bald knoll in the North Carolina mountains.

Gargoyle protection grudgingly extends to any human who can make it inside the Sanctuary, but the power of the stonecutter blood magic, which protects the sanctuary, may not be enough when a rogue grotesque and his badly-wounded ward arrive.

All the hounds of hell are on their heels. The last Sanctuary is about to fall.

Review:
I rather enjoyed this. I had a few complaints, namely that the human bodies in this book appeared to have a consistency somewhere between a ripe tomato and play-doe. I don’t generally have a problem with gore in a novel, but there was a lot in this book. And where it didn’t bother me on its own, the fact that grotesques (gargoyles…notably not gargoyles, but gargoyles for the linguistically challenged) seemed able to produce it in a manner that seemed to disregard physics and tensile, bodily durability grated on my nerves. I got seriously sick of heads getting ripped off, spines yanked out, skulls popped, etc. Not because of the gore factor, but because it was too clean, easy and pervasive.

Secondly, I didn’t think humans were represented well or realistically. They were all either weak to their flesh and causing devastation or cowering in a corner. They were almost all essentially characterless. Given the circumstance, I would expect a little more human resilience.

Beyond those complaints, I loved grumpy Morty and the rest of the sanctuary crew. I liked the idea of the demon apocalypse and the ending.

All in all, not a book that is going to make the favorites list, but not one I regret listening to either. Hays did a fine job narrating it.