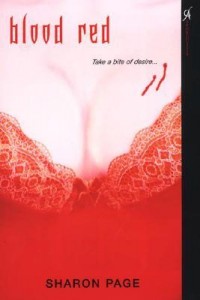 I grabbed a practically new (maybe even new) paperback copy of this book at the secondhand shop.

Description from Goodreads:
Take a bite of desire…

Review:
I’m gonna use a star rating here and go with three stars for this book. But that needs to be understood as three stars on the erotica rating scale. I’m not really suggesting there is a whole different grading system for erotica, but we all know to expect less plotting, character development and world-building from an erotica than from, say, literary fiction. So a three star erotica is still going to have less of all of the above and readers accept that as par for the course.

For all the forced variety there was also a certain innocence to the book. Maybe it’s because it is a couple years old and the current publishing rage is questionable consensuality, forced seduction, heavy BDSM, dominate men and simpering submissive women. I really appreciated that every sex scene in this book is clearly consensual. Althea (what the hell kind of name is that BTW) may be a virgin when she meets Yannick, but she takes to sex with enthusiasm. I did begin to wonder just how much she could experience before she lost that same innocence that the twins love so much, but it’s hardly a point worth thinking too deeply about.