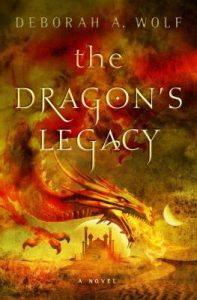 I borrowed a copy of Deborah A. Wolf’s The Dragon’s Legacy from my local library.

Description from Goodreads:
The last Aturan King is dying, and as his strength fades so does his hold on sa and ka. Control of this power is a deadly lure; the Emperor stirs in his Forbidden City to the East, while deep in the Seared Lands, the whispering voices of Eth bring secret death. Eight men and women take their first steps along the paths to war, barely realizing that their world will soon face a much greater threat; at the heart of the world, the Dragon stirs in her sleep. A warrior would become Queen, a Queen would become a monster, and a young boy plays his bird-skull flute to keep the shadows of death at bay.

Review:
Are you ready to dive into an epic series in which the first 486 page book is nothing more than the characters getting on the board and doesn’t do anything more than set up future book? Well, this is the book for you!

I was not ready for that. I was ready for a 486 page story. I got a 486 page introduction, maybe a prologue. It was not enough. I ended this book disappointed…and it took me forever and a day to read it. I got sooo tired of having to reference the three(!) dictionaries in the front. Thank god they were there, but did the book need its own freakin’ language?

The writing was pretty, though quite purple on occasion and I liked how some of the gender tropes were subverted. But part of me is side-eyeing that same subversion. Is it really a subversive if it’s just been flipped, not really explored in any depth.

As an aside, I was consistently annoyed that this appeared to be another world, but there were several very earth-like jokes and references. Like a quip about knowing poor Yorick well. Perhaps its meant as a future earth, but there were at least two suns for example, so I thought not. Each such comment felt anachronistic to me.

All in all, not a bad book, but not at all what I was looking for.